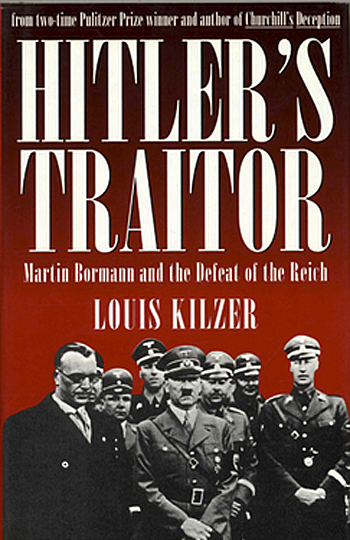 Hitler’s Traitor: Martin Bormann and the Defeat of the Reich by Louis C. Kilzer

This is a great book, and once again I must disagree respectfully with the average reviewer in the case of one of Louis Kilzer’s books! Incidentally, I don’t know Mr. Kilzer personally, but I do know of his journalistic accomplishments and salute him for this and for writing yet another very remarkable book, Churchill’s Deception: The Dark Secret That Destroyed Nazi Germany!

I believe some reviewers did not pay careful attention to his evidence and the suspenseful details in the narrative. I believe that in the zeitgeist of our times, Mr. Kilzer simply did not demonize Adolf Hitler enough, as is expected of all writers discussing any details in the life of the German Chancellor. We can objectively discuss Stalin’s industrialization record, Five-Year Plans, and military record, but not so Hitler’s. It is not politically correct!

And for the record, let me categorically state that Hitler was a monster, yes a monster, but no worse than Joseph Stalin, who, at least quantitatively in the number of atrocities and murders of innocent victims, vastly outmatched Hitler, in both war or peacetime perversity.

That said, Mr. Klizer does provide evidence, beyond the shadow of a doubt, that Martin Bormann was indeed the spy-traitor, “Werther,” spying from deep inside the Third Reich. He was the only person that was able to attend all the meetings in question, or if not, to have his informants and official stenographers record in minute details the German High Command’s top secret transactions and military plans. Thus he was capable of relaying information to the Russians, even before the German generals were able to review and put them into action! Not even Ultra, the secret decoding of the German Enigma code, Winston Churchill’s secret weapon at Bletchley Park, was able to provide this information and feedback!

Werther was not only able to have secret German military plans radioed to Moscow Center via the master spy Rudolf Roessler (code name “Lucy”) and his spy ring in Switzerland immediately after Wehrmacht conferences were over, but also let Stalin know who attended the conference and what each of the conferees stated. Werther was even capable of answering specific questions posed by Moscow center (i.e., “Gisela,” the young, attractive, secretive, Jewish, Russian Spymaster, Maria Poliakova). Kilzer shows that only one man was in the key (and only position), where he was able to do so, and that man could have only been Martin Bormann, the Fuhrer’s trusted secretary!

Hitler was ruthless, but despite what we may have been led to believe, unlike Stalin, he was not a paranoid individual, and he allowed treasonous activity to thrive within the military (e.g., Generals Ludwig Beck and Georg Thomas), the police (e.g., Heinrich Muller, left-wing, head of the Gestapo and creator of the funkspiel, radio playback messages to Moscow), and even German military Intelligence (e.g., the official Hans Bernd Gisevius, General Hans Oster, and Admiral Wilhelm Canaris, head of the Abwehr).

It was not until this serious attempt on his life by Colonel Claus von Stauffenberg at the Wolf’s Lair on July 10, 1944, that Hitler struck back with a vengeance against the conspirators. Only then (and as the Third Reich rapidly crumbled) did he become sadistically vindictive and unforgiving against his opponents within the German military. And yet, he never distrusted Martin Bormann, the “faithful” secretary, “who could get things done.” On April 30, 1945, as he prepared for death, Hitler made Bormann the executor of his will and praised him as his “most faithful party comrade.”

But Admiral Canaris, himself an honorary member of the Black Orchestra, suspected Bormann, the “Brown Bolshevik.” One of Bormann’s mistresses was a communist operative in the German resistance, but that was not then known, and he was not suspected. Some of the surviving top Nazis did come to suspect Bormann’s betrayal to the Russians — but only as the piece meal revelations came to light at the Nuremberg war crime trials, as they were being prosecuted. On the stand, when the prosecutor asked if he believed Bormann was dead, Reichsmarshall Hermann Goring replied, “… I hope he is frying in hell. But I don’t know.”

What information did the spy-traitor, Werther, provide to Moscow Center that was so vital to the Soviets? No less than very detailed and specific military intelligence that led to the defeat of the Wehrmacht at the pivotal Battle of Stalingrad in the winter of 1942-43 and the decisive Battle of Kursk (i.e., the largest tank battle in history) during the spring and early summer of 1943, from which the Third Reich did not recover the initiative in the Eastern front.

The only question remaining for this reviewer is this: Why did Bormann not seek a timely escape route to communist Russia before the final collapse of the Reich? That is the 64 million dollar question. He might have been guarding his identity even from the Soviets. To escape, he attempted, but to surrender, he probably thought, would be futile! He had interpreted and carried out the Fuhrer’s order of genocide of the Jews during the Holocaust and the elimination of the Ukrainians during the Wehrmacht drive to the east. And his betrayal was ideological, but we will probably never have all the answers.

Thumbs up! This non-fiction, suspense thriller is recommended for both history buffs and spy aficionados, as a book that merits reading in the realm of Soviet-Nazi World War II espionage, for those with an ear for the deadly symphonies of betrayal played by the Red and Black Orchestras.

Miguel A. Faria, M.D. is author of Cuba in Revolution: Escape From a Lost Paradise (2002)

This article may be cited as: Faria MA. Hitler’s Traitor: Martin Bormann and the Defeat of the Reich by Louis C. Kilzer. HaciendaPublishing.com, June 26, 2011. Available from: https://haciendapublishing.com/hitlers-traitor-martin-bormann-and-the-defeat-of-the-reich-by-louis-c-kilzer/.

This book review on Hitler’s Traitor: Martin Bormann and the Defeat of the Reich by Louis C. Kilzer (2000) was originally published on Amazon.com on June 26, 2011, and was featured in RealClearHistory.com on February 12, 2013.