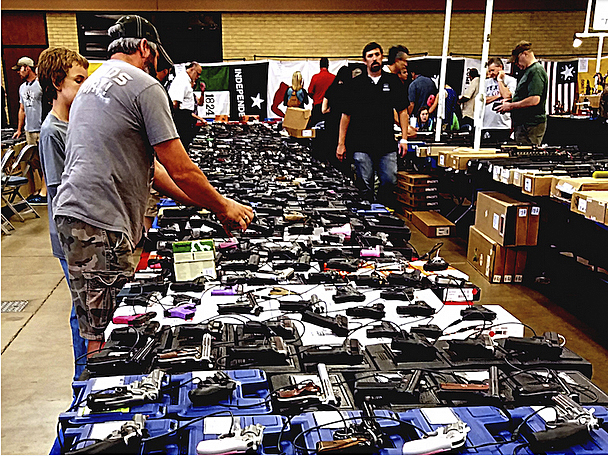 Gun Shows and Gun Control: McCain Is at It Again!

Sen. John McCain, R-Ariz., is at it again, preaching draconian gun control. He has now paired himself with “the conscience” of the Senate, Sen. Joseph Lieberman, D-Conn., and joined forces with the national anti-gun group Americans for Gun Safety (AGS), a lobbying group that has been shown to have neither members, gun safety programs, nor credibility.

Sen. McCain and his anti-Second Amendment crowd are not going after “closing loopholes,” as they claimed last year, but after shutting down all gun shows.

Using a pincer strategy that would make the Italian Marxist theoretician Antonio Gramsci proud, AGS is launching a nationwide million-dollar ad campaign to help influence public opinion in support of the new gun control bill from below, while Sens. McCain and Lieberman threaten to shut down gun shows from above, via legislation.

As David Kopel of the Independence Institute has written:

“Anyone engaged in the business of selling firearms is required to be licensed by the Bureau of Alcohol, Tobacco, and Firearms (18 U. S. Code, Sect. 923(a)). According to federal law, dealer sales must be accompanied by an instant background check, regardless of the premises where the transaction takes place. Federal law does not allow any exceptions. If you are engaged in the business of selling firearms, then you have to fill out the federal paperwork, and then call the FBI to get permission for every sale. There is no gun show “loophole” which changes the rules.” (1)

The gun-grabbing senators are now threatening to insert their bill (S.890), banning private sales at gun shows unless all gun buyers undergo background checks, as an amendment to other bills, according to Gun Owners of America (GOA).

AGS has already claimed there was a link between terrorism and gun shows. No such link was ever demonstrated. It was all immersed in deception used to exploit the 9-11 tragedy. Americans paid no heed to this nonsense and instead rushed to buy firearms for self and family protection.

Gun owners should be concerned. As GOA declared in a press release: “Even more ominous, the McCain bill would threaten the very existence of gun shows. S. 890 would impose a five-year jail sentence on any gun show organizer if a single attendee of the show were not notified of his obligations under the Brady law. Obviously, if this bill were passed, an organization would be foolish to even sponsor a gun show.”(2)

Most disingenuously and as part of this pincer strategy of simultaneous pressure from above and below, AGS is also sponsoring misleading ads supporting the McCain-Lieberman bill and falsely alleging that “convicted felons are buying guns at gun shows” and that “220,000 officers represented by NAPO [National Association of Police Organizations] call on Congress to pass the McCain-Lieberman bill.”

AGS does not show in the ad that the 220,000 cops were not polled by the leadership of NAPO, and that the National Association of Chiefs of Police (NACOP), which does poll its members every year, has found in its polls that police overwhelmingly support the individual right to keep and bear arms. Moreover, GOA points out that “in its 1999 survey, the NACOP poll showed that a majority of police do not think that gun shows are a ‘major source for sales of illegal firearms to criminals.’ “(3)

And they are correct. A 1997 National Institute of Justice study showed that fewer than 2 percent of criminals obtain their illegally possessed firearms from gun shows.

Similarly, in the latest NACOP survey, 93 percent of police stated that any law-abiding citizen “should be able to purchase a firearm for sport or self-defense.”(4)

If Sens. McCain and Lieberman have their way, gun shows will be shut down, gun shows that for law-abiding citizens are as American as Mom and apple pie; and many of these same Americans will become criminals overnight and be sent to jail because of another misguided gun control law. These gun-grabbing senators must not get their way.

Americans must look through this smoke screen of deception and let their legislators know that they must protect their Second Amendment right, the right that secures all others!

Miguel A. Faria Jr., M.D., is Editor-in-Chief of the Medical Sentinel of the Association of American Physicians and Surgeons (AAPS) and author of Cuba in Revolution: Escape From a Lost Paradise (2002), that reveals the lessons of gun control in Cuba.

This article may be cited as: Faria MA. Gun Shows and Gun Control: McCain Is at It Again! NewsMax.com, May 21, 2002. Available from: https://haciendapublishing.com/gun-shows-and-gun-control-mccain-is-at-it-again/.