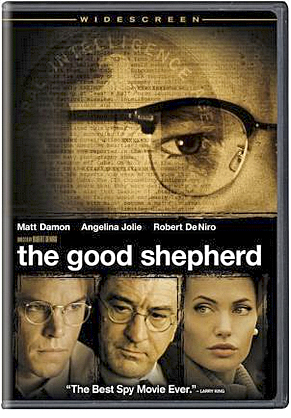 Cloak and Dagger Dullness While Bashing the CIA! — A review of the movie The Good Shepherd (2006)

On the DVD cover of the movie “The Good Shepherd,” former late night, talk show host Larry King wrote in the blurb, “The Best Spy movie ever.” He is completely wrong on this one! This film is, perhaps, one of the worst ever, but certainly not the best — not by a long shot! And this is so despite excellent performances by a great cast of actors, including Robert De Niro (Co-producer and Director) and William Hurt, two of my very favorite screen heroes.

This movie demonstrates how liberal politics in Hollywood and the entertainment industry is alive and well — Clint Eastwood and Ted Nuggent, notwithstanding.

This movie is pure fictional propaganda directed at embarrassing and discrediting the CIA, a perpetual punching bag of the liberal establishment of America. Research for this movie was nil; apparently the goal of the film was first to indoctrinate and obfuscate, while smearing a safe target, the CIA, which it probably did with gullible audiences; and second, to entertain, but at the latter it fails miserably. The movie basically has no substantial or believable plot, is boring, drags, and is way too long for its scant action and implausible intelligence intrigue. The characters are not engaging and do not evoke sympathy from their audience. All through the nearly 3 hour film an all embracing aloofness and vacuousness remain in the air, from beginning to its open ended conclusion. If a character stands out in this movie, it is the enemy, a suave KGB officer, “Ulysses,”  who tries and almost succeeds in blackmailing the main character into becoming a Soviet asset.

As far as historical reality, there is none. None of the characters resemble even vaguely the historic figures of the period and all the happenings are contrived. For example, there is not even a simulacrum of the persona of CIA Director Allen Dulles or his capable Deputy Richard Bissell, who was in charge of the Bay of Pigs plans in 1961. The main protagonist in the movie, played by Matt Damon, is a mealy mouthed, fictional character named Edward Wilson, which is a curious name to use, as there was a CIA officer who later became a CIA renegade working for Muammar Gaddafi and Libyan intelligence in the 1970s named Edwin Wilson.

The movie wreaks havoc with names and events. Confusion and distortions, involving Soviet KGB agents, defectors, and possible double agents, abound. But the fictionalized characters of the movie do not approximate any real historic figures or describe any real events. For example, a Russian in CIA custody is called Yuri Modin. When, in fact, Yuri Modin was a Soviet KGB spy master in London who was the controller of “The Cambridge Five,” British traitors from 1944 to 1955. Modin arranged the defection of Guy Burgess and Donald MacLean in 1951 to Russia. In short, the characters, I later found out were,  purportedly based on James Angleton, Raymond Rocca, Richard Helms, and Allen Dulles are unrecognizable. Anatoliy Golitsyn is turned into a falsifying identity traitor, and Yuri Nosenko, who was indeed held in harsh detention and interrogation for three years, was exonerated shortly after and lived quietly and peacefully under an assumed identity in the U.S., until until 2008, when he died at age 81. In the movie is tortured and jumps out of a window as related below.

The movie then is very cavalier about facts and identities, throwing names around and making up fictionalized events that never happened, but that an unsuspecting audience may assume them to be true. This is possible because some subplots have been crafted to vaguely resemble cloak and dagger happenings of the cold war. Take for instance the Bay of Pig fiasco, the movie makes an issue that the location of the landing may have been revealed to the Cubans by a double agent, which was in reality a moot issue. Here is another: A Soviet KGB defector is savagely beaten during interrogation and given LSD, which causes him to unceremoniously jump out of a high story window. This never happened. The CIA crushes a revolution in Latin America using biological warfare — i.e., the infestation of verdant crops with locusts sprayed from airplanes (Is this supposed to be the Arbenz affair in Guatemala in 1954? We don’t know!). But it never happened. And thus when the movie ends, it ends not with an intelligence bang but a somnolent whimper! Definitely not recommended at only 2 stars.

This article may be cited as: Faria MA. Cloak and Dagger Dullness While Bashing the CIA! — A review of the movie The Good Shepherd (2006). HaciendaPublishing.com, November 19, 2013. Available from: https://haciendapublishing.com/cloak-and-dagger-dullness-while-bashing-the-cia–a-review-of-the-movie-the-good-shepherd-2006/