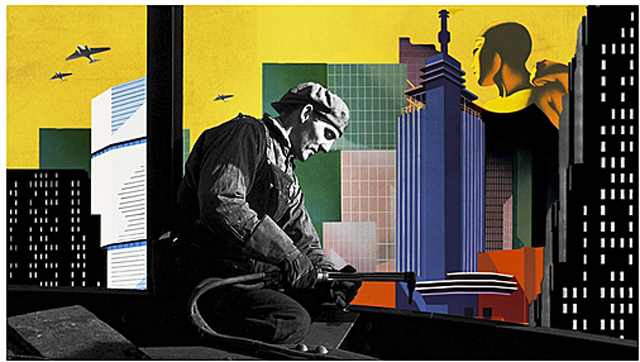 Chairman Bob and the New Socialist America by Cliff Kincaid

On his way out the door of the New York governor’s office, Andrew Cuomo gave clemency to a communist terrorist, David Gilbert. Then a California parole board voted to free the Palestinian Marxist killer of Robert F. Kennedy, Sirhan Sirhan.

On a recent trip to New York, I visited Revolution Books, which functions as a headquarters for the Revolutionary Communist Party of Bob Avakian, a one-time associate of Bill Ayers and Bernardine Dohrn. Known as “Chairman Bob,” he is the authentic Maoist. Mao’s Little Red Book is still for sale there.

A film was being shown about Avakian’s role in global communism and how his “New Communism” describes the course of current events.  He proposes a “Constitution for the New Socialist Republic in North America.”

Some people may laugh. But I am not laughing anymore.

What’s fascinating to know is that Avakian urged communists to vote for Joe Biden for president.

We are seeing in real time why this dedicated Maoist communist made this decision. These communists seemed to anticipate — or know in advance — that the puppet masters behind Biden and associated with Barack Hussein Obama would accelerate the collapse of what they call American imperialism.

“A defeat of the world’s most powerful imperialist country has big repercussions,” their latest video notes.

While they don’t endorse the “reactionary” forces of the Taliban, they nevertheless note that the Islamist victory in Afghanistan will fuel Muslim fundamentalist movements around the world and cause more conflicts in the West.

The other part of the story is that China and Russia are poised to take advantage of this conflict and disarray in the West. It’s actually an old story, reflecting active Muslim cooperation with — or subjugation by — Communist powers over the course of history.

The Chinese practice genocide against their own Muslims and will not attempt to build a “democracy” in Afghanistan. Russian President Vladimir Putin, a former KGB Lt. Colonel, demonstrated his contempt for the Muslims in his own country when he invaded Chechnya, a mainly Muslim Russian republic, in 2014.

Al-Qaeda’s Dr. Ayman Al-Zawahiri, still on the FBI’s Most Wanted Terrorist list, was trained by the KGB and is probably planning another series of biological attacks on the U.S. at this time. Meanwhile, China will pour money and resources into the country to secure vital minerals and accelerate the country’s development into a narco-state.

As all of this is happening as communist terrorists are being released from their jail cells in the U.S. Can all of this be accidental?

But there’s hope. The left-wing New York Daily News couldn’t stomach the Gilbert commutation, saying, “Andrew Cuomo’s final act as governor was to wrongly grant a proudly admitted, convicted terrorist, a man guilty of the felony murders of police officers, a likely ticket to freedom.” He now goes before the Parole Board.

Members of the Kennedy family and some liberals are objecting to Sirhan’s release.

Rep. Zoe Lofgren, a senior member of the House Judiciary Committee and the elected Chair of the California Democratic Congressional Delegation, issued a statement of her own opposing the vote by the California parole board panel recommending that Sirhan Sirhan receive parole.

She notes that parole for the assassin would still need to be approved by the full California parole board and Governor Gavin Newsom.

Sirhan Sirhan’s murder of Robert F. Kennedy was motivated by his allegiance to Palestinian nationalism and Arab socialism. He wrote in support of communism in his diary. “Long live communism,” he said.

Like his brother John F. Kennedy, Robert was an anti-communist liberal. Indeed, the Kennedy brothers, President Kennedy and his Attorney General Robert F. Kennedy, had warned Martin Luther King, Jr. against associating with communists. He ignored their warnings.

The Weather Underground, of which David Gilbert was a member, hated RFK as well.

During their time in the Weather Underground, before they became “respectable” and “mainstream” and associated with politicians like Barack Hussein Obama, Bill Ayers and Bernardine Dohrn signed a document, “Prairie Fire: The Politics of Revolutionary Anti-Imperialism,” dedicated to Sirhan Sirhan and others.

After the joint Weather Underground and Black Liberation Army assault on the Brinks truck which killed three law enforcement officers in Rockland County, New York, Weather Underground members Kathy Boudin and David Gilbert went to prison, while their “comrades,” Ayers and Dohrn, raised their child, Chesa Boudin. Dohrn was jailed for seven months for refusing to cooperate with a federal grand jury investigating the murders.

New York State Assemblyman Mike Lawler is leading a petition drive to keep Gilbert in jail. He has issued a statement asking members of the Kennedy family who oppose the release of Sirhan Sirhan to also oppose Cuomo’s decision to release cop-killer David Gilbert.

While Bill Ayers, Bernardine Dohrn, David Gilbert and Sirhan Sirhan were waging violence to take power, Chairman Bob was writing about the historical forces that he said would lead to the collapse of America. He has cult hero status on the left and is regarded as the new Karl Marx.

It would be laughable were it not so serious and if current events were not falling into place in such a way as to guarantee that a “new socialist republic” will in fact come into existence.

With the collapse of the American experiment in Afghanistan, which failed to produce a functioning democracy, the communists and the Islamists are now on the ascendency.

America is in retreat all over, leaving Israel exposed to the Red Jihad in the Middle East and Americans at home and abroad are now at the mercy of those who seek to kill us. Even our own solders are being sacrificed for the benefit of our enemies who offer “protection” as the evacuation takes place.

As part of this process, a letter to Biden from his left-wing backers calls on the United States to ensure every “properly-screened and eligible individual” currently located at Hamid Karzai International Airport (HKIA) is evacuated before the departure of U.S. forces.

But no one seriously believes all of these people will have the “appropriate paperwork and documentation” and “required visas.” One has to be a dummy to think the ranks of these refugees are not being infiltrated by Jihadists.

We should not forget that some of the 9/11 hijackers were learning how to fly planes on U.S. soil.

“Yes, we want state power,” say the Revolutionary Communists backing Chairman Bob. “We are fighting for the new society laid out in the Constitution for the New Socialist Republic in North America, authored by Bob Avakian.”

We should take them seriously. They are true believers. They know what they’re doing. They have a plan. It’s called Marxist dialectics, The Sword of Revolution.

Remember it was a West Point Cadet, Spenser Rapone, who was photographed in 2018 with the phrase “Communism will win” in his cap.

The belief in the Marxist theory of history (historical materialism) has convinced them communism will triumph by moving countries such as the United States through stages of slavery, feudalism, capitalism, and socialism. Afghanistan is stuck in feudalism.

The Soviet invasion of Afghanistan in December 1979 was a violent attempt to bring the country out of feudalism into communism. It backfired, in much the same way the U.S. failed to impose a democracy on the nation.

Chairman Bob and the Maoists understand the theory of communism better than the Russian communists did.

America’s failure gives them an opportunity to move from the highest stage of capitalism in the U.S. to socialism and even communism. That’s why Chairman Bob endorsed Biden.

Andy Zee, a follower of Bob Avakian and an advocate for the new communism, adds, “Society is being ripped apart” and that America is “two countries sharing the same border…”

As they see it, the “New Socialist Republic in North America” is inevitable. “This is a rare time when revolution becomes possible,” Avakian declares.

Larry Grathwohl, an FBI informant in the Weather Underground, said, “I remember one meeting when our Weatherman ‘collective’ brought up the subject of the Kennedy assassinations. At least 20 to 25 people were present and Bill Ayers was one of them. I heard Bill state that the murders of both John F. Kennedy and Robert F Kennedy were a good thing because liberals compromise the conflict between U.S. imperialism and the socialist revolution.  Liberals prevent the contradictions from becoming obvious and thus prevent a revolution. Therefore, the assassinations of the Kennedys were to be welcomed as a necessary advance on the road to communist world revolution.”

In the new America, communist figures like David Gilbert and Sirhan Sirhan will not only be forgiven for their crimes, they will be celebrated as heroes of the revolution.

This article may be cited as: Kincaid C. Chairman Bob and the New Socialist America. HaciendaPublishing.com, September 14, 2021. Available from: https://haciendapublishing.com/chairman-bob-and-the-new-socialist-america-by-cliff-kincaid/.