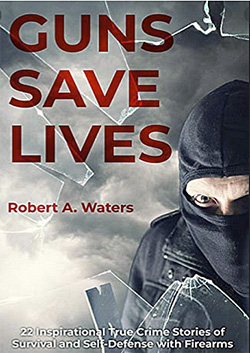 Book Review of Guns Save Lives by Robert A. Waters. Reviewed by Miguel A. Faria, MD

Once again author Robert A. Waters has performed a great service for true gun research adding to the chronicles of personal defense — and along the way, enhancing the cause of liberty. This book continues what he started in his best-seller, The Best Defense: True Stories of Intended Victims Who Defended Themselves with a Firearm (1998). In this newer tome, Waters establishes several axioms that are momentous not only in the annals of armed self-defense that he has almost single-handedly established but also in the field of criminology.

When a criminal assailant, rapist or burglar is stopped by an armed citizen — countless neighbors and even distant targets, who were not even aware they were potential victims — are saved from injuries, robberies, rapes, their lives saved and property protected, without even knowing they were beneficiaries.

In one case a serial rapist was shot and killed by a college student who he had attempted to rape in her own bed. The predator had  been terrorizing the community and had even been arrested and released several times. His death brought an end to his terrorism of young females both in the city as well as at the University of North Carolina at Charlotte. After the rapist’s death, DNA results linked the assailant to four other rapes in the area. As Waters writes, serial rapists commit at least 20 rapes or sexual assaults before being captured, which means that this intended but intrepid victim, who fought back and turned the table on her assailant, “saved more than a dozen other women from being raped or murdered.”

In another case, a mass shooter was found to possess a list of victims he intended to shoot and kill, but he was prevented from carrying out his serialization of mass murder by an armed citizen. The lives of those fellow citizens and neighbors were saved because of the person who fought back and stopped the serial killer. Those good citizens and neighbors, some who may have been hoplophobic, would never know their lives were saved because of an armed good Samaritan.

In yet another case, an armed citizen who chose to protect his home and family stopped a trio of extremely dangerous criminals, specializing in violent home invasions. These criminals had performed more than two-dozen home invasions in Little Rock, Arkansas, over the previous 6 months. With the shooting and wounding of one thug and the apprehension of the other two criminals, the attacks stopped. Again, the citizen who stopped them saved the lives and property of dozens, if not hundreds, of potential victims, who were not even aware of the beneficence conferred on them by the citizen who had refused to become a victim.

Incidentally, this same case also shows that criminals can impersonate police officers during home invasions. After kicking in the front door of the apartment, the predators yelled, “Little Rock Police Department! Hit the Floor!” Because the intended victims fought back, despite this false warning, his life and that of his wife were saved. Citizens have a right to defend themselves when home invaders enter their home. One can never be sure that these intruders aren’t impersonating cops. This case proves it. Citizens may need to protect their homes and themselves from illegal cop “no knock” raids that may result in their deaths and those of loved ones. Armed defense is also a deterrent to tyranny.

Recently, the case of EMT Breonna Taylor and her boyfriend come to mind. They were subjected to a rogue police home invasion. Thinking they were subject to a home invasion, her boyfriend defended himself and fired his gun, wounding one of the cops. Ms. Taylor was wrongly killed. The cops have now been reprimanded but Taylor’s family, with good reason, is suing. Waters dedicates Chapter 5 to “Home Intrusions,” providing a plethora of useful tips on this topic.

In another chapter, Waters describes an encounter between a disturbed, would-be ninja warrior, who attacks and wounds a pawnshop owner with a samurai sword. Our hero, the shop owner, once again wins the contest, and in the process saves countless lives that were intended to be taken by the deranged assailant. Several other cases demonstrate that concealed-carry licensed holders invariably protect property and most importantly save lives.

Criminals, particularly serial rapists, are so use to getting away with their sexual crimes of sadism and control that a phrase of amusement recurs with numerous thugs when the intended victims fight back with firearms, “Why did you shoot me, bitch?” As expected, it requires and receives no answer.

Suffice to say, the tips in this book could save your life. And if you are one of those millions of new gun owners who bought your first firearm as a result of the coronavirus pandemic or the violent George Floyd riots — when the government demonstrated its inability to protect citizens or their homes and businesses — this book is essential reading.

All of these cases keep you at the edge of your seat. Once you pick up this book, you will not be able to put it down. Treat yourself to a good book. Get this book and read it. Besides being a pleasure to read, the information provided could help you defend your home, save your life — and the lives of those you love!

This article may be cited as: Faria MA. Book Review of Guns Save Lives by Robert A. Waters. HaciendaPublishing.com, July 27, 2020. Available from: https://haciendapublishing.com/book-review-of-guns-save-lives-by-robert-a-waters-reviewed-by-miguel-a-faria-md/

1 thought on “Book Review of Guns Save Lives by Robert A. Waters. Reviewed by Miguel A. Faria, MD”