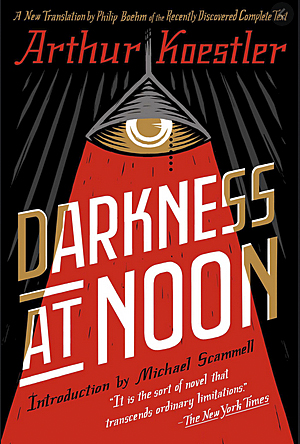 Book Review of Darkness at Noon by Arthur Koestler. Reviewed by Miguel A. Faria, MD

I went to Communism as one goes to a spring of fresh water, and I left Communism as one clambers out of a poisoned river strewn with the wreckage of flooded cities and the corpses of the drowned.
— Arthur Koestler

Darkness at Noon (1940) by Arthur Koestler is worth reading and not forgetting. It is a condemnation of collectivist authoritarianism — you may call it socialism or communism. They are nuances of the same evil political philosophy, a spectral ideology that refuses to die. The book is both a literary masterpiece and a tour de force in intellectual historical drama; it is as eloquent, given its subject matter, it’s more intense than Aleksandr Solzhenitsyn’s One Day in the Life of Ivan Denisovich. Both dramas are fast moving and intensely emotive. But whereas in Solzhenitsyn’s little epic we are dealing within injustice, imprisonment, useless labor, and hopelessness, in the case of Koestler’s Darkness at Noon, we are dealing with the more immediate arrest and incarceration of a former apparatchik, a former Bolshevik whose hands are not completely clean and who had participated in bringing about the state of persecution and terror in which he finds himself now as a victim.

Now that the millennials are rejecting capitalism and embracing socialism, thinking it is more moral than free enterprise and a more compassionate philosophy than capitalism, the story needs to be re-told. The fact that it’s a fictionalized story, Darkness at Noon by Arthur Koestler, perhaps might do for this Millennial generation, what 1984 by George Orwell did for the Greatest Generation and continues to do: Warn about evil seduction of collectivism and authoritarianism.

The personal significance and historical context of this masterpiece is inextricably entwined with the life and career of its author, Arthur Koestler (1905-1983). Koestler was a Hungarian ethnic Jew, a journalist and a former member of the German Communist Party. Koestler became disillusioned during Stalin’s purges when many of his communist friends and comrades, many of them Jews, were executed as enemies of the State. Koestler knew these men were loyal Party members, devoted communists, not traitors, even as they were made to confess imaginary political crimes. Many of them even had rationalized Stalin’s crimes in the interest of the Party and ideology. Koestler had participated in the Spanish Civil War, was arrested in 1937 by Franco’s forces, and condemned to death. Unlike his comrades who had been recalled to Moscow and executed, Koestler was imprisoned for four months and then released. It was during those months of confinement and introspection that he came to reject communism and wrote his book. He ended up in exile in England, where he wrote a number of articles and books denouncing totalitarianism and communism. He gained fame as a great writer, traveled widely espousing anti-communist political causes, and was even made a Commander of the Order of the British Empire.

The novel Darkness at Noon revolves around the arrest, incarceration, and serial interrogations of an old Bolshevik Rubashov during Stalin’s arrests and purges of the 1930s. Rubashov was sentenced to death by the Party, the same Communist Party of which he had been an intricate part. Flashbacks, reminiscences, introspection, and mental self-recriminations revolve in his mind as he is interrogated and awaits his fate. Darkness at Noon is brilliantly written and florid phrases adorn the narrative as when Rubashov, during underground activities in Belgium, recalls “the smell of the docks in the little ports, a mixture of seaweeds and petrol,” and remembers Lenin as “the old man with the Tartar eyes.”

Rubashov reminisces on the work he had done for the Party and “the Person of No 1” [Stalin]. He had served the Party and carried out distasteful pragmatic decisions. But it had not all gone well with Stalin. Rubashov had traveled to Germany to support the communist party there, had been arrested and recalled to Moscow. Since that time, he had been fortunate that although suspected, he had not been arrested upon his return. In Belgium and elsewhere, he had enforced Party discipline on other “diversionist” members; he had sent hundreds to their deaths for failure to obey Party instructions; he had even sent supplies to enemies of communism, fascist Italy and Germany, by orders of the Party “because it was expedient to the Cause.” He had obeyed and informed on those who disagreed with the Party, although he himself had thought those policies were “wrong and harmful.” In short Rubashov had sacrificed his own morality for the pragmatism and expediency of the Party.

Rubashov is supposed to be a composite of several executed Bolsheviks, and in the historical context, Lev Khamenev (1883-1936) and Grigory Zinoviev (1883-1936) immediately come to mind with superimposed echoes of Leon Trotsky in his better moments during interrogations. In fact, all in all the fictional character Rubashov behaved with more composure and courage than most of the old Bolsheviks behaved when confronted by Stalin, his secret police, and the show trials. On the other hand, Koestler’s own arrest and incarceration, inner rebellion, and rejection of communism in many ways parallels the mental odyssey and anguish of prisoner Rubashov.

Darkness at Noon has been credited with having helped to turn the political tide against collectivism in Europe and to expose the evil realities of Soviet communism to the world. I believe it did. Despite the fall of communism and the evil Soviet empire, Koestler’s masterpiece remains timeless, not only because of the historic parallels but also because of the emotive elements, the intense psychological drama as well as a literary tour de force. I highly recommend this book to historical aficionados as well as lovers of masterful literature.

Postscript. No one should be surprised that even after his death progressive academia found ways, as they did with Whittaker Chambers and other disillusioned liberals, to throw various slanderous accusations against Koestler, a man who helped shattered their messianic dreams of a coming socialist utopia. Academe and the liberal press very seldom make such distasteful imputations against their progressive icons. Instead, they have a penchant to publish luminous obituaries full of fluff listing the various progressive causes espoused by their favored notables during their frequently empty existence.

Miguel A. Faria, M.D. is an Associate Editor in Chief and World Affairs Editor of Surgical Neurology International (SNI). He is President of Haciendapublishing, a retired neurosurgeon, and the author of  Cuba in Revolution — Escape From a Lost Paradise (2002). His website is https://HaciendaPublishing.com

This article may be cited as: Faria MA. Book Review of Darkness at Noon by Arthur Koestler. Reviewed by Miguel A. Faria, MD. HaciendaPublishing.com, January 3, 2017. Available from: https://haciendapublishing.com/book-review-of-darkness-at-noon-by-arthur-koestler-reviewed-by-miguel-a-faria-md