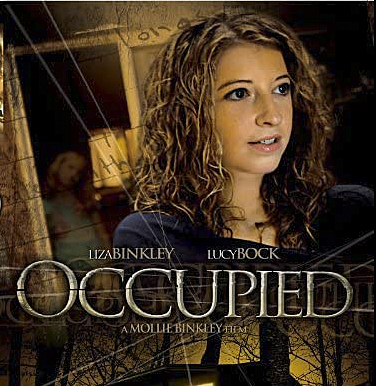 Schizophrenia in the dramatic film “Occupied” (2011) and its critics by Miguel A. Faria, MD

Before I get to the meat of this commentary, I need to provide background material to the readers. Given the descent of Hollywood movies into indecency, obscenity, vulgarity and cruelty over the last three decades, and because I don’t watch the equally tawdry television or cable programs of about that period of time, my wife indulges me by watching a variety of films and documentaries on DVDs. We have a large collection of movies (that is only exceeded by my collection of books). These films are frequently old and classic movies, but we also amuse ourselves with other genres, including horror and science fiction. A preferred genre is historic or epic films.

Those movies that turn out to be exceedingly good, such as, “Julius Caesar” (1953; with James Mason playing Brutus), “The Eagle” (2011) or “Gladiator” (2000), I review, rate, and add to the list of “Classic Movies and Documentaries” on this website. The comment section where posters can leave comments about the films becomes very active from time to time, and once or twice, we have received notes of appreciation from parents for listing those exceptional movies to choose for their children.

Our search for good movies is difficult. It seems the writers and producers compensate for the lack of good writing and originality with the use of obscenity and gratuitous sex and violence. Vocabularies are incredibly short today, and the glorification of antiheroes is the rule rather than the exception.

And so it was that in our search I came across an obscure 2011 film entitled “Occupied.” I was enthralled by the movie, a psychological thriller, and I’ve watched it two other times. My wife liked it even better the second time. The movie basically has two characters: Sarah, a 21-year-old girl who has just completed her freshman year in college, played by Liza Binkley; and her younger cousin Charlotte, played by Lucy Bock, a talkative and vivacious, sometimes irritatingly so, eleven or twelve year old, who Sarah has come to babysit for the weekend. The house is set in an isolated redwood forest in California, and it is in that isolated home and the surrounding woods that the film takes place.

Initially, the cousins get along jovially, and Sarah puts up with Charlotte’s ebullient talkative energy. But then Sarah’s behavior begins to change. Charlotte is perplexed by the transformation gradually taking place in her presence — namely, the onset of Sarah’s incipient schizophrenia. After a full psychotic episode erupts at the dinner table, Charlotte becomes frantic and scared unable to understand what was going on, not to mention the fact she was alone, helpless, and powerless to stop Sarah’s further mental breakdown.

Liza Binkley’s brilliant performance of the psychologically and rapidly decompensating Sarah could be used for teaching purposes in a mental health film. Schizophrenia, after all is a psychosis that affects over 200,000 Americans per year, often presenting itself in young adults suddenly and devastatingly so, as portrayed by Ms. Binkley.

“Occupied” was the directorial debut of writer-director Mollie Binkley, sister of the star of the film. Both the Binkley and Bock families produced the film. As a neurosurgeon with an interest in neuropsychiatry I became curious about the movie and suspected that someone in one of the families must have experienced a schizophrenic breakdown and served as a model for such a realistic and dramatic performance by Liza. And I was surprised to find little about them or the film, except that Liza had prepared well for her role. Otherwise, all I found were the derogatory comments in both IMDb and Amazon comment sections.

Suffice to say, the film was panned by audiences in the discourteous and substandard milieu of the present popular culture because the “reviewers” did not understand what was happening and did not appreciate the actresses superb performances. Instead, they expected the usual blood, gore, violence, the cheap thrills, and the special effects that now replace good script and literate dialogue.

Consider a typical comment in IMDb: “Wow! 90 minutes of nothing happening. Nothing at all. A girl goes to a secluded cabin to babysit her younger cousin. The babysitter begins to have symptoms resembling mild PMS mixed with emotions of having lost a lover. Seriously, that is it. There is more dramatic events happening in my household on a daily basis…”

And comments were not that much better on Amazon: “This movie has almost no redeeming qualities. The only one I can think of is that it was a really good original concept — but there are just so many missed opportunities to make it more interesting, and so much bad acting…. it honestly watches like some film major’s sophomore year project. It’s just bad.”

Another viewer was not sure if the film was about depression or the paranormal. Social scientists have noted the short attention span of audiences today. These “reviews” appear to verify that. But has the level of public education and the much-touted critical thinking it claims to inculcate, sunk so low that self-appointed film inquisitors cannot recognize the tragic onset of a serious psychosis and make those shallow but condemnatory remarks?

So, it is because of these derogatory reviews that I write this contrarian note, which in turn criticizes the state of the popular culture, as reflected by the movie audiences, those self-appointed critics who panned this film because of their own ignorance, not only missing what went on in the film, but also in ignoring the credible and outstanding performances of the two actresses for the entire movie.

Thus, I accuse the critics of the “Occupied.” Life is surely unfair, but such criticism stemming from ignorance is unjustifiable, reflecting more adversely on the critics than on the performers. It is unpardonable that such severe unwarranted criticism of this movie may have discouraged the two young actresses and perhaps the director from further pursuing careers in cinematography.

Once upon a time, audiences recognized the art and entertainment in such movies as the comedy-drama, “One Flew Over the Cuckoo’s Nest” (1975). I too enjoyed the movie, forgiving the unrealistic portrayal of patients in a mental institution. Sure, there was action, action that was missing in “Occupied,” as an introspective psychological drama. But I wonder how “One Flew Over the Cuckoo’s Nest” movie would be judged today? And perhaps more apropos, consider the celebrated drama, “The Three Faces of Eve” (1957), a film about a patient with a multiple personality disorder. I also wonder how our modern audiences of fast-paced action and superficial artistic sense would judge this acclaimed but slow-paced drama? Certainly, there was very little action in “The Three Faces of Eve,” nevertheless both critics and general audiences recognized Joanne Woodward’s excellent performance for what it was, and Woodward deservingly won an Oscar for Best Actress. I wonder how such performance would be acclaimed today?

With this dissenting opinion, perhaps, future and more intelligent audiences will fairly judge “Occupied.” As to the two young actresses and director, I tip my hat and congratulate them for their superb performances, even if they went unrecognized, and I wish them well with the professional interests they presently pursue.

Miguel A. Faria, M.D., Associate Editor in Chief in socioeconomics, politics, medicine, and world affairs of Surgical Neurology International (SNI). He is the author of a three part series: Violence, mental illness and the brain —A Brief History of Psychosurgery” published in SNI and available at his website HaciendaPublishing.com.

This article may be cited as: Faria MA. Schizophrenia in the dramatic film “Occupied” (2011) and its critics. HaciendaPublishing.com, January 20, 2018. Available from: https://haciendapublishing.com/schizophrenia-in-the-dramatic-film-occupied-2011-and-its-critics-by-miguel-a-faria-md