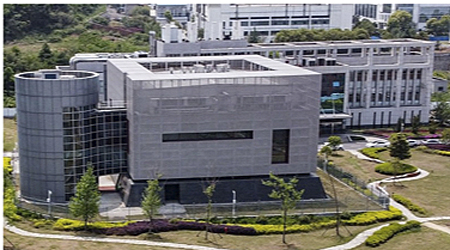 Report 1: The Real Story of the CCP Virus and True Events at the Wuhan Viral Laboratory by Russell L. Blaylock, MD

As the continuing saga of the SARS-CoV2 virus (which I call the CCP-virus for the Chinese Communist Party-Virus) unveils more information on multiple levels, we are slowing learning that Dr. Anthony Fauci, Director of the National Institutes of Allergy and Infectious Diseases (NIAID), supported by the mainstream media, played a major role in deceiving the world and especially President Trump concerning this pandemic. President Trump made the mistake of trusting medical bureaucracies, such as NIAID, the World Health Organization (WHO) and the Centers for Disease Control and Prevention (CDC), all of which are highly politicized entities and, in addition, have heavy financial interest in vaccine development and their pharmaceutical makers.

WHO Director-General Tedros Adhanom previously held the post of Minister of Health and Minister of Foreign Affairs for the Ethiopian Communist Party, one of the bloodiest communist parties in Africa. Trained as a microbiologist, Adhanom is the first non-physician to hold the post of Director-General of the corrupt World Health Organization. He has irrefutable ideological links to the communist party of China and its head, Xi Jinping.

Dr. Anthony Fauci, according to investigations by Attorney Robert Kennedy, was responsible for a gift of 3.7 million dollars to Chinese scientists at the Wuhan Virology Laboratory, the suspected source of the carefully designed SARS-CoV2 virus, which was created in its P4 level facilities for the People’s Liberation Army (PLA).

The Chinese Communist Party (CCP) leaders kept the fact that the virus had been detected in several cases of pneumonia secret from other doctors and the citizens of Wuhan. Dr. Li Wenliang treated several of the initial cases and alerted his colleagues that a suspicious virus was making its rounds through Wuhan hospitals. For his honesty, he was arrested by the PLA and made to make a false confession that he had lied. He supposedly contracted the virus after his punishment and died. I suspect the PLA may have murdered him.

Once the CCP could suppress the truth no longer, they manufactured the phony story that the virus originated in bats sold at the Huanan Seafood Market. Cao Bin, a doctor working at the Wuhan Jinyintan hospital disclosed that 13 of the 41 patients diagnosed with the infection had no connection with the seafood market. Further, no bats were sold at the market.

Epoch Times put together the first in-depth documentary concerning this whole event — a brilliant piece of journalism. Their chief journalist, Joshua Phillips, narrates the documentary. They discovered that the first notice from the Chinese communist leadership that something was amiss occurred on December 30, linking some unknown pathogen as a cause of the pneumonia cases with the seafood market. The government denied there was any danger of human-to-human transmission, even though this had been established well before the public notice.

On January 1, the CCP closed the seafood market and performed a thorough cleaning, which most likely was an effort to destroy any evidence from being disclosed in the future. The seafood market story was challenged by articles in two science publications, Science and The Lancet. By January 29, ninety-nine cases from Wuhan had been reported and 50 were known to have had no contact with the seafood market.

In an interview with the former Director of the Viral Diseases Branch of Walter Reed Hospital Army Institute of Research, it was learned that the first cases, which had not been to the seafood market, also had no contact with subsequent victims.

An interview with Judy Mikovits, PhD, a molecular biologist who was former Director of the Lab for Antiviral Mechanism, National Cancer Institute (NCI), and who had worked at Fort Detrick bioweapons lab, stated that as lax as safety conditions were at Fort Detrick, she was sure safety measures were even worse at the P4 Wuhan viral lab. Others have stated similar opinions.

A commission was put together to handle information for the CCP on the outbreak and not surprisingly, the head of the group was the communist propaganda czar. General Robert Spalding, a Senior Fellow at the Hudson Institute, stated that he was in China during the SARS outbreak in 2003 and the CCP did all in its power to cover up the event then as well.

When the coronavirus outbreak first reached the United States, I watched an interview with a virologist who had examined the gene sequence of the CCP-virus. He concluded that there was no doubt that the virus was purposefully engineered and that it contained component genes from SARS as well as the HIV virus. I never heard a reference to the human immunodeficiency virus (HIV) virus gene sequence again until I watched the Epoch TImes film, which provides a great deal more information.

The evidence indicates that two major components were spliced together to engineer this virus, one from a highly transmissible virus of low virulence and another containing four gene segments from HIV viruses. The outer coat was engineered so as to contain spike proteins (S-proteins) that give it the corona name (like the sun’s corona). These spike proteins interact in a lock and key fashion with the angiotensin converting enzyme (ACE2) receptor on human lung cells.

Virologist Dr. Mikovits stated that the S-protein allows the Severe Acute Respiratory Syndrome (SARS) virus to enter cells. Once inside the human cell, the HIV genes are released by gp41 protein, which when infecting lymphocytes, can suppress immunity (lymphopenia). Lymphopenia is consistently seen in severe cases of CCP-virus infection.

The lab that first disclosed the genome sequence of the CCP-virus was ordered closed by the CCP for “rectification.” On the same day, the Shanghai Public Health Clinical Center reported to the CCP the discovery and recommended preventative measures to protect the public. They received no response.

The CCP-controlled National Health Commission (NHC) then put out the notice that all existing viral samples of the CCP-virus were to be destroyed as well as all prohibiting release of all information concerning the samples, related papers and data. In addition, they were informed that no data could be released by self-media or social media — or to any media. Of course, this is how totalitarian governments operate — a vail of secrecy.

The Chinese virologist responsible for creating this bioweapon virus was Dr. Shi Zhengli, also known as the “bat woman,” because she spends a great deal of her time exploring bat caves in order to collect viral specimens. From 2011 on, her team’s main focus was in creating a virus that could cross species barriers and eventually creating a coronavirus that did not need an intermediate host. She published a number of papers in which she described this specially designed virus and received at least some sharp criticism from a French virologist Simon Wain-Hobson for designing a virus, that should it escape, could cause a deadly pandemic.

In Nature, she published an article in which she announced that her team had created a SARS-like virus that could directly infect humans and spread between humans. She also described the mechanism for transmission using the spike-protein interlocking with the ACE2 receptor. The ability of the virus was demonstrated in mice and later non-human primates.

On Feburary 3, we learn form the Epoch Times investigation, Dr. Wu Xiaohau blew the whistle on Shi Zhengli’s haphazard lab management as director of the P4 lab, which in his opinion may have led to the release of this bioweapon virus. Others also confirmed the viral leak story. Interestingly, on Feburary 7, the top weapons expert of the PLA, Chen Wei, assumed control of the P4 lab at the Wuhan Institute of Virology.

The CCP also expended no limits of effort to quash a rumor that a graduate student, Huang Yanling, was actually patient zero, and that she had died of the infection. Her photo, curriculum vitae, and thesis were all removed from the records of the institute. At this point, the Epoch Times documentary traces the link to the PLA military for control of the virology institute and the P4 lab in particular. I would urge all your readers to watch this documentary.

Unseen Ramifications of this Designed Pandemic

I call this a designed pandemic or as one person called it a “plandemic,” not based on how it all started, but on how it is being utilized by the CCP, WHO, Dr. Anthony Fauci and the Deep State to accomplish what the hard left/globalists knew they could never accomplish by a violent revolution, something recognized by Antonio Gramsci (1891-1937) many decades ago.

It may be true that the bioweapon CCP-virus accidently leaked from the P4 lab, but it is obvious that the CCP at that point utilized the leak for their plans for an attack on the West in general and the United States in particular.

Dr. Russell L. Blaylock is President of Advanced Nutritional Concepts and Theoretical Neurosciences in Jackson, Mississippi. He has written numerous path-blazing scientific papers and many books, including Excitotoxins: The Taste That Kills (1994), Bioterrorism: How You Can Survive (2001), Health and Nutrition Secrets (2002), and Natural Strategies for Cancer Patients (2003). He is Associate Editor-in-Chief, Neuroinflammatory Section, and Consulting Editor in Basic Neuroscience for Surgical Neurology International (SNI).

This article may be cited as: Blaylock RL. Report: The Real Story of the CCP Virus and True Events at the Wuhan Viral Laboratory. HaciendaPublishing.com. April 20, 2020. Available from: https://haciendapublishing.com/report-1-the-real-story-of-the-ccp-virus-and-true-events-at-the-wuhan-viral-laboratory-by-russell-l-blaylock-md/.

The illustrations that appear in this article were added for the enjoyment of our readers at HaciendaPublishing.com.