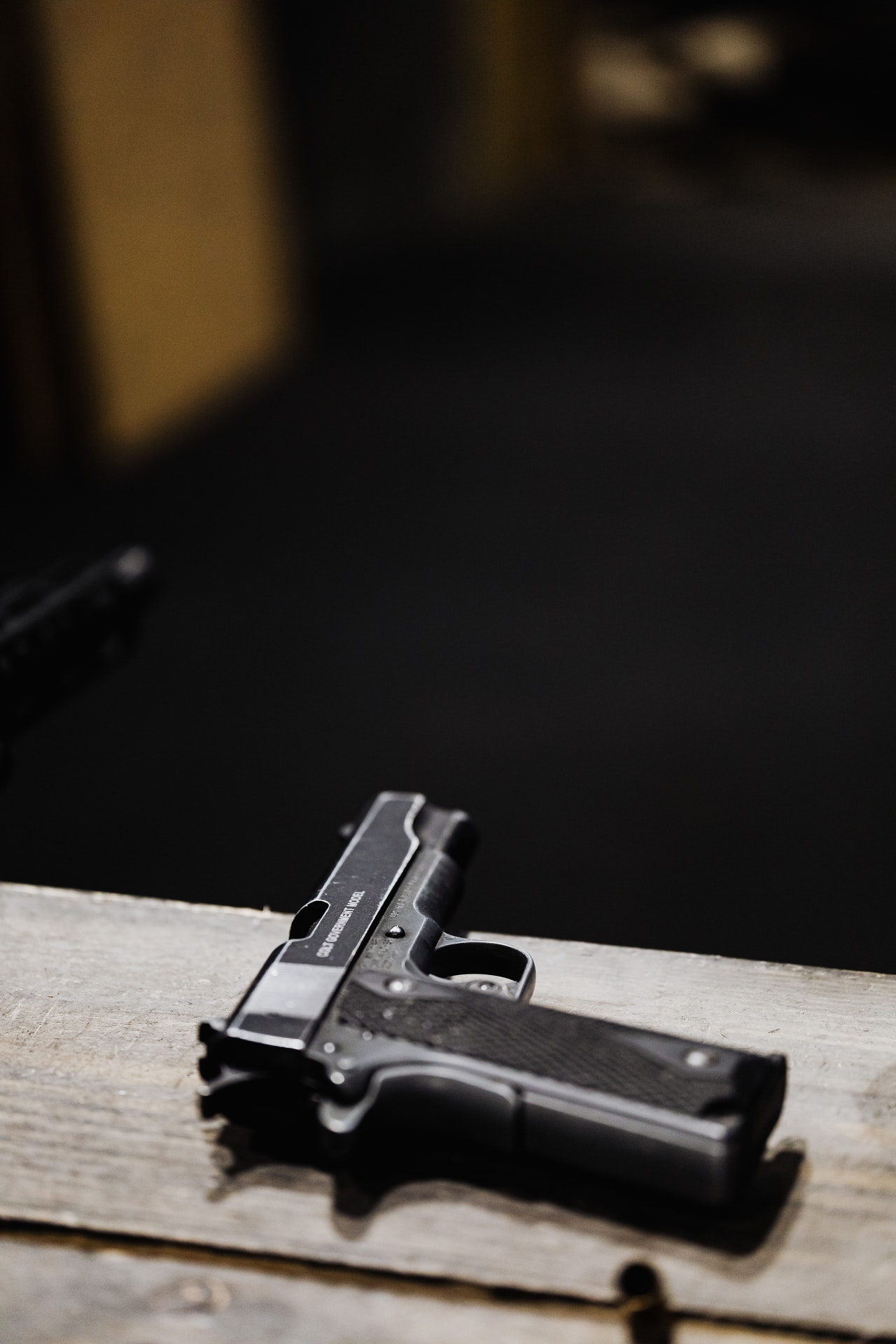 Public Health and Gun Control — No Deterrent to Crime

If the intent is to prevent mass shootings and other deadly acts, then gun control laws need to be eased not strengthened.

During the early 1970s, the PLO waged a nefarious war of terrorism against Israel that included attacking schoolchildren on playgrounds. A rampage of terrorist attacks culminated in the Maalot massacre, in which Arab terrorists, who had taken about 100 schoolchildren hostage, responded to an assault by Israeli rescue forces by blowing up explosives and firing upon their hapless victims, killing 25 people and wounding 66 others.

Following this hideous massacre, the Israeli government changed its stringent gun control policies (which it had inherited from the British Mandate) and issued personal arms and concealed carry permits to law-abiding, ordinary Israelis in the settlements.

“[After the Maalot incident] teachers and kindergarten nurses now started to carry guns. Schools were protected by parents (and often grandparents) guarding them in voluntary shifts. No school group went on a hike or a trip without armed guards. The police involved the citizens in a voluntary civil guard project Mishmar Esrachi that even had its own sniper teams. The army taught firearm safety and shooting techniques.”

This new policy had the intended effect. The PLO’s premeditated school shootings had become so costly and ineffectual that this terror tactic was abandoned by the early 1980s. This episode illustrates a lesson relevant to our own recent rash of school shootings. Namely: Allowing law-abiding citizens to carry concealed weapons can reduce terrorist attacks and save lives.

From 1994 to 1995, the Medical Association of Georgia published seminal research documenting the health and safety benefits of gun ownership. That research is extensively corroborated by the works of Dr. Gary Kleck of Florida State University and other scholars. In his momentous books, Point Blank: Guns and Violence in America (1991) and Targeting Guns (1997), Kleck reported that in the U.S. guns are used more frequently by law-abiding citizens to deter crimes than by criminals to commit crimes. Kleck found that defensive uses of firearms by citizens total two to 2.5 million times per year and that between 25 to 75 lives are saved by a gun for every life lost to a gun. Medical costs saved by guns in the hands of law-abiding citizens are 15 times greater than costs incurred by criminal uses of firearms.

More recently, Professor John R. Lott, in his book More Guns Less Crime: Understanding Crime and Gun Control Laws (1998), made readily available extensive research confirming the beneficial aspects of gun ownership by ordinary citizens in reducing crime. He also found, in his extensive analysis of data from all 3,054 U.S. counties for the period 1977-94, that state conceal-carry laws have reduced murder by 8 percent, rapes by 5 percent, aggravated assaults by 7 percent, and robberies by 3 percent.

“Conventional wisdom” notwithstanding, criminals regularly make risk-versus-benefit assessments. Empirical evidence and criminologic studies consistently reveal that the knowledge that one in five or six citizens in a public place could be armed can deter crimes and avert massacres. This has been shown to be the case in Israel, Switzerland, and even those parts of the U.S. with conceal-carry laws. In Switzerland, for example, where gun ownership is nearly universal, there was not a single report of armed robbery in Geneva in 1993!

Based on the empirical and statistical data, laws governing concealed carry permits should be liberalized, not made more restrictive. More states should extend reciprocity to each other so that law-abiding citizens may be able to protect themselves and their families when they travel outside their own states. And citizens with firearm permits should be allowed to carry their concealed guns more liberally — so that they will be able to respond effectively to criminal acts, and so criminals will not be able to assume that they will not encounter armed resistance.

Criminals are emboldened to break the law by a permissive society that absolves individuals of responsibility for their actions, and that shifts the blame to inanimate objects such as bullets and guns. According to the opinion cartel, the mere availability of guns can enable otherwise normal, law-abiding citizens to transform from “Dr. Jekylls” to “Mr. Hydes,” making nearly anyone a potential monster likely to commit a crime of passion. Fortunately, this imaginative caricature of the typical murderer is not borne out by the criminologic literature.

The fact is that the typical murderer has a prior criminal history with four felony arrests before finally committing murder. FBI statistics also reveal that 6 percent of criminals commit 75 percent of all violent crimes. One study of police records in Detroit and Kansas City revealed that, in “90 percent of domestic homicides, the police had responded at least once during the prior two years to a disturbance,” and that in over 50 percent of the cases, the police had been called five or more times to that dysfunctional domicile. Surely, these are not crimes of passion consummated impulsively in the heat of the night by ordinary citizens, but the result of violence in highly dysfunctional families in the setting of repeated alcohol or illicit drug use. Obviously, because of prior convictions, these deranged individuals capable of murder have already forfeited their right to have a conceal-carry permit issued to them.

But the media is not interested in reporting any facts that conflict with its anti-gun agenda. Consider these cases in which citizens have used guns to prevent or minimize bloodshed:

* In Pearl, Mississippi, in 1997, 16-year-old Luke Woodham used a hunting rifle to kill two students and wound seven others. Assistant Principal Joel Myrick retrieved his handgun from his automobile and held Woodham at bay until police arrived. (Later it was discovered that Woodham had also used a knife to stab his mother to death earlier that morning.) While Woodham’s shooting spree was widely reported by the media, Myrick’s armed intervention — which likely prevented additional fatalities — was widely ignored.

* In Edinboro, Pennsylvania, in 1998, another deadly incident took place when 14-year-old Andrew Wurst killed one teacher, and wounded another teacher and two classmates. Wurst’s shooting rampage was halted by merchant James Strand, who used his shotgun to force the young criminal to halt his firing, drop his gun, and surrender to police. Not surprisingly, in its coverage of the tragedy the major media gave short shrift to Strand’s armed intervention.

* In a largely unreported incident in Santa Clara, California, earlier this year, Richard Gable Stevens rented a rifle for target practice at the National Shooting Club, but instead began a shooting rampage, herding three store employees into a nearby alley and stating his intent to kill them. When Stevens became momentarily distracted, a shooting club employee, who had a .45-caliber handgun concealed under his shirt, drew his weapon and fired. Stevens was hit in the chest and critically wounded. He was then held at bay until the police arrived. A massacre in the making was prevented — but the major media were not interested.

In like manner, the prestige press shows relatively little interest in atrocities that do not involve firearms. Last May, Steven Abrams wreaked deadly havoc at a Costa Mesa, California day-care center playground, killing two toddlers and injuring five people. After his barbaric act, he then sat calmly and waited for police. Needless to say, this tragic incident did not receive the saturation coverage the Pearl, Mississippi; Edinboro, Pennsylvania; or Littleton, Colorado shootings did. The difference: The weapon used in the Costa Mesa tragedy was an automobile, not a firearm.

What Is at Stake?

Aided and abetted by the Establishment media’s anti-gun bias, the Clinton administration is proceeding with its efforts to erode our constitutionally protected right to keep and bear arms. On December 5, 1998 the administration unveiled its plan for instituting a national waiting period for all handgun transfers in addition to the national instant check system (NICS) that went into effect last year. The administration has also exploited tragic mass shootings to coerce Congress to pass more draconian gun control laws — laws that will “harmonize” the federal code with impending UN-managed global gun control.

Gun control opponents are correct when they point out that incremental increases in the regulation of the right to keep and bear arms will take us down a slippery slope to registration and eventually confiscation. This author has witnessed the tragic consequences of just such a slippery slope. As a 13-year-old boy escaping from the island prison of Communist Cuba, the tragic lesson that gun control leads to tyranny was etched indelibly in my mind. Before 1958, dictator Fulgencio Batista had all citizens register their firearms. After the sweep of the revolution, Raul and Fidel Castro had their Communist thugs, aided by the newly formed Committees for the Defense of the Revolution (CDR), go door to door and, using the registration lists of the old regime, confiscate all firearms. In the end, my Cuban brethren lost not only their guns but their freedom.

We must never permit the loss of the right to keep and bear arms in my adopted country. Never!