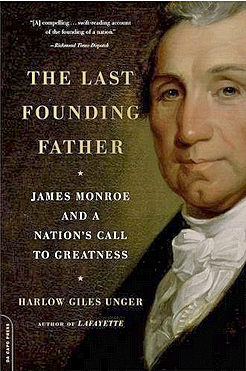 The Last Founding Father: James Monroe and a Nation’s Call to Greatness by Harlow Giles Unger (2009) is a well written and eloquently narrated book that goes a long way to accomplish what it set out to do — to make James Monroe, not only the last Founding Father, but also the greatest of the founders, second only to George Washington.

This tome then fulfills in many ways what various eminent authors have set out to do for the most illustrious of the Founding Fathers, to place them on the pedestals where they belong, but from where they have been gradually demoted by the neglect of many academic institutions of higher learning, not to mention, the public education system. I refer to the following masterful biographies: Ralph Ketcham’s  James Madison (1971); Willard Sterne Randall’s Alexander Hamilton: A Life (2003); Ron Chernow’s Alexander Hamilton (2004); David McCullough’s John Adams (2001); and the forgotten masterpiece, W.P. Creeson’s James Monroe (1946), among others. These biographies enshrine the notable careers of the founders, as men of flesh and blood, who without vacillation, pledged their lives, their fortunes, and their sacred honor for the fledging nation. This book, though, is a bit more elementary and easier to read for the initiate, less detailed, and although certainly more obsequious and idolizing of its subject than the preceding volumes, it is not slavishly to the point of detracting. Unger has certainly fallen in love with James Monroe, singing his praises far and wide, but not to the point of satiety.

Unger’s James Monroe succeeds in giving credit to the man, James Monroe: In his heroic participation in the American War of Independence under George Washington and the Marquis de Lafayette including such battles as Monmouth, Brandywine and Trenton; his trying diplomatic ministerial missions to France and England in negotiating peace with those nations under Presidents George Washington and John Adams; his accomplishing the negotiation of the Louisiana Purchase with Napoleon under President Thomas Jefferson, resulting in the doubling of the size of the United States with the acquisition of another nearly one million square miles of territory at the bargain price of 4 cents an acre (the selling price of the U.S. to settlers being $2 an acre at the time); his assumption of critical leadership during the War of 1812, as Secretary of State and acting Secretary of War under President James Madison; his skilled maneuvering of Spain to cede Florida to the United States, using fine diplomatic verbiage as the carrot and General Andrew Jackson as the stick as the fifth U.S. President; his Chief Executive pronouncement of the Monroe Doctrine, barring the European powers from further colonization in the Western Hemisphere; and his ushering in of a new era of peace and prosperity for the nation, which has been properly entitled, “The Era of Good Feelings,” as a  tremendously successful president. John Quincy Adams served him well as his Secretary of State.

We cannot help but to like James Monroe and place him back on his pedestal, although some of us may variously continue to give “second place” to other founders, such as Jefferson, Hamilton or Madison.

I recommend this book to all readers interested in American history and/or well-researched and written biographies of great Americans of ages past.

The photographs used to illustrate this book review for Hacienda Publishing came from a variety of sources and do not appear in Unger’s The Last Founding Father.