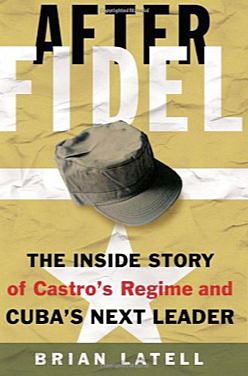 In his book, After Fidel: The Inside Story of Castro’s Regime and Cuba’s Next Leader, author Brian Latell, a National Intelligence Officer (1990-1994) and the top analyst for Cuba and Latin America for all the U.S intelligence agencies, describes in persuasive detail the personal relationship between Fidel and Raúl Castro. At the time this book was written, Raúl Castro was the anointed successor to the Maximum Leader. (He would assume power in 2006.) After Fidel contains dramatic revelations about the Castro brothers, even for those familiar with the history of the Cuban Revolution and the many biographies of Fidel Castro. I suspect that many authorities, who thought they knew the brothers intimately, will still find pearls of wisdom and psychological insights in this book explaining the various aspects in the lives and times of the brothers, even motives, which, heretofore, had been unexplainable. This insightful information comes from interviews with many former comrade-in-arms, who were personally close to the Castro brothers, also friends and family members, as well as previously published material, which the author has weaved together in a masterful interconnected analysis.

The most important points made in the After Fidel relevant to the history and future of Cuba are the following:

1) In April 1959, Raúl Castro needlessly feared that Fidel would deviate from the path of communism, while glowing in the spotlight of a very successful U.S. tour. Raúl confronted his older brother in Houston, Texas, and for the first time the two brothers argued about Fidel’s jovial and troubling attitude during the tour and Cuba’s future relationship with the U.S. As it turned out, there was no real disagreement, only a misunderstanding, and Raúl had nothing to fear. Even though Fidel was basking in the limelight of his apparent popularity in the U.S. in early 1959, he was not deviating from the authoritarian, communist understanding that had been traced by the brothers for Cuba. Fidel intended to follow the path of absolute power using the accommodating doctrine of Marxism-Leninism. And the brothers soon learned to complement each other in their repressive rule of the island: Fidel Castro was the impulsive, charismatic personality and orator; Raúl, the loyal defense minister and competent administrator who got things done.

2) For me (and probably most Cubans, who were not privy to the very personal and little known early life of the Castro brothers), the most astounding revelations were the specific and very humiliating details of Fidel and Raúl Castro’s upbringing in rural Biran in Oriente province as illegitimate children of their Spaniard father, Angel Castro, and Cuban mother and maid, Lina Ruz. Some of this information first became public in 1987 when Fidel finally talked openly about this to the Brazilian Marxist and liberation theology priest, Frei Betto. Fidel told Betto he considered himself “a victim of exploitation” in his childhood. More revelations about the dysfunctional family were disclosed to the French journalist Serge Raffy in 2004. “Fidel’s illegitimacy was profoundly traumatic for him as a young boy,” and it influenced his outlook and contributed to his bellicosity and resentful personality as an adult, and then as leader of the Cuban Revolution.

Reading about the early life of Fidel Castro provides one explanation as to what motivated him to acquire power at any price and destroy the traditional society that had humiliated him as child. Fidel and his illegitimate siblings lived in a shack, not in the main house in his father’s rustic but large hacienda with his primary legitimate family. Later, Fidel and the two older siblings, Angela and Ramón, were shunted off to Santiago, Cuba, where they lived in the home of an impoverished Haitian foster family. Fidel felt abandoned by his mother and father. And it was the Haitian who became Fidel’s godfather — not Fidel Pino, Angel’s powerful friend after whom Castro had been named. Fidel spent 2 1/2 years at this home, and he felt shame and humiliation. Later at La Salle school, Fidel was taunted as a guajiro (uncouth peasant) and lack of baptism due to his illegitimacy.

As for the younger and admiring brother, Fidel would mold Raúl’s attitude and personality to fit his will, so that Raúl would do his bidding, just as Fidel did with thousands of his followers and millions of his countrymen. Latell consulted many useful sources, including Fidel’s daughter, Alina Fernandez, and his sister, Juanita Castro, as well as the magnificent biography of Castro by Robert Quirk (Fidel Castro; 1993), in order to compose this veritable intelligence profile of the Castro brothers.

3) The book also catalogs the savagery of the Castro brothers and the criminality of Fidel Castro from his student days in Havana to the persecution of real or perceived personal enemies over his half-century in power. Besides two described assassinations, two other specific incidents are noteworthy. The first occurred in 1948, when, as a university student, Fidel wanted to use the occasion of a student meeting with Cuban President Grau San Martin to throw the president from a balcony and seize power. The other students, more morally attuned, refused! The second occasion was the public funeral of the politician Eduardo Chibas in 1951, when Fidel wanted to re-direct the funeral procession and incite the crowds to create an uprising. Why? You guessed it, to seize power!

4) Latell documents it was Fidel Castro who had always been the big puppet master. We have always been told that Raúl was the first to openly declare himself a communist, and that Fidel became a Marxist-Leninist later. But in fact it was Fidel who led Raúl down the path to communism and the Soviet alliance as described in this book. Thus, Fidel was able to characteristically remain independent with the ability to act as he saw fit and to orchestrate and manipulate events from a safe distance, the ultimate puppet master. Fidel had probably became a communist in 1948, as he confessed to the priest Betto, about the time of the infamous Bogotazo riot, which, incidentally, he impulsively joined while participating in the international student meeting then held in Bogota, Colombia. Nevertheless, Fidel continued to camouflage his communist political philosophy, which meshed perfectly with his anti-Americanism and totalitarian thirst for power, until he was firmly in power. This is the same conclusion I had reached in my book, Cuba in Revolution: Escape From a Lost Paradise (2002).

Fidel also directed Raúl to lead sanguinary affairs, even the execution of former friends and comrades as alleged traitors! Raúl took to the bottle but did as Fidel directed! This happened in 1989 with the elimination of scapegoats in high places, including, Antonio de la Guardia, a Colonel in the Ministry of the Interior (secret police), and General Arnaldo Ochoa, a Hero of the Revolution, who was also arrested, tried in a kangaroo court, and promptly executed via firing squad. Minister of the Interior Jose Abrantes also arrested, perished in his cell “accidentally.” By purging the security organs at the top in swift Stalinist fashion, Fidel eliminated any chance of political opposition and the possibility of liberalization in Cuba in the wake of glasnost and perestroika in the USSR. Fidel’s operating style, Latell writes, “often provokes one crisis with the intention of justifying extreme actions for political purposes.”

As a reward for Raúl’s complicity in the purging of his friends, including the execution of Ochoa, who had been a close personal friend and greatly admired in the Cuban military, the younger Castro was allowed to reconstitute and man Cuba’s intelligence service and security organs with his own followers. To head the Interior Ministry Raúl chose his loyal henchman, the three-star general, Abelardo Colomé Ibarra. Raúl had controlled the Defense Ministry; he now also assumed control of the Interior Ministry — i.e., the two most powerful posts in the Cuban repressive machinery of government. Raúl then became the provisional head of state in 2006 following Fidel’s debilitating illness, and assumed power formally in 2011.

5) Finally, as intimated in the preceding paragraph, After Fidel also describes Raúl Castro as the successor to Fidel Castro, depicts his style of rule as more pragmatic than charismatic, and his steady consolidation of power, beginning with the military and ending with the security organs, the latter the personal turf of Fidel Castro. Latell predicted correctly that Raúl would continue Fidel’s political line as long as Fidel is alive. Raúl remains the head of state and government of Cuba, and little has changed in terms of substantial reforms for Cuba. I highly recommend this book because of the elaboration of the intriguing points I have described, as well as an insightful introductory biography of Raúl Castro.

For those interested in reading about Cuban espionage against the U.S. and the evidence for Fidel Castro’s knowledge about the assassination of JFK’s, my review of Brian Latell’s excellent second book Castro’s Secrets: The CIA and Cuba’s Intelligence Machine, is also posted on this website.

Miguel A. Faria, Jr., M.D. is Clinical Professor of Surgery (Neurosurgery, ret.) and Adjunct Professor of Medical History (ret.) Mercer University School of Medicine. He is an Associate Editor in Chief and World Affairs Editor of Surgical Neurology International (SNI), and an Ex-member of the Injury Research Grant Review Committee of the Centers for Disease Control and Prevention (CDC). 2002-05; former Editor-in-chief of the Medical Sentinel (1996-2002). Author, Vandals at the Gates of Medicine (1995); Medical Warrior: Fighting Corporate Socialized Medicine (1997); and Cuba in Revolution: Escape From a Lost Paradise (2002). His website is http://www.haciendapub.com.

This article may be cited as: Faria MA. Fidel and Raúl Castro — Communist Brethren.  HaciendaPublishing.com, March 7, 2013. Available at: https://haciendapublishing.com/fidel-and-raul-castro–communist-brethren.

(After Fidel: The Inside Story of Castro’s Regime and Cuba’s Next Leader by Brian Latell, 2005; Palgrave-Macmillan; 273 pages.)

The photographs used to illustrate this exclusive book review for Hacienda Publishing came from a variety of sources and do not necessarily appear in Latell’s After Fidel.