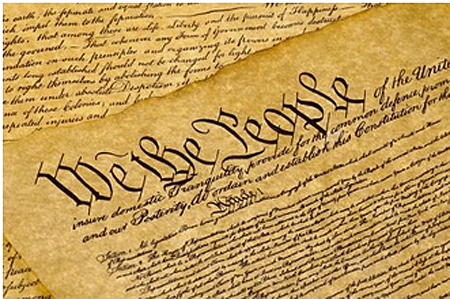 Recently, Bill Ferguson, a local columnist in The Macon Telegraph, opined it is “time to call for a new constitutional convention.” To make his points, he tells us about the public’s general dissatisfaction with the state of affairs in our nation, and then tries to scare us to death with the frightening scenarios of a government shutdown, the U.S. defaulting on the national debt, and the gridlock in Congress, so that “these once-unthinkable situations could come to pass.”(1)

No blame is placed on President Barack Obama, who is at the helm of the ship of state navigating the “unchartered waters.” But that is not all: “The stock market could collapse. Your cash and investments could become virtually worthless overnight. Government benefits like Social Security and Medicaid might be dramatically scaled back or not paid at all.” And so Mr. Ferguson writes, “I think it’s fair to say that our government is fundamentally broken at this point, and I don’t see it getting any better unless we somehow shake things up and change the status quo. But how could we do that?” His solution is to call for a constitutional convention to set things right. That idea, of course, is a very bad one.

Why? Because there is no “consensus” as to whether a convention of the states can be limited to a single or a few subjects (e.g., a balanced budget or term limit amendments). There is considerable writing expounding on this subject, and most authorities fear instead of a single or a few subjects on the table, a convention would not be limited. In fact, an all powerful constitutional convention could convene that would abrogate the entire U.S. Constitution and a new form of government created, as in fact it happened in Philadelphia in 1787.

A little history is helpful. The Founding Fathers convened a national convention in Annapolis in 1786 to discuss interstate commerce among the states under the Articles of Confederation. It was ineffective but was used as a sounding board for another convention on the same subject a year later. And instead of limiting the discussion to interstate commerce, James Madison immediately seized the opportunity to overturn the Articles of Confederation, which he thought completely inadequate for an effective federal government. Led by Madison, the founders then framed a completely new constitution, which was not what was originally intended! Thus the Convention of the States in Philadelphia became, in fact, the path blazing Constitutional Convention of 1787 that completely altered our form of government. Obviously, that was for the better at the time, given the talent, erudition and wisdom of the founders.(2)

But in today’s flagging educational establishment and the rudderless political climate, as Mr. Ferguson has himself described, imagine the outcome of a new convention! So let’s be serious. Presently, we have but few statesmen of the caliber of the founders, the intellectual giants of 1787 who framed our Constitution. Where are the principled men of firm convictions and possessed of moral compasses ready to navigate the treacherous and unchartered waters? Where are we going to find men and women of the caliber of James Madison, John Adams, George Washington, Alexander Hamilton, Gouvernor Morris, Benjamin Franklin, George Mason, Richard Henry Lee? What kind of constitution would the modern politicians draft? Our founders were well read, and they based our founding documents on historical precedents of government, the classical political philosophy of the enlightenment, and natural rights theory. Today’s politicians, urged on by the progressive academicians and the biased liberal media, would write a “living” constitution — likely authoritarian, oligarchical and collectivist, or a travesty of a “consensual” document not worth the paper it is printed on!

Mr. Ferguson writes: “We need to make the same sort of radical change. It’s time for the states that make up this union to call for another constitutional convention. I would not suggest throwing out our current Constitution as I think it is a worthy foundation to build a government on.” Frankly, I think that last statement is a red herring evincing the possibility that Ferguson wants to have it both ways. Nevertheless I will extend him the benefit of the doubt and sincerity when he says he says he doesn’t want to “throw out our current Constitution.” Mr. Ferguson continues, the U.S. Constitution “has loopholes that our representatives have exploited much to the nation’s detriment, and those loopholes need to be closed.”  He then lists three amendments he would suggest: First, a balanced budget; second, term limitation; and third, an amendment reiterating congressional power to declare war and only “when our national security is under threat or one of our allies has been attacked.” I disagree with the “loopholes” bit, but I agree with those specific proposals and particularly support Ferguson’s last limitation in his third proposal: “No more ‘nation building’ or ‘peace keeping’ exercises at a president’s discretion.” Indeed! But convening a constitutional convention is not the answer.

These three sound principles of governments proposed would have been de facto accomplished, if our progressive politicians and consensual representatives had followed and obeyed the Constitution as it stands.

First, term limits can take place at every election by simply voting the ineffectual or corrupt representatives out by an informed and vigilant electorate, prerequisites for effective self-government. Amendments may be necessary only as a last resort. The Founders presupposed the informed and vigilant citizenry would elect men of character and integrity as their chosen representatives in the U.S. House of Representatives, in the state legislatures, and as presidential electors.(3)(4)(5)

Second, as it regards a balanced budget, for example, consider Article I, Section 9, paragraph 7 of the Constitution that reads: “No money should be drawn from the Treasury, but in consequence of Appropriations made by law; and a regular statement and account of the Receipts and Expenditures of all public money shall be published from time to time.” Moreover, it is fiscally responsible and common sense that a budget should be balanced, whether specifically mandated by the Constitution or not. Thomas Jefferson opined: “To preserve our independence, we must not let our rulers load us with perpetual debt. We must make our election between economy and liberty or profusion and servitude…And the fore-horse of this frightful team is public debt. Taxation follows that, and in its train wretchedness and oppression…I predict future happiness for Americans if they can prevent the government from wasting the labors of the people under the pretense of taking care of them.”(6) And for many years the founder’s advice was followed, and the United States prospered and did not incur a persistently climbing and crushing national debt — until the federal government transcended its constitutional limitations and became a completely unrestrained leviathan with the advent of LBJ’s Great Society.

And third, as it pertains to waging war: Article I, Section 8, paragraph 11 of the Constitution already authorizes Congress “to declare war, grant letters of marque and reprisals….” Needless to say, our founders and their successors, until the 20th century, believed in the concept of just and defensive wars. Let’s return to the concept of peace, unless our national security, or that of our allies, is threatened or we are attacked. And if common sense and the existing constitutional constraints are not enough to fix the problems, the present Constitution already has a simpler mechanism in place for amendment, a process which has already been used successfully 27 times. Article V reads: “The Congress, whenever two-thirds of both Houses shall deem it necessary, should propose Amendments to this Constitution… which should be valid to all Intents and Purposes as Part of this Constitution, when ratified by three fourths of the several states.” The other method of amending the Constitution requires convening a constitutional convention, which as we have stated may not be limited to a single or a few subjects, and can therefore be a dangerous double-edged sword.

Granted, there is much insanity in Washington, but President Obama is at the helm, and much of the fiscal profligacy, economic mayhem, and irresponsible misuse of military power, as in Libya, has emanated from the White House supported mostly by his Democratic Party. Let us not tamper with the U.S. Constitution but elect legislators who will abide by the venerable document — and vote out those who don’t! There is still time to save and keep our Republic!

See my subsequent article on this topic: “Concerns remain on calls for a ‘Convention of States’ to restore the nation.”

1. Ferguson B. Time to call for a new constitutional convention. The Macon Telegraph, September 20, 2013.

2. The authoritative 753-page biography of James Madison by Ralph Ketcham (1990; University of Virginia Press) is an imposing tome, but well-worth the read for those interested in the life of the Master Builder of the U.S. Constitution, the forging of the document, and the mechanism involved in convening a constitutional convention.

Miguel A. Faria, Jr., M.D. is Clinical Professor of Surgery (Neurosurgery, ret.) and Adjunct Professor of Medical History (ret.) Mercer University School of Medicine. He is an Associate Editor in Chief and World Affairs Editor of Surgical Neurology International (SNI), and an Ex-member of the Injury Research Grant Review Committee of the Centers for Disease Control and Prevention (CDC). 2002-05; Former Editor-in-Chief of the Medical Sentinel (1996-2002). Author, Vandals at the Gates of Medicine (1995); Medical Warrior: Fighting Corporate Socialized Medicine (1997); and Cuba in Revolution: Escape From a Lost Paradise (2002). His website is https://HaciendaPublishing.com.

This article may be cited as: Faria MA. Faria: A Constitutional Convention — Not the Way to Amend the U.S. Constitution! GOPUSA.com, September 23, 2013. Available from: https://haciendapublishing.com/faria-a-constitutional-convention–not-the-way-to-amend-the-u-s-constitution.

The images used to illustrate this commentary came from a variety of sources and did not appear in the original versions published either in GOPUSA.com on September 23, 2013 or in the Macon Telegraph on October 18, 2013. They were added here for the enjoyment of our readers at HaciendaPublishing.com.