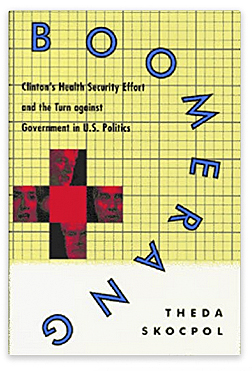 Boomerang: Health Care Reform and the Turn Against Government by Theda Skocpol

Boomerang by Theda Skocpol, a professor of government and sociology at Harvard University, is subtitled, “Clinton’s Health Security Effort and the Turn Against Government in U.S. Politics.” And indeed, this book is about politics, not about the reality of what went on in those crucial years. One comes out with the impression that the book was written to bring the author to the attention of the Clinton administration.

For example, she writes that Hillary and President Clinton had found an ideal “middle way” for health care reform, but that unfortunately, their plan was sabotaged by the conservatives in 1994 following the lead of Bill Kristol, former chief aide to Vice President Dan Quayle. She laments that the Democrats were not able to marshall their forces at a critical time to pass what she obviously considers the “good” legislation of the Health Security Act.

While she gives Bill Kristol considerable, unflattering credit, she fails to even mention the Association of American Physicians and Surgeons (AAPS), whose landmark lawsuit, AAPS v. Clinton, against the secret Health Care Task Force, derailed to a significant extent the Health Security Act of 1993. Neither AAPS nor the lawsuit appears in the text or index. The book is therefore quite incomplete. In just one chapter of his book, The Seduction of Hillary Rodham, author David Brock gives by far a more accurate portrayal.

The book is an apologia for the ill-fated Health Security Act which carried with it a significant transfer of control of health care delivery from the private sector to the government bureaucrats and an assortment of central planners in the various levels of the bureaucracy, such as the Purchasing Cooperatives, the National Health Board, HHS, and numerous other alphabet soup government or quasi-government agencies that were to be established. The American people were correct in rejecting socialized medicine and the Clinton plan.