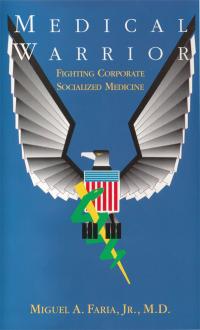 Warning! If you have high blood pressure, consult your physician before reading Medical Warrior. Dr. Miguel Faria writes with such fervor and conviction about the looming dangers of a health-care system dominated by big government, big business, and big labor that people with medical problems may wish to read something far less provocative.

In this collection of his published essays, Faria offers us a depressing look at the continuing statist re-invention of our health-care system. Readers are introduced to an impending health-care dictatorship the author describes as “corporate socialism,” dominated by federal regulations and financed by billions of taxpayer dollars, but indifferent to the desires and welfare of individual patients. It is a frightful prospect.

Faria, a neurosurgeon who left Cuba as a child, sees events with the clarity that so often comes from having lived under tyranny. He writes that the proposals for health-care “reform” are “as much a threat to the preservation of the sanctity of the doctor-patient relationship, Hippocratic medicine, and patient and physician autonomy, as socialized medicine in the form of a single-payer system. . . . In fact, the failures and shortcomings of the managed care/managed competition scheme may lead in the end directly to the…single-payer system, when the ‘free-market’ is erroneously blamed for the failure and collapse of corporatism in American medicine.”

The last of Faria’s essays in the book is dated July 1995, but events have validated his concerns. Beginning in 1996, with the formation of the National Health Policy Board, government intervention in medical care has proceeded apace. We have seen enactment of guaranteed issue of health insurance, price controls in the form of community rating, new unfunded health-care mandates, patient-access laws, Medicare changes that compromise seniors’ freedom to buy health insurance that they desire, Medicaid changes that force citizens out of fee-for-service and into restrictive managed care, and a $40 billion federal program for children’s health care. Faria (and others) warned against taking this path, but the political urge to devise highly publicized “solutions” to health-care problems that are the result of previous interventions is just too powerful. More are waiting in the wings.

Faria has not only stood against the trend toward socialized medicine but also against the medical profession’s moves into peripheral social issues-for example, gun control. The American Medical Association has advocated restrictive legislation as part of its campaign against domestic violence. In the Journal of the Medical Association of Georgia, which he used to edit, Faria wrote that gun control was an attack on individual liberty that would do nothing to reduce violence. That temerity got him fired from the journal. His chapter “Editorial Lynching in the Deep South” recounts his battles with the Medical Association of Georgia and the Atlanta Journal-Constitution.

Perhaps the greatest virtue of this book is that it reminds us of the past failings of socialistic meddling with the medical marketplace and the futility of trying more of the same. If bleeding a patient of an ounce of blood just made him weaker, it was folly to believe that bleeding him of a pint would make him better. But that is similar to what the advocates of government intervention in health care have been doing: prescribing more of the same harmful treatment. As Faria forcefully argues, freedom for patients and practitioners is the cure for the manifold illnesses of our system.

For me, the biggest problem with Medical Warrior is its obscurity. My research of the worldwide library database revealed only 17 copies in more than 25,000 public libraries, and the book has had little or no exposure at the major retailers. Nevertheless, it makes an important contribution to the literature documenting the demise of what was once the world’s greatest health-care system.

Conrad F. Meier is health policy adviser for The Heartland Institute and assistant in research at the Center for Advanced Social Research at the University of Missouri-Columbia.

This book review was originally published in The Freeman—Ideas on Liberty, December 1, 1998.