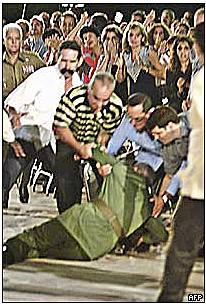 An Old Dictator Stumbles — An Analysis

Seventy-eight-year-old Cuban dictator Fidel Castro, dressed in his usual olive green fatigues, tripped and fell fracturing his left knee and sustaining a hairline fracture of the upper right arm Wednesday, October 20, 2004. He had just finished giving a speech at a graduation ceremony in Santa Clara when the incident happened.

Security personnel rushed to his rescue to help him up. Shortly after, Fidel spoke briefly and stated that he was still “all in one piece.” Sweating profusely, he added that he will do all that he could to get well soon, “but as you can see I can still talk.”

Three years ago he fainted after having given a long speech under the hot sun. At his age, it may be that these episodes are the secondary manifestations of more serious conditions such as advanced cerebral arteriosclerosis and insufficient cerebral circulation, presenting clinically as a condition medically referred to as transient ischemic attacks (TIAs). If this is the case, you can be sure that the medical condition of the Maximum Leader will remains a closely guarded secret.

If hardening of his arteries and associated formation of cholesterol plaques (cerebral arteriosclerosis) is suspected, and his increasingly erratic behavior suggests that this is the case, his physicians likely have already performed laboratory tests and radiological examinations, such as a cerebral MRI (Magnetic Resonance Imaging) and vascular studies to determine the status of his brain circulation. That information is not available.

Perhaps more importantly, these dramatic stumbles should remind the Dictator and the regime of the Maximum Leader’s mortality, but may or may not presage his imminent physical and/or political downfall. He has proved himself a resourceful feline that always seems to fall on his political paws and more than nine lives to spare. Like Mark Twain, the news of his impending demise has been greatly exaggerated: A charge to which this author may himself be guilty! (See my 2002 book, Cuba in Revolution: Escape from a Lost Paradise, chapter 26.)

The old dictator stumbled once more, but he should recover. The tragedy remains that after forty-five years of his iron rule, more than eleven million Cubans remain living in a Stalinist past in an Orwellian future — with their faces and their lives trampled under his boots of tyranny.

Dr. Faria is editor emeritus of the Journal of American Physicians and Surgeons (formerly, Medical Sentinel). Clinical Professor of Surgery (Neurosurgery, ret.) and Adjunct Professor of Medical History (ret.), Mercer University of Medicine Author, Cuba in Revolution: Escape from a Lost Paradise(2002). His books and other writings are available from his website: HaciendaPublishing.com.

This article may be cited as: Faria MA. An Old Dictator Stumbles — An Analysis. LaNuevaCuba.com, October 24, 2004. Available from: https://haciendapublishing.com/an-old-dictator-stumbles–an-analysis/.