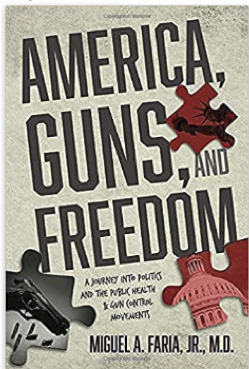 “[U]tilitarian ethics refers to the judgment of a course of action being good (right) or bad (wrong) based on societal consequences, such as cost, and not necessarily on benefits to the individual,” Miguel A. Faria, Jr., M.D. writes in America, Guns, and Freedom, an exhaustive study on the Second Amendment and its perversion for political purposes by the medical establishment.

“Physicians have been trained from time immemorial to place the interest of the patient first, rather than society, and never do harm to the patient deliberately under any circumstances.”

Ignoring that is exactly what those exploiting their medical credentials to create the illusion of qualifications in all their pronouncements have been doing. And Faria is just the guy to not only point that out but to tell us how they do it and how to counter the lies. He has also been one of the authorities, in the truest sense of the word, whose evidence-based arguments have been most influential in guiding my understanding of politicized medical establishment malpractice. I’d initially run across (and began citing) his landmark “The Perversion of Science and Medicine (Part III): Public Health and Gun Control Research” years ago, and began learning more about his prolific works and the remarkable mind behind them.

Faria was one of the figures whose testimony before Congress was instrumental in the passage of the Dickey Amendment, precluding the Centers for Disease Control from advocating for “gun control” (not from all research, as citizen disarmament proponents who demand taxpayer-subsidized junk “agenda science” would have us believe).

By way of his own qualifications, Faria “is a retired neurosurgeon and neuroscientist, medical editor and author, medical historian and medical ethicist, public health critic and advocate for the Second Amendment to the U.S. Constitution.” His Curriculum Vitae-documented credentials and professional achievements will take longer to read than this book review.

Faria’s experience with freedom is firsthand. His parents were Cuban underground freedom revolutionaries, and at 13, he escaped with his father from the communist Castro regime. He wrote about that and more in Cuba in Revolution: Escape from a Lost Paradise. He has also established himself, along with all his other achievements, as a published authority on communism and totalitarianism, and further, is the author of Medical Warrior: Fighting Corporate Socialized Medicine, and Vandals at the Gates of Medicine: Historic Perspectives on the Battle over Health Care Reform.

Back to the book at hand, it’s almost impractical to write a synopsis, the ground it covers is so varied and wide. In it we learn how “the public health establishment threw science into the wastebasket, confusing microbiology and pathology with sociology and politics.” Faria shows us how the corrupt “public health model” of “gun violence” is really social engineering, not science, how to spot and debunk fraudulent “studies,” and how the American Medical Association has discarded the scientific method to instead push partisan politics.

I have to put an aside in here because I don’t want anybody getting the impression that this is all going to be specialized and dry to the point where their eyes glaze over. It’s interesting every step of the way to those with inquiring minds who value knowledge and learning. I confess I even laughed out loud—whether Dr. Faria intended me to or not—when he was discussing researchers depending on government funding having their credibility and professional reputations questioned for their part in such manipulation, and added parenthetically:

“(I would also say honor, but the term is considered anachronistic and antiquated in such quarters.)”

That and another term he uses several times, “moral courage,” ought to resonate with every gun owner who defends the right to keep and bear arms. An extensive index, bibliography and references notwithstanding, this is not a book for eggheads (although it should be as well)—it is primarily for seekers and defenders of the truth.

Thus Faria departs from showing the gun quacks for what they are to showing us the relevance of “The Second Amendment in Modern Society,” then looks at “Tyranny and the European Social Democracies,” assesses “Mass Shootings and the Media,” and ends up exploring his title thesis, including a truism some of us have been advocating for years:

“Offense is the best defense for advocating gun rights.”

I encourage you to get a copy of America, Guns, and Freedom for yourself. I also encourage you to learn more about Dr. Faria’s work at Doctors for Responsible Gun Ownership, and from his AmmoLand interview by John Crump. It’s critical that we who have a vested interest in spreading the truth share this information with fellow gun owners because, as Dr. Faria recently informed his Facebook followers:

“My book is no longer No 1 release in either public health or public policy. Instead, David Hemenway’s pro-gun control book is touted by the liberal media and promoted by Amazon…”

As long as you’ve read down this far and I presumably still have your attention, there’s one more thing I encourage you to do that will cost you nothing except a couple of minutes of your time at most: Contact your local library. Find out if they carry America, Guns, and Freedom. If not, find out who you have to talk to in order to make that happen.

If I had to sum up my review in one sentence it would be:

This is essential information for everyone who considers himself (or would like to be) an informed defender of the right to keep and bear arms.

That said, America, Guns, and Freedom is available in hardcover or by Kindle from Amazon.

Get it. Make no mistake; you’ll be doing it for yourself. And tell your friends. And hey, Christmas is coming up…

David Codrea is the winner of multiple journalist awards for investigating/defending the RKBA and a long-time gun owner rights advocate who defiantly challenges the folly of citizen disarmament. He blogs at “The War on Guns: Notes from the Resistance,” is a regularly featured contributor to Firearms News, and posts on Twitter: @dcodrea and Facebook.

This book review was originally published on Ammoland.com on October 28, 2019. It is reposted here for the enjoyment of our readers at HaciendaPublishing.com.