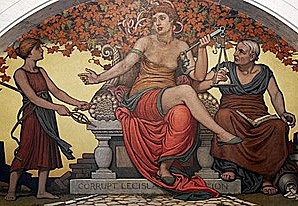 A Battle Against Lies by Cliff Kincaid

The Christian existentialist philosopher, Soren Kierkegaard, wrote about the corruption in the Danish State Church, declaring that everyone knew privately that the system was rotten and corrupt but they would not say so publicly. “Just as one says that death has marked a man, so we recognize the symptoms which demand to be attacked. It is a battle against lies,” he said.

The problem we face today is corruption in government, the media, and the church that runs so deep that it is uncomfortable for some to even talk about it publicly.

In his landmark 1975 book, The Corrupt Society, Robert Payne wrote, “There are many weapons that can be used to prevent the corruption of societies. The most powerful of these weapons are vigilance and knowledge. Hence the importance of the press, radio, and television to break through all imposed restrictions to discover how the government works, how it arrives at its decisions, how it manages its defenses, how it deals with traitors, especially the traitors in its midst.”

The tragedy is that, since Payne’s book was published, the press has become as corrupt as government. I actually noticed this trend when I went to college and studied a textbook, Interpretative Reporting, by Curtis MacDougall, a communist fellow-traveler who admired Castro and hated anti-communist Senator Joe McCarthy. That’s one reason why I went to work out of college monitoring the media for Accuracy in Media.

My friend and former colleague at Accuracy in Media, Roger Aronoff, discussed the corruption in the media in a recent edition of my show America’s Survival TV.

Payne dedicated his book to Richard Nixon, a joke because Payne found Nixon and his administration to be corrupt. It was also a joke because Victor Lasky’s book, It Didn’t Start With Watergate, proved that Democrats were as corrupt, even more so, than Republicans.

As we look deeper, we discover that Nixon was singled out for destruction because of his role in helping to expose Soviet spy Alger Hiss in the State Department, and a communist network inside the U.S. government. Ironically, Nixon had persuaded anti-communist Senator Joe McCarthy to avoid investigating communist penetration of one key agency — the CIA. McCarthy would go into Bethesda Naval Hospital with a sore knee and leave in a body bag, allegedly dead of hepatitis, before he could ever launch that inquiry. McCarthy’s strange death was examined in the J.C. Hawkins book, Betrayal At Bethesda.

Many liberals, even to this day, think Hiss was innocent or that the evidence against him is still in dispute. They also despise McCarthy for his investigations of communists in government. Liberal disgust for McCarthy has been adopted by such Never-Trump notables as Jonah Goldberg. Author J.C. Hawkins discussed Goldberg’s strange views during a recent episode of America’s Survival TV.

Goldberg is one of those “responsible conservatives,” in this case someone who achieved prominence because of his mother’s role in the Monica Lewinsky/Bill Clinton scandal, who warns against investigations of what is truly happening behind-the-scenes politically.

Trump’s Attorney General Bill Barr is another so-called “responsible conservative” who refused to do what is necessary to expose the Deep State, of which he is clearly a member. His service to the CIA continues.

We should remember that Nixon had won the 1960 election against John F. Kennedy but had that election stolen from him. He was persuaded to avoid contesting the election in the name of national stability. Subsequently, he was elected president in 1968 and re-elected in 1972.

The accepted history is that that Watergate was a White House dirty tricks operation designed to gather dirt on Democratic Party officials by breaking into their offices in the Watergate hotel. In fact, the evidence shows it was a CIA operation, something suspected by “Deep Throat,” the major source for the Washington Post’s Bob Woodward and Carl Bernstein, who turned out to be the FBI’s number two, Mark Felt. The CIA was investigating a high-class prostitution ring that was used by the Democrats and coordinated from their Watergate offices to “entertain” Democrat VIPs. Woodward and Bernstein failed to pursue that line of inquiry.

All of this is now on the public record thanks to John O’Connor’s book, Postgate. I recently interviewed him on America’s Survival TV. What the CIA was doing was later copied by one Jeffrey Epstein, an individual with intelligence connections whose death remains as mysterious as the politicians he videotaped and blackmailed. It was another scandal that Bill Barr failed to uncover.

Again, as we see possible parallels between the fates of Nixon and Trump, Postgate author John O’Conner and others are being featured in the film, “Plot Against the President,” about how the intelligence community targeted Trump in much the same way they brought down Nixon.

Interestingly, Washington Post Watergate reporter Carl Bernstein’s parents were members of the Communist Party. His father had been questioned about a possible relationship with Louise Bransten, a member of a Soviet espionage network.

For his part, Post executive editor Ben Bradlee’s wife was the Post’s longtime religion reporter and Washington insider, elite party planner Sally Quinn, who admitted in her book Finding Magic to her belief in the occult, including casting spells on her enemies, reading Tarot cards, and using Ouija Boards. It seems like she was into something akin to the “spirit cooking” dinners mentioned in the Hillary Clinton emails.

Years, earlier, Jean Houston of the Foundation for Mind Research would try to help Mrs. Clinton, then First Lady, “communicate” with Eleanor Roosevelt during a mystical “channeling” session.  Washington Post reporter Bob Woodward wrote about these sessions in a book on the 1996 presidential election but he didn’t seem to find anything unusually strange or bizarre about such practices.

Nixon’s resignation was so destabilizing that it led to the communist takeover of Vietnam, with 58,000 Americans having died in vain, and the communist genocide in neighboring Cambodia, costing 2 million lives.

Bringing all of this up to date, we learn that House Speaker Rep. Nancy Pelosi once praised Dr. Carlton Goodlett as a civil rights activist. A communist associate of the Peoples Temple cult leader Jim Jones, whose more than 900 followers committed “revolutionary suicide” in Guyana in 1978, Goodlett was a Lenin Peace Prize winner and central figure in the Democratic Party in San Francisco. Incredibly, there is a street in San Francisco, Dr. Carlton B Goodlett Place, named after this communist, where City Hall is located.

FBI documents obtained through a Freedom of Information Act request reveal the Soviet communist connections of Carlton Goodlett and his political influence in San Francisco.

The clever change in communist strategy has been to blame the Russians while the Chinese Communists, their partners in crime, take the lead as the “fundamental transformation” of the United States and the world proceeds. Hence, one of the leading progressives, Rep. Jamie Raskin, appearing several years ago at a Trump impeachment rally, blamed the Russians for supporting Trump while his own father, Marcus Raskin, was very close to the Russians when they were officially members of the Soviet Union.

In this way, through lies and skillful deception, Bolshevik Bernie Sanders becomes a respectable “democratic socialist,” someone worthy of being brought into the Biden/Harris camp. For his part, Rep. Raskin is a prominent member of the group “Secular Democrats” that is asking that some conservative “white nationalist” Christians be investigated by a Biden/Harris Administration as potential terrorists by the FBI. Journalist Leo Hohmann broke this story and discussed it with me on ASI TV.

Don’t look for any guidance from the Vatican and Pope Francis, for they are staging a New Age Nativity scene in St. Peter’s Square that looks like an illustration from the book, God Drives a Flying Saucer.

Equally bizarre, as my family was visiting Rome last February, we took a tour of the Colosseum only to discover a statue of Moloch, the pagan deity of child sacrifice, being displayed. The Colosseum is viewed by many Christians as a sacred site because early Christians were martyred there.

For my part, the yard signs and banners, “Mary was Pro-Life,” and “Unborn Lives Matter,” still remain for visitors to my home. It’s a small thing to do. But these signs send an appropriate message at this time and may just “trigger” somebody into waking up from the lies.

This article may be cited as: Kincaid C. A Battle Against Lies. HaciendaPublishing.com, January 1, 2021. Available from: https://haciendapublishing.com/a-battle-against-lies-by-cliff-kincaid/