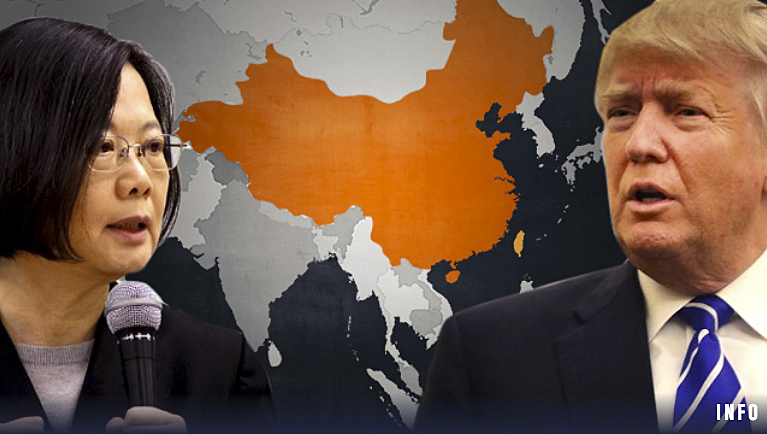 Trump, Taiwan, and China — A phone call and a change in direction?

Donald Trump spoke with Taiwan’s President Tsai-Ing-wen on December 3, triggering a thunderstorm of media clatter and protestations. Some mainstream media analysts were “aghast” at the incident. But the fact is Trump was correct to take the call from the diminutive but steely, determined, and democratically-elected Taiwanese president. The Taiwanese have lived under the threat of invasion and even nuclear attack from the communist Chinese for decades.

Mellifluous-voiced David Wright, a talking head on ABC News crowed, “it is difficult to tell if Trump’s conversation was a rookie mistake or a deliberate provocation”; while ABC News political analyst Matthew Dowd further expounded stating that either way Trump’s posture was “problematic.” The media dog and pony show on Sunday morning reminded me of the egregiously liberal bias I witnessed by ABC News commentators during election night coverage.

Most of the historic antecedents for the One China policy that the United States has observed for nearly 40 years have been ascribed to Republican President Richard Nixon. And while it is true that it was Nixon who opened up China, it was Democrat Jimmy Carter who trampled on the honor of America in 1979 by kowtowing excessively to the communist Chinese by severing diplomatic relations with Taiwan and casting the U.S. ally to the wind. It was one more submissive gesture to left-wing dictatorships and communist regimes during Carter’s administration among a long list of foreign policy failures and disasters.

At the time, Nixon’s trip to China was seen as a betrayal and very disheartening to many conservatives. However, the move was a strategic one that widened the rift between the two communist superpowers, the Soviets and the Red Chinese, and a veritable masterstroke in geopolitics in America’s best interest, a diplomatic coup that widened the Sino-Soviet Split during the cold war.

For nearly four decades we have had a One China policy, but was that policy sound? Why would a sovereign nation like the U.S. not be allowed to have mutually beneficial trade with Taiwan? Why would the U.S., the most powerful nation in the world, not be permitted to have formal and friendly diplomatic relations with Taiwan, a democratic nation that wishes nothing but to be left in peace while preserving her independence and prosperity?

The media predicted a massive, angry, and destabilizing Chinese response, already blaming Trump for his “rookie mistake” or “deliberate provocation.” Moreover, Trump had previously not minced words in lambasting China, accusing the communist nation of terrible business and trading practices and for manipulating the currency to the detriment of the United States. But the feared and expectedly trembling response by China did not materialize. The diplomatic protest — if we can even called it a protest — was a very measured response, that China called bemusingly “solemn representations” with the United States.

According to ABC News, the Chinese foreign minister informed reporters in Beijing that China urged the relevant parties in the United States to handle Taiwan-related issues “cautiously and properly” to avoid “unnecessary interference” in the China-U.S. relationship. The minister insisted, “there is only one China in the world, and Taiwan is an inseparable part of Chinese territory.”  We will have to wait and see about that.

The U.S. remains China’s largest trading partner, and China has a big economic interest in maintaining that partnership, a trade partnership that actually resulted in an American trade deficit of nearly $340 billion in 2015. Corporativist China is not about to endanger that lucrative trade and chance a military confrontation with the U.S. for an old “runaway province” of Imperial China, especially when the American President-Elect is Donald Trump, and not another kowtowing Democrat president.

Moreover, Vladimir Putin, the formidable President of Russia and a tentative geopolitical ally of China, seems to be on excellent terms with Trump. Both the Russians and the Chinese understand that Trump will not be a push over and understand the concept of American economic and military power under a strong president. They remember the presidency of Ronald Reagan and how the evil empire came tumbling down following his energetic, determined, and projected leadership.

In U.S.-China relations, I believe restraint and civility will be the order of the day!

Miguel A. Faria, M.D. is an Associate Editor in Chief and World Affairs Editor of Surgical Neurology International (SNI). He is President of Hacienda Publishing, Inc., a retired neurosurgeon, and the author of  Cuba in Revolution : Escape From a Lost Paradise (2002). His website is https://HaciendaPublishing.com

This article may be cited as: Faria MA. Trump, Taiwan, and China — A phone call and a change in direction? Haciendapublishing.com, December 4, 2016 Available from: https://haciendapublishing.com/trump-taiwan-and-china–a-phone-call-and-a-change-in-direction

This article also was published in GOPUSA.com on December 5, 2016.