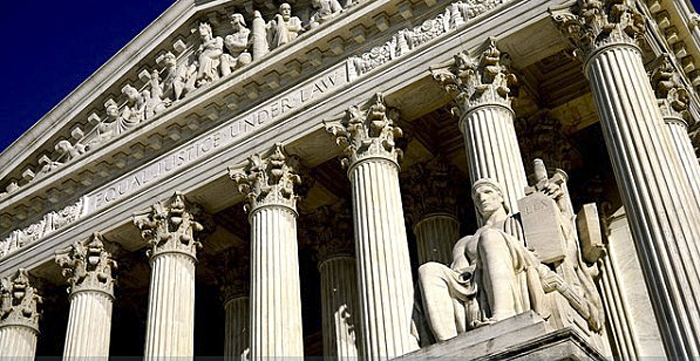 The Supreme Court Hands Down Major Victory to Freedom-Loving Americans by Miguel A. Faria, MD

Until today, the Supreme Court of the United States (SCOTUS) had not made it clear that the right to keep and bear arms is protected outside the home; but now it has!

Townhall’s headline today reads, “Supreme Court Hands Down Biggest Second Amendment Victory since Heller.” Indeed, this is a major historic ruling. The article continues, “The Supreme Court on Thursday handed down its opinion in a landmark Second Amendment rights case, the biggest win for gun rights since the court’s Heller ruling holding that ‘New York’s proper-cause requirement violates the Fourteenth Amendment by preventing law-abiding citizens with ordinary self-defense needs from exercising their Second Amendment right to keep and bear arms in public for self-defense.’ ”

Justice Clarence Thomas, who wrote the majority opinion in this landmark ruling, explains:

In District of Columbia v. Heller, 554 U. S. 570 (2008), and McDonald v. Chicago, 561 U. S. 742 (2010), we recognized that the Second and Fourteenth Amendments protect the right of an ordinary, law-abiding citizen to possess a handgun in the home for self-defense. In this case, petitioners and respondents agree that ordinary, law-abiding citizens have a similar right to carry handguns publicly for their self-defense. We too agree, and now hold, consistent with Heller and McDonald, that the Second and Fourteenth Amendments protect an individual’s right to carry a handgun for self-defense outside the home.

Justice Thomas further explained that the Second Amendment is a momentous, not a secondary, Constitutional and Natural Right — a God-given right that belongs to ordinary citizens, to “the people” cited by the Constitution and that it cannot be trampled by government! He goes on to say:

The constitutional right to bear arms in public for self defense is not “a second-class right, subject to an entirely different body of rules than the other Bill of Rights guarantees.” We know of no other constitutional right that an individual may exercise only after demonstrating to government officers some special need. That is not how the First Amendment works when it comes to unpopular speech or the free exercise of religion. It is not how the Sixth Amendment works when it comes to a defendant’s right to confront the witnesses against him. And it is not how the Second Amendment works when it comes to public carry for self defense. New York’s proper-cause requirement violates the Fourteenth Amendment in that it prevents law-abiding citizens with ordinary self-defense needs from exercising their right to keep and bear arms. We therefore reverse the judgment of the Court of Appeals and remand the case for further proceedings consistent with this opinion.

This new ruling — i.e., New York State Rifle & Pistol Association v. Bruen — has been long in coming. Consider that by a 5-4 decision in District of Columbia v. Heller (2008), the Supreme Court struck down Washington, D.C.’s handgun ban, and in McDonald v. Chicago (2010) in a very similar 5-4 decision, it struck down Chicago’s draconian handgun ban.

Yet, these 5-4 decisions were hanging by threads. Chief Justice John Roberts had become unpredictable as a constitutionalist. Moreover, the liberal Justices’ dissent at the time provided a clear warning: “The Supreme Court is just one vote away from totally reversing District of Columbia v. Heller and McDonald v. Chicago.” History has fortunately proven them wrong at least for the foreseeable future. Liberals will seek other ways to implement gun control measures through the back door and concerned citizens must remain informed and vigilant.

And when we look at the other Natural or God-given rights guaranteed by the Constitution, we see that all of them apply to individuals both in and outside the home, including the prohibition against the quartering of soldiers in people’s home, a right enumerated in the Third Amendment. And when it comes to the First Amendment — “Congress shall make no law respecting an establishment of religion, or prohibiting the free exercise thereof; or abridging the freedom of speech, or of the press; or the right of the people peaceably to assemble, and to petition the Government for a redress of grievances” — we have to admit that we have also moved in an authoritarian direction, contrary to the Constitution’s prohibitions.

We have been guaranteed the free exercise of religion, although this right was selectively curtailed by the farce of the COVID-19 lockdowns. We have also been guaranteed freedom of speech, although this right has been truncated by insidious political correctness and the mere accusation of hate speech, as determined by the Thought Police of the Democrats, Marxist academicians, and the liberal media. As for peaceful assemblies and the redress of grievances, anarchists and communists infiltrating Black Lives Matter (BLM) and Antifa have been given a go-ahead for not-so-peaceful assemblies — or rather riots with violent looting and burning! Thus, as in George Orwell’s Animal Farm, some animals are more equal than others.

Until today, the Supreme Court had turned down several attempts to challenge the various Circuit Court decisions upholding restrictive concealed carry legislation in Maryland, New Jersey, and California. In California, the Ninth Circuit Court denied that the Second Amendment protects the right to carry concealed weapons in public. Justices Clarence Thomas and Neil M. Gorsuch had expressed regret that the Supreme Court failed to take up the challenge of the California case and believed it was high time SCOTUS ruled on the issue of public carrying legislation and affirm the Second Amendment right outside the home. At last this issue has now been satisfactorily settled!

The issue of the constitutionality of “assault weapons” has still not been settled. These beneficial semi-automatic firearms with paramilitary-style looks have been under attack on both the federal and state levels. Despite their usefulness for sports shooting as well as life-saving tools during natural catastrophes, urban unrest, and self-defense against multiple criminal assailants, these firearms have been so maligned that some courts are yet to rule favorably on their constitutionality. On November 27, 2017, the U.S. Supreme Court refused to take up Maryland’s assault weapons ban. The Fourth Circuit Court of Appeals upheld Maryland’s Firearm Safety Act of 2013, banning the AR-15 “and other military-style rifles and shotguns.” Apparently, semi-automatic “assault weapons” were confused with fully automatic “assault rifles” and characterized as military weapons, and thus excluded from Second Amendment protection. Interestingly, the judge who wrote the majority decision stated, “Put simply, we have no power to extend Second Amendment protection to the weapons of war that the Heller decision explicitly excluded from such coverage.” Curiously, it was precisely in Miller v. U.S. (1938), the last major federal ruling on the Second Amendment until the Heller decision in 2008, that ownership of military-style weapons were specifically protected as a pre-existent individual right by the Second Amendment. This issue needs to be settled.

Returning to the Townhall news piece, authored by Spencer Brown, the article goes on to say that in his concurring opinion, “Justice Samuel Alito noted that ‘Today, unfortunately, many Americans have good reason to fear that they will be victimized if they are unable to protect themselves. And today, no less than in 1791, the Second Amendment guarantees their right to do so.’ ”

I believe that all freedom-loving Americans, not just Second Amendment proponents, should be jubilant about this ruling because the First Amendment on freedom of speech does not protect liberty, as we thought. Political correctness, as we have seen of late, has eroded religious freedom as well as freedom of speech. When authoritarianism and tyranny loom big on the horizon, it is the Second Amendment that is left to protect all the others!

This article also appeared on GOPUSA.com on June 24, 2022, and on TheTruthAboutGuns.com on June 25, 2022 as, “The Bruen Ruling Should Please All Freedom-Loving Americans.”

This article may be cited as: Faria MA. The Supreme Court Hands Down Major Victory to Freedom-Loving Americans. HaciendaPublishing.com, June 23, 2022. Available from: https://haciendapublishing.com/the-supreme-court-hands-down-major-victory-to-freedom-loving-americans-by-miguel-a-faria-md/.

1 thought on “The Supreme Court Hands Down Major Victory to Freedom-Loving Americans by Miguel A. Faria, MD”