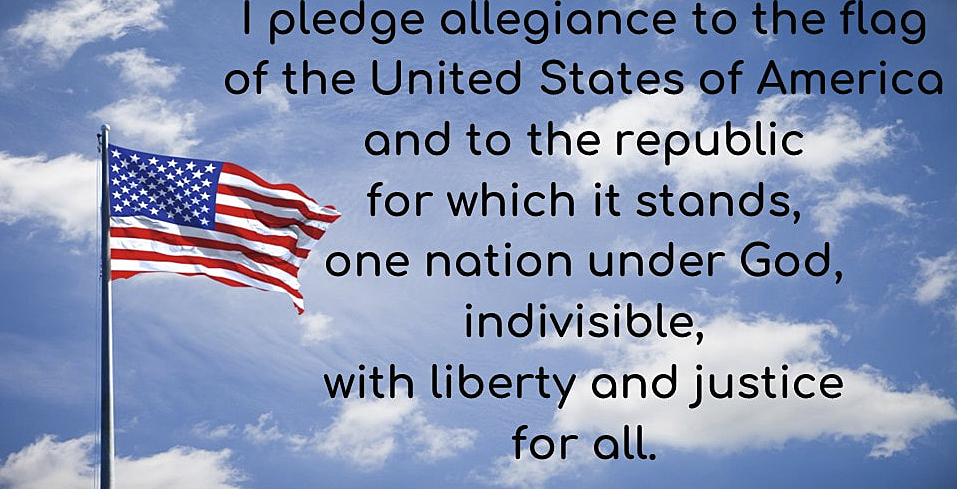 The Pledge of Allegiance and the Separation of Powers

The 9th U.S. Circuit Court of Appeals ruling declaring the Pledge of Allegiance unconstitutional because of the words “under God” is another symptom of the progressive, liberal judicial insanity that has been permeating our society since the 1960s. Our Constitution gives us freedom of worship, not proscription of religion.

Thomas Jefferson warned us that judicial activism could lead to tyranny and chaos if unchecked. The chickens have come home to roost.

The U.S. Constitution establishes freedom of religion in the First Amendment: “Congress should make no Law respecting an establishment of religion, or prohibiting the free exercise thereof.”

Recognizing where this has led in other countries such as Cuba and the former Soviet Union, we have been proscribing religion from public places and society at large, including government (public) schools. This separation of church and state has been taking place drastically since the 1960s, ironically at about the same time Fidel Castro was proscribing religion in Cuba.

Cuba, as an officially atheistic state, as might be expected, goes much further implementing tyranny without religion. Is that where we want to go?

Because of our jettisoning of the Judeo-Christian principles upon which this nation was founded, coupled with the growth of government in our private and public life, our children have suffered greatly and are growing up devoid of a moral compass.

People worry about children with guns, violence in schools, street crime, and wonder why we have so much of them, so much immorality, crime, broken families, etc. This disintegration of the moral foundation of our society has been the result of a series of rulings such as this.

I would have thought this insanity would have been jolted out of the liberal mind of the cultural opinion molders in society after September 11, but apparently it has not ­ judicial activism, political correctness, zero tolerance and all the other nonsense we have inured for decades will continue.

One gleam of hope is that the 9th Circuit Court is not only the most left-wing but also the most overturned appeals court in the country. States under its jurisdiction include Alaska, Arizona, California, Hawaii, Idaho, Montana, Nevada, Oregon and Washington.

School prayer and the Ten Commandments have already been removed from government schools and most public places. What will be next ­ “God bless America,” “America the Beautiful,” “In God We Trust,” etc.?

Let us hope the Supreme Court ends this nonsense and rules appropriately.

If not, there is a remedy: There is a clause in the Constitution that provides for Congress to remove the judiciary from certain issues in which the courts have erred. Article III, Section 2 provides that the Supreme Court “should have appellate jurisdiction, to both Law and Fact with such Exceptions, and under such Regulations as the Congress should make.” In other words, Congress can take issues away from courts as necessary to save the nation.

The Founding Fathers provided a system of checks and balances in our Constitution. As discussed in “The Federalist Papers” by James Madison, “the master builder of the U.S. Constitution,” the states were to check the power of the federal government.

Does anyone remember the Ninth and 10th amendments to the U.S. Constitution? That balance has effectively been lost, to the detriment of the citizenry, who have always been closer to their local and state representatives than to the faraway, impersonal, unaccountable bureaucrats who de facto run the federal leviathan.

The other balance of power was provided by the separation of powers in the three branches of the federal government, legislative, executive and judiciary. They were to check the power of each other, with the judiciary branch being the weakest. Rather than checking each other’s power, they have been, over the years, cooperating in the federal usurpation of power from the states and the people.

Over the years, Congress has refused to take political issues away from the courts as provided in the Constitution, not even when absolutely necessary. Why?

Over the years, Congress has passed a torrent of unconstitutional legislation that has been signed onto law by presidents of both parties, from gun control, foreign aid, welfare and other wealth redistribution schemes to education and health care, authorizations that are not made in the Constitution.

The judiciary has failed to rule any of these measures unconstitutional, so that 75 percent of all federal activities are unconstitutional, according to Walter Williams, Distinguished Professor of Economics at George Mason University.

All of these activities are funded by unwary taxpayers whose lives are drastically and detrimentally affected by the increasing scope and power of the federal government. As Thomas Jefferson warned us: “The natural progress of things is for liberty to yield and for government to gain ground.”

I can think of no better time for Congress to demonstrate that there is no quid pro quo working against the interest of the citizens among the three branches of the federal government and use the aforementioned clause to end this insanity of complete “separation of church and state” and the proscription of the Judeo-Christian principles upon which this nation was founded.

Miguel A. Faria Jr., M.D., is Editor-in-Chief of the Medical Sentinel and author of Cuba in Revolution: Escape From a Lost Paradise, 2002.

This article may be cited as: Faria MA. The Pledge of Allegiance and the Separation of Powers. NewsMax.com, June 27, 2002. Available from: https://haciendapublishing.com/the-pledge-of-allegiance-and-the-separation-of-powers/.