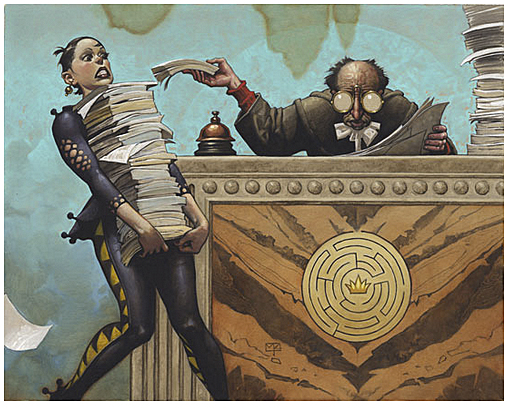 Recently, I purchased a firearm at a gun show and had an experience that once again solidified my distaste for collectivist bureaucracies. I often tell my wife and my sons, Ron and Damien, the three people I most often share ideas with, that you would think Americans have had enough experience dealing with bureaucracies at different levels in society that they would see the folly of the greatest bureaucratic scheme of all — socialism/communism. These collectivist systems have as their foundation a multitude of interlocking bureaucracies, which act as judge, jury, and executioner (often literally).

Anyway, back to the story. After filling out the form, the sweet lady asked to see my driver’s license and concealed-carry permit. Earlier in the week I had gone to the State Patrol Headquarters and renewed my permit. It had not expired, but they notified me that it soon would and that I could go ahead and renew it.

I received the new permit that day and once home took the old permit out of my wallet and replaced it with the new one. As the lady was filling out the bureaucratic forms she suddenly stopped, looked at me with a sick look, and told me that according to the date, my new permit would not be active for two more days.

I attempted to reason with her, but she insisted that the federal bureaucrats would not accept it because the date of purchase of the gun differed from the activation date of the new permit card. I smiled and tried to remain calm. I told her that the state bureaucrats sent me a notice to renew my card and that I could do it before the old one expired. Therefore, based on all the laws of logic, the card should be valid. She apologized effusively, but told me she could not accept the card as valid, she would have to call it in. This took only a few minutes and was really not a big inconvenience — but it was a matter of principle.

I explained to her that I could renew my driver’s license early and did not have to keep the old one to show a police officer who might stop me. He would recognize that it is a valid renewed license. But not so with the “federales.” They do not deal in logic as we know it.

I have often told people that trying to reason with a federal agency is like trying to reason with a tape recorder. No matter how powerful, crafted in good logic and articulate your arguments are, the tape recorder will only repeat the same message over and over. Logic has no place in collectivism. Reason and logic are anathema to the leftists, otherwise they would not be leftists.

Whenever I explain the failing of socialism/communism (collectivism) to people the central point is that one does not reason one’s self into such belief systems — they cannot as the systems are illogical and self-contradicting. To say that one is establishing a system that is egalitarian and fairer by expanding the money supply to pay for an ever-expanding system of welfare programs is self-negating. The more money you print, the greater the inflation rate and the higher prices become. The hardest hit by these inflated prices are the poor and the person on a fixed income, the very people they claim to be assisting.

Their answer to this conundrum is to further expand the welfare largess. Yet, this necessitates an even greater expansion of inflated currency, drastically worsening the problem and throwing more people into the dependent class. Incredibly, this is just what they want — it means more voters and that any attempts to return to a truly free market economy will be met by violent opposition — as witnessed in France when the government attempted to institute even a mild austerity program. The French youth took to the streets and burned cars and stores to make their point — i.e., that socialism should not mean responsibility.

Bureaucracies mean you never have to say you are sorry. This is because in the mind of the bureaucrat, they are never wrong. This is why totalitarian socialist systems always first control all speech — they cannot tolerate being told that they have made an error or that a program is actually destructive toward the purpose of its creation. To allow free speech would risk the rise of general dissatisfaction by the populace. The truth must be swaddled in a thick layer of lies and distortions — what I have termed “managed truth.”

In the communist systems, when store shelves were empty or products were shoddy it was because of the elusive “saboteur,” the “enemy of the state,” never the inequities of the system itself. When health care was on a level that was medieval, hospitals were in disrepair, waiting times were excessively long and medications were in short supply, but the intrinsic failures of socialized medicine weren’t blamed, instead doctors were labeled greedy and uncaring and patients were told they had unreasonable expectations.

Bureaucracies are cold, uncaring, unreasonable institutions that operate only for their own benefit and not to fulfill the illusory vision of the socialist dreamer who sold the public this system on the basis of just that — a utopian illusion. They have no vision; they could care less about the poor, the disadvantaged and the suffering; they are there only to keep the wheels of the socialist machine grinding. Anyone who interferes with this giant, clanking, monstrosity risks the fury of the enforcers. The enforcers can strike terror into anyone’s heart, as the penalties can be severe and destroy one’s very life. There is rarely a reprieve or forgiveness, especially if you have been classed as an “enemy of the state,” (a collectivist and totalitarian concept) which is unbelievably easy to do. Any criticism of the state’s many programs can put you on this terrifying list. Just look how easy it has been to have your name added to the “no fly list” by the black-shirted TSA bureaucracy. In fact, your name can end up on this bureaucratically created list without your knowledge and beyond any review. It is all but impossible to have your name removed. Famous people, actors, congressmen and even a presidential candidate have ended up on this terrifying list.

The NSA can read all your emails, listen to your phone calls, even enter your home with listening devices and cameras and to appeal to the judicial system on the basis of the Bill of Rights or other privacy laws is a useless as trying to reason with that taped message on a tape recorder. The NSA cannot be reasoned with. Examples of this principle of the inanimate behavior of bureaucracies are endless and everyone has a story about their own experiences, yet many are still attracted to the siren song of the leftist utopian seeking an absolutist state. Somehow, in their feeble minds, the new utopian state will be different — it will be manned by people who can be reasoned with and who truly care about the “people” (another collectivist term). In essence, in the mind of these dreamers, the new collectivist state will be ruled by angels.

Dr. Russell L. Blaylock is President of Advanced Nutritional Concepts and Theoretical Neurosciences Research, LLC, in Jackson, Mississippi. He has written numerous path-blazing scientific papers and many books, including Excitotoxins: The Taste That Kills (1994), Bioterrorism: How You Can Survive (2001), Health and Nutrition Secrets (2002), and Natural Strategies for Cancer Patients (2003). He is Associate Editor-in-Chief and a Consulting Editor in Basic Neuroscience for Surgical Neurology International (SNI). His websites are: www.blaylockwellnesscenter.com and www.russellblaylockmd.com.

This article can be cited as: Blaylock RL. The Mystical Nature of (Collectivist) Bureaucracies. HaciendaPublishing.com, January 13, 2015. Available at: https://haciendapublishing.com/the-mystical-nature-of-collectivist-bureaucracies-by-russell-l-blaylock-md/.