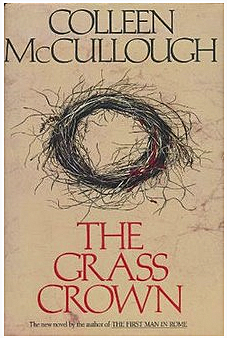 The Grass Crown — Ancient Rome: Marius vs Sulla and the Marsian Wars!

The magnificent “Masters of Rome” series of historic fiction by novelist Colleen McCullough continues down the annals of the Roman Republic with the notable careers of Gaius Marius, Lucius Cornelius Sulla, Aemilius Scaurus, Metellus Numidicus, Metellus Pius, and Marcus Livius Drusus. This second tome at 894 pages also contains magnificent maps, improved glossary, and sketch portraits of many of the main characters. The scholarship still astonishes as does the crisp writing and exhilarating reading in this historic drama. The informative and elegant correspondence to and from Rutilius Rufus, now expanded to Scaurus and Sulla, continues in The Grass Crown.

Nevertheless, we are still obliged to point out deficiencies in this second historic novel as we did with the first one for the same reasons. The apotheosis of her main protagonist, Gaius Marius, continues to the detriment of other historic figures, despite the author’s claim to historic veracity and her outstanding scholarship. Her politics and her prejudicial bias for the Populares faction at the expense of the Optimates distorts the personalities, motives, and true attitudes of the historic figures and detracts significantly from the historical veracity she claimed in her works.

The First Man in Rome spanned the period 110-100 B.C.(1) The Grass Crown spans the years 97-86 B.C. and covers extensively the Social War between the Roman masters and their former Italian Allies (Socii) between 91 to 88 B.C.(2) The life-death struggle in the peninsula brings to life the characters of the Roman leaders, Catulus Caesar, Licinius Lucullus, Mamercus Aemilius and particularly Lucius Cornelius Sulla, who receives from his legions the coveted corona graminea (“the Grass Crown”) for valor in saving the Roman army from certain defeat and hailed imperator by his troops in the field for defeating the enemy in front of the Samnite stronghold of Nola. The Italian insurrectionists led by the courageous Marsian leader Quintus Poppaedius Silo and the belligerent, Roman-hater, Samnite chief Gaius Papius Mutilus are heroically portrayed. The conflicts with King Mithradates VI of Pontus and King Tigranes II of Armenia are also outlined and vividly described. Most poignant, and unenviable of all are the personal and family entanglements of Marcus Livius Drusus and his friend-turned-enemy, young Servilius Caepio, and their sisters, their double marriages, their children, and concurrently Marcus Livius Drusus’ indefatigable political efforts to secure Roman citizenship for all Italians, which led to his fateful assassination. For the most part, all of this narrative is historically accurate, and the novelistic license of speeches is within the range of plausibility and actions comport with historic truth, significantly enhancing the suspense and drama of the novel.

If an ennobled and beatified Gaius Marius and a demonized, degraded Sulla are definitely the main protagonists in The First Man in Rome, a lovable Marcus Aemilius Scaurus, Princeps Senatus, almost steals the show in her second book along with Marcus Livius Drusus, as we have intimated. This is true for at least the first part of The Grass Crown. The complaints of the Italian Allies and their subsequent revolt against Rome is convincingly and poignantly narrated. The domestic political struggle of the Senate, the Order of the Roman Knights or Equites (Ordo Equester), and the people continue to entertain, inform, sometimes polarize, and frequently disrupt the machinery of the government of the Republic to the consternation of the Senate and those Romans, Patrician or Plebeian, who upheld the mos mairorium —i.e., the old forms and traditions of the Roman Republican institutions.

Lamentably, the historical reputation of the conservative nobility, be they Patrician or Plebeian,  as in her first book, The First Man in Rome, continues to be deliberately besmirched by the fictional embellishment of the author — all the way from the retrospective references to the Gracchi brothers and their political opponents, the conservative Scipios (i.e., Scipio Aemilianus Africanus and Scipio Nasica) — to the time of Marius and Sulla. We wonder how with this corrupt Roman nobility, incompetent leadership, self-interested Senate and mediocre generals and consuls, the aristocratic Roman Republic achieved the conquest of the Western world, halted the barbarian hordes, constructed engineering marvels, such as bridges, roads and aqueducts, codified magnificent laws, and lasted 5 centuries in which Roman citizenship was coveted and treasured, civilization spread, and commerce flourished. Even after Augustus triumphed nearly a century later, the forms (although not the substance) of Republican government with consuls, Senate, divided powers, etc. were maintained and lasted another 300 years.

Marius and Sulla collaborate in the Social War against the Italians but once this savage conflict is settled, and new hostilities arise in the East in the form of the barbarities and invasions by Mithridates VI, King of Pontus, legal command of the new war is given to Sulla because Marius, now advancing in age and in declining years, is no longer fit for command. McCullough partially incapacitates (and excuses) Marius with a series of strokes, thus explaining his irresponsible, mad, criminal behavior in his final years. Plutarch does not ascribe Marius’ belligerency and cruelty to stroke. In fact, Marius’ illness is not described by Plutarch as a stroke or an affectation of his mind but to his latent personality. And when he was not given overall command of the Roman army in the Social War or the war against Mithridates, it was because of his age and declining years (not only was he old but also corpulent): “Marius who was thought tardy… the people bade him to go to the baths at Baiae, to cure his body worn out, as he himself had confessed, with age and catarrh.”(3) Be that as it may, from McCullough’s “strokes,” Marius recovers twice, and this turns out to be a disaster for Roman history.

Sulla was elected consul in 88 B.C. with his colleague Quintus Pompeius Rufus. He won the corona graminea, the highest military honor awarded by the Roman legions in battle, toward the end of the Social or Marsian War. It was awarded to Sulla for personal bravery, when during the battle the Roman army, facing annihilation and threatening to rout, Sulla forced a rally of the troops, counterattacked, and by his personal efforts saved the Roman army in the field in front of the fortified Italian enemy city of Nola. The crown made from woven grasses from the battlefield was solemnly placed on his head by the leading centurions upon acclamation by the legions.

The Social War was ending with victory for Rome and reconciliation with the Italians was being accomplished by extending them the coveted Roman citizenship. A new confrontation was brewing in East, where King Mithridates of Pontus had succesfully organized a conspiracy that resulted in the massacre of 150,000 Romans, Italians, and their slaves throughout the Hellenistic world.

Sulla was made commander-in-chief of the army and made preparations to march East to confront the new hostilities commenced by the troublesome Mithridates VI, perpetual thorn in Rome’s side. As if this was not enough, as Sulla prepared to depart from Brundisium, he learned the demagogue Publius Sulpicious Rufus, Tribune of the Plebs, in cahoots with Gaius Marius, reversed Sulla’s command and gave it to Marius. Immediately, Sulla took six of his legions and made the fateful decision to march on Rome, an unprecedented action in the history of the Republic, to reassert his constitutional mandate as Consul and commander-in-chief. He was supported by one of his gifted commanders, Lucius Licinius Lucullus. He easily defeated and routed his Marian opponents and entered the city victorious. Marius and his son escaped, but Sulpicius was assassinated by one of his slaves. Sulla reestablished order, strengthened the power of the Senate and then proceeded with his plan to depart with his army and defeat the various Mithridatic forces massed in Greece and Asia.

After a series of adventures and misadventures Marius escaped to Africa and was reunited with his son, Young Marius. With Sulla now in the East fully occupied in fighting Mithridates, Marius and his followers, who had been reassembling, seized the opportunity and returned to Rome in 87 B.C., where Marius allied himself with the leader of the Populares faction, the consul Lucius Cornelius Cinna, who was busy in Rome dismantling Sulla’s reforms.

Marius seized the opportunity in the rampant civil strife and returned with a small armed force to Rome, pledging his support to the consul Cinna. With Cinna’s cooperation and using force and unprecedented violence, they reestablished themselves in Rome and began exterminating Sulla’s friends. Marius proved he would do anything to fulfill his prophesied and much coveted seventh consulship, which he achieved in 86 B.C. Mad, revengeful, and now criminally insane, Marius turns loose his personal bodyguard and slave army, his savage but loyal Bardyaei, on the defenseless citizens of Rome, wreaking death and destruction in the city. But with his third and final “stroke,” only 17 days after attaining his last consulship, Marius dies leaving his Bardyaei on the loose and his son, Young Marius, and the Consul Cinna in command. The city hopes for Sulla to return and put an end to the anarchy.

Miguel A. Faria, Jr., M.D. is Clinical Professor of Surgery (Neurosurgery, ret.) and Adjunct Professor of Medical History (ret.) Mercer University School of Medicine. He is an Associate Editor in Chief and World Affairs Editor of Surgical Neurology International (SNI), and an Ex-member of the Injury Research Grant Review Committee of the Centers for Disease Control and Prevention (CDC). 2002-05; former Editor-in-chief of the Medical Sentinel (1996-2002). Author, Vandals at the Gates of Medicine (1995); Medical Warrior: Fighting Corporate Socialized Medicine (1997); and Cuba in Revolution: Escape From a Lost Paradise (2002). His website is https://HaciendaPublishing.com.

This article may be cited as: Faria MA. The Grass Crown — Ancient Rome: Marius vs Sulla and the Marsian Wars! HaciendaPublishing.com, June 6, 2013. Available from: https://haciendapublishing.com/the-grass-crown–ancient-rome-marius-vs-sulla-and-the-marsian-wars.

The photographs used to illustrate this exclusive article for Hacienda Publishing came from a variety of sources and do not necessarily appear in Colleen McCullough’s The Grass Crown. A shortened and unillustrated version of this article appeared also in Amazon.com book reviews.