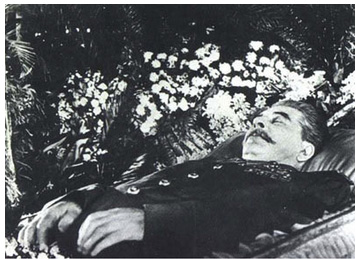 The death of Stalin — Was it a natural death or poisoning?

The late scholar and medical researcher Plinio Prioreschi (1930–2014) MD., Ph.D., warned physicians and surgeons of the danger of neglecting medical history and delegating the task to social historians or journalists with little or no medical or surgical knowledge. Dr. Prioreschi summarized the point by stating that competent medical history is medicine. Medicine being a very esoteric field cannot easily be mastered by non-physicians. Prioreschi wrote, “the asymmetry (in esoterism) between science and the humanities…allows the physicist to be a poet but forbids a poet to be a physicist.”[5] The same goes for historians and physicians. Because of the high degree of esoterism involved in medicine, physicians can be historians, but historians cannot be physicians without training in medicine.[5] The mysterious death of Stalin is an excellent and instructive case in point.

On the fiftieth anniversary of Joseph Stalin’s death, the British newspaper, the Daily Mail, headlined, “It’s official! Stalin died of natural causes: Autopsy published for 1st time says Soviet leader suffocated after suffering a stroke death as from ‘natural causes.’”[4] Neither the journalist nor historian involved in this article apparently were aware of the article I wrote in Surgical Neurology International 2 years previously concluding with the strong possibility of the complete opposite. Two previous books[2,6] had already done a lot of footwork on Stalin’s final hours and ended, as I did, strongly suggesting the possibility that Stalin was poisoned by members of his own inner circle, led by the head of the secret police, Minister of State Security Lavrenti Beria.[3] The work of those authors was supported by the portion of the autopsy report that was published in Pravda in 1953 and which I cited in my article:

“AUTOPSY OF THE BODY OF J. V. STALIN: Postmortem examination disclosed a large hemorrhage in the sphere of the subcortical nodes of the left hemisphere of the brain. This hemorrhage destroyed important areas of the brain and caused irreversible disorders of respiration and blood circulation. Besides the brain hemorrhage there were established substantial enlargement of the left ventricle of the heart, numerous hemorrhages in the cardiac muscle and in the lining of the stomach and intestine, and arteriosclerotic changes in the blood vessels, expressed especially strongly in the arteries of the brain. These processes were the result of high blood pressure.

“The findings of the autopsy entirely confirm the diagnosis made by the professors and doctors who treated J. V. Stalin.

“The data of the postmortem examination established the irreversible nature of J. V. Stalin’s illness from the moment of the cerebral hemorrhage. Accordingly, the energetic treatment which was undertaken could not have led to a favorable result or averted the fatal end.

What the Daily Mail journalist and the social historian did not understand is that if there was evidence of hemorrhage in any body system other than the brain, then this was strong evidence for a bleeding diathesis or poisoning as I described. Stalin did not have a history of a bleeding diathesis or treatment with anticoagulation, therefore poisoning by systemic anticoagulation is the most likely cause for the “numerous hemorrhages in the cardiac muscle and in the lining of the stomach and intestine.”[1]

If the bleeding had been restricted to the brain, as with a hypertensive cerebral hemorrhage, then we could have safely ascribed the cause of death as “suffocation after suffering a stroke,”[4] but that was not the case. I conveyed this information to the historian consulted by the Daily Mail and asked for clarification, comment or rebuttal but received no response. And so I correct the record with this correspondence in SNI.

I explained in my article why the Soviet doctors, who signed the autopsy report, may have been reluctant to propound any cause of death other than natural causes. Lavrenti Beria, the head of the secret police, was then the head of the ruling hierarchy in the Soviet Union, and it was he who would have been the number one suspect. The admission of poisoning of Stalin would have led to Beria as a suspect if not the culprit. So poisoning as the cause of death would have been out of the question as the official cause of Stalin’s death in the official autopsy report.

The doctors from the Ministry of Health who signed the autopsy and other medical reports acted cautiously:[3]

As much as was possible to put in writing from a political standpoint, without getting their own heads into the repressive Soviet noose (was included in the autopsy report)! They also correctly protected the physicians who treated Stalin. Needless to say, the Doctors’ Plot episode was very fresh in their minds.[2]

While prudently citing hypertension as the culprit, the good doctors left behind enough traces of pathological evidence in their brief report to let posterity know they fulfilled their professional duties, as best they could, without compromising their careers or their lives with the new masters at the Kremlin. High blood pressure, per se, commonly results in hypertensive cerebral hemorrhage and stroke but does not usually produce concomitant hematemesis (vomiting blood), as we see here in the clinical case of Stalin, and a further bleeding diathesis affecting the heart muscle, scantily as it is supported by the positive autopsy findings.

As I have written elsewhere, we now possess clinical and forensic evidence supporting the long-held suspicion that Stalin was indeed poisoned by members of his own inner circle, most likely Lavrenti Beria, and perhaps even Nikita Khrushchev, all of whom feared for their lives. However, Stalin, the brutal Soviet dictator, was (and still is in some quarters of Democratic Russia) worshiped as a demigod — and his assassination would have been unacceptable to the Russian populace. So it was kept a secret until now.[3]

I have concluded this letter citing my previous article above, as it remains unchallenged with no new disputing scholarship in the medical or historical literature. We continue to believe Stalin was poisoned unless the autopsy findings cited above are found to be erroneous or fabricated, which is very doubtful.

This article was originally published in Surg Neurol Int 2015;6:128.

This article can be cited as: Faria MA. The death of Stalin — Was it a natural death or poisoning? Surg Neurol Int 2015;6:128. Available from: https://haciendapublishing.com/the-death-of-stalin–was-it-a-natural-death-or-poisoning.