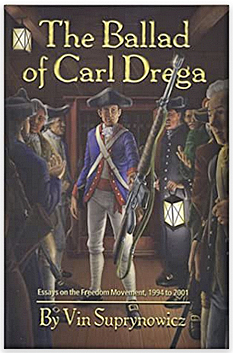 The Ballad of Carl Drega — A Book Review

You may not agree with every expression or thought written by Las Vegas Review-Journal columnist and syndicated journalist Vin Suprynowicz, but if you are a libertarian or a true conservative (and/or constitutionalist), you will cheer and applaud his astonishing, eye-opening new book, The Ballad of Carl Drega: Essays on the Freedom Movement, 1994 to 2001.

But I warn you, if you are a bed-wetting, bleeding-heart liberal with a penchant for statism, socialism, collectivism, authoritarianism, welfarism or any of the associated modern “isms” — beware!

Yes, the uncompromising stance of Suprynowicz in his indefatigable pursuit of freedom will inflame the minds of those who worship omnipotent government and the State at the expense of individual freedom — inflame them to catalystic internal combustion.

And yet, despite his passion and his stridency (something of which he is proud), it’s the spark of freedom, not polemical argumentation, Suprynowicz wants to ignite in the hearts of his readers.

The book consists of a succinct introduction, which sets the tone for the rest of the book, followed by 16 sections including a postscript and two brief appendices (resources).

The introduction contains a brief but masterful discussion of the true meaning of political compromise, based on Ayn Rand’s 1962 essay, “Doesn’t life require compromise?” which should be studied by the modern-day politicians, who are constantly sacrificing liberty and goodness to evil and slavery on the altar of expediency and political correctness.

The powerful part “Live Free or Die: How Many More Carl Dregas?” is a shocking revelation of how we, the American citizens of this great nation, formerly in the land of the free, home of the brave, are losing our freedom, step-by-step, marching toward a virtual police state.

Those who have finally stood up for individual freedom and their private property rights have been crushed with hardly a whimper. Why? Because the lapdog, mainstream media have been complicit with the State in keeping the public at large in the dark about these incidents.

Suprynowicz then proceeds with the dramatic story of Carl Drega, followed by those of Gary Watson, Donald Scott, David Aguilar, Ralph Garrison and others. Unlike Waco and Ruby Ridge, none of these cases are well known, but they should be!

In fact, as Suprynowicz writes, “The real significance, I believe, lies in the fact you’ve never heard of them. Or, if you have, that no magazine writer, no TV reporter, no documentarist has ever before juxtaposed all these deaths at the hands of the regulatory state.”

Suffice to say here, Carl Drega was a citizen of New Hampshire, whose state motto is “Live Free or Die.” Suprynowicz writes, “Carl Drega was different from most of us, all right. He believed the motto still meant something.”

Who was Carl Drega and what did he have in common with even lesser-known American citizens who have been trampled by the regulatory machinery of the state? They were finally pushed too far by the statist bureaucrats and the regulatory enforcers, who thought that not one of these little citizens would ever dare oppose the oppressive government edicts that they wrote and/or enforced.

But these essentially unknown heroes fought back and some of them fought back well — trying to protect their private property rights, their civil liberties, their dignity and their freedom.

Suprynowicz explains: “In little more than 30 years, we have gone from a nation where the ‘quiet enjoyment’ of one’s private property was a sacred right to a day when the so-called property ‘owner’ faces a hovering hoard of taxmen and regulators threatening to lien, foreclose, and ‘go to auction’ at the first sign of private defiance of their collective will.”

He goes on to further explain, citing cases such as that of Carol Pappas, in which, to exploit the small, defiant property owner, the State actually acted in collusion with giant private interests, applying unjust laws and forming a corrupt “relationship between government and private property rights that my dictionary defines as ‘fascism.’ “

Indeed. And he is further correct, the government realizes that an armed citizenry in this country at some point will reach its limit and become an explosive obstacle to further erosion of private property rights — surreptitiously, gradually, as this process is occurring.

Unless the government changes course, sooner or later we may take notice of the loss of our freedom, realize that we may have been pushed too far — and, finally, it may dawn upon us, individually or collectively, that today may be, if necessary, a good day to die for our rights and our liberty.

Suprynowicz writes: “This is why the tyrants are moving so quickly to take away our guns. Because they know in their hearts that if they continue the way they’ve been going, boxing Americans into smaller and smaller corners, leaving us no freedom to decide how to raise and school and discipline our kids, no freedom to purchase (or do without) the medical care we want on the open market, no freedom to withdraw $2,500 from our own bank accounts (let alone move it out of the country) without federal permission, no freedom even to arrange the dirt and trees on our own property to please ourselves ‘if they keep going down this road, there are going to be a lot more Carl Dregas, hundreds of them, thousands of them, fed up and not taking it anymore.'”

He is not advocating an armed insurrection at this time, but, Suprynowicz insists, we must get angry and we must be vigilant if we are to preserve what remains of our freedom. As far as timing, though, he warns: “When is the right time to say, ‘Enough, no more. On this spot I stand, and fight, and die?’ When they’re stacking our luggage and loading us on the boxcars? A fat lot of good it will do us then.”

For this tome, which is written in crisp, almost conversational style, Suprynowicz expounds on his newspaper columns and enhances the narrative by inserting relevant correspondence from his readers to document with appalling reality the growth of government into every aspect of our lives — and the gradual loss of our sacred legacy of liberty.

To attempt to give further justice to this book, I should at least cite another excellent section of the book, “Afraid of Freedom — Afraid of Guns.” This and other sections on firearms and the Second Amendment are superbly written, lucid and informative, even to some of us who have more than a cursory knowledge of the subject.

The reader will find here gems of information that will help him “disarm” any gun prohibitionist pushing his gun control agenda with the usual intellectually empty, emotional rhetoric.

You will be reminded, for example, of the true meaning and derivation of the term “well-regulated militia,” on the one hand, and the fictitious shibboleth “12 children killed by firearms everyday in America,” on the other. Ditto for such non-arguments that the militia of the Founding Fathers is today’s National Guard — particularly when the National Guard only came into existence in 1917!

The sections on the Second Amendment, like the rest of his book, not only are superbly written but also demonstrate the wide knowledge and ability of the author to draw historic and geopolitical parallels to other countries, particularly those that have instituted gun control as opposed to those that have chosen to trust their citizens with firearms and freedom.

Thus, he draws stark contrast between such countries as Japan today, the Weimar Republic and Nazi Germany in the 1920s to 1940s in contradistinction to Switzerland today and the United States in years past.

He writes: “In Germany in the 1920s, most citizens — notably including the Jews — tried to prove they were ‘law-abiding’ by turning in their firearms as required by law. Many of them found cause to regret that decision in the years after 1939. In desperation and at incalculable expense, the Jews of the Warsaw ghetto did finally fight a two-month rebellion against their armed oppressors. ‘”

And he does more than propound information and arguments. He corresponds with readers who write him, both pro and con, about his newspaper columns in the Las Vegas Review-Journal and other papers that carry his column. With this novel approach, he disseminates pearls of wisdom and sound arguments that readers of this book can in turn use in the defense of freedom.

Replying to a correspondent about the liberals’ predisposition to interpret the Second Amendment’s introductory, dependent clause, “a well-regulated militia being necessary to the security of a free state,” as meaning a well-trained national guard, Suprynowicz writes:

“If you want to insist on the relevance of [that clause] — let the BATF explain to me how and where I and my buddies are supposed to go practice our small-unit tactics with M-16s and Squad Automatic Weapons, the better to become a ‘well-regulated militia,’ adept at shooting and killing uniformed mercenaries the next time they send in the tanks on American soil [i.e., Waco]. The answer, of course, is that they’re lying. For us to form militias skilled at resisting federal tyranny or usurpation is the last thing they want.”

The section “We are Here to Take Your Kids” catalogues abuses of Child Protection Services and other government agencies. Even going to a battered women’s shelter can have unexpected ramifications for unwary mothers: not only losing their children by armed, middle-of-the-night raids, but also receiving visits from male workers seeking sexual favors for their “assistance.”

If you don’t believe socialism, collectivism and our increasingly omnipotent government are turning the land of the free and home of the brave into an inchoate police state, read this book. If you suspect that this is already the case, read it and confirm your suspicions!

Other sections deal with the tyranny of taxation; radical environmentalism and the loss of Western lands to the federal government; government schools and the teaching of the new civil religion, the cult of the State (mandatory vaccination is included here); the drug war and the drugging of our children (e.g., the widespread use of Ritalin); the abuses of the regulatory state; and much more.

This is an explosive book that every American who values freedom must read and thoroughly digest — that is, if we are to use Suprynowicz’s “libertarian candle” to light the path for the restoration of our freedom and guide us back to the vision of our Founders.

Miguel A. Faria, Jr., M.D. is Editor Emeritus of the Medical Sentinel; Author of Vandals at the Gates of Medicine (1995); Medical Warrior: Fighting Corporate Socialized Medicine (1997); and his newest book, Cuba in Revolution: Escape From a Lost Paradise (2002).

This article may be cited as: Faria MA. The Ballad of Carl Drega — A Book Review. NewsMax.com, March 11, 2003. Available from: https://haciendapublishing.com/the-ballad-of-carl-drega–a-book-review/.