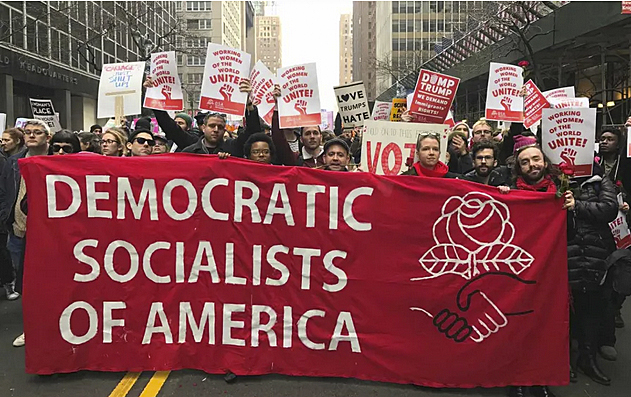 The American Trio of Democratic Socialists by Miguel A. Faria, MD

Tlaib and Omar are the first female Muslims elected to Congress, and they are as confrontational as Alexandria Ocasio-Cortez and just as left-wing.

Facts are no impediment to their dubious social or economic assertions, such as Ocasio-Cortez’s claim that “the world is gonna end in 12 years if we don’t address climate change.” Nevermind we are going through one of the most severe and coldest winters in recorded history! Michigan Representative Tlaib also wants to defund the Immigration and Customs Enforcement (ICE) and end border security, in other words, open borders.

And when the facts are wrong or invented from her fertile socialist imagination, Ocasio-Cortez does not hesitate to lash out at the fact-checkers and claim “bias” toward her, even liberal journalists who idolize her.

Omar, as representative from Minnesota, also immerses herself in inflammatory controversies and makes claims unsustained by reality and unsupported by evidence. For example, according to Omar, Republican Sen. Lindsey Graham must be “compromised” because of his support for the president, suggesting that the influential senator is gay. Senator Graham felt obligated to deny a homosexual orientation.

Tlaib made herself a dubious celebrity “with her profanity-infused call to impeach Trump on her first day in office,” as reported by Fox News. Tlaib, a Palestinian-American, exclaimed at a rally captured in a video, “we’re gonna go in there and we’re gonna impeach the motherf–ker.”

Ocasio-Cortez and Ilhan Omar have called for taxing the rich at rates of 70% to 90% respectively. Perhaps to the trio, we should add the well-known and venerable socialist Senator from Vermont Bernie Sanders and California Senator Kamala Harris, who have also called for increasing taxation and ending private health insurance so as to force Medicare-for-all, socialized medicine.

The trio calls themselves Democratic Socialists. An article in Fox News describes the background for this term:

By limiting private property in such a way that it gradually prepares the way for its transformation into social property, e.g., by progressive taxation, limitation of the right of inheritance in favour of the state, etc.”

By employing workers in national workshops and factories and on national estates.

By educating all children at the expense of the state.

In moments of action,” Engels continued, “the communists will have to come to an understanding with these democratic socialists, and in general to follow as far as possible a common policy with them – provided that these socialists do not enter into the service of the ruling bourgeoisie and attack the communists.

Of course, my childhood experience in communist Cuba helped me to see this trend of America lapsing into socialism years ago as liberty was erroneously equated with socialist equality.

I wonder how much the new American socialist radicals, who have hijacked the Democrat Party since at least 2018, resent the fact that their pusillanimous predecessors (in cahoot with the progressive mainstream media), deceptively chose meaningless blue as their symbolic political color. Had their deceptive Democrat predecessors chosen red, the overt color of revolution, the new democratic socialists would have scored real ideological points. With red as their color, the revolutionary ardor would have been truly representative of their revolutionary socialist ideology and better conveyed to their radical constituencies!

In conclusion, Democratic Socialists are Marxists who would seduce uninformed citizens by demagoguery and deception. Given power they would enforce their policies of wealth redistribution by compulsion and legal plunder. As long as things go their way, they avoid force, but when obstacles are encountered — as history has shown in the USSR, China, Cuba, not to mention Cambodia in the 1970s or Venezuela today — they don’t hesitate to use force and establish a dictatorship of the proletarian. Totalitarianism is eventually needed to preserve the dictatorship and subjugate and desolate the countries in which citizens have been so seduced and deceived.

Miguel A. Faria, M.D., Associate Editor in Chief in socioeconomics, politics, medicine, and world affairs of Surgical Neurology International (SNI). He was appointed and served at the behest of President George W. Bush as member of the Injury Research Grant Review Committee of the Centers for Disease Control and Prevention (CDC), 2002-2005. He is author of Vandals at the Gates of Medicine (1995); Medical Warrior: Fighting Corporate Socialized Medicine (1997); and Cuba in Revolution — Escape From a Lost Paradise (2002). His upcoming book is America, Guns, and Freedom — A Journey Into Politics and the Public Health & Gun Control Movements (2019). His website is https://HaciendaPublishing.com.

This article may be cited as: Faria MA.  The American Trio of Democratic Socialists. HaciendaPublishing.com, February 7, 2019. Available from: https://haciendapublishing.com/the-american-trio-of-democratic-socialists-by-miguel-a-faria-md/