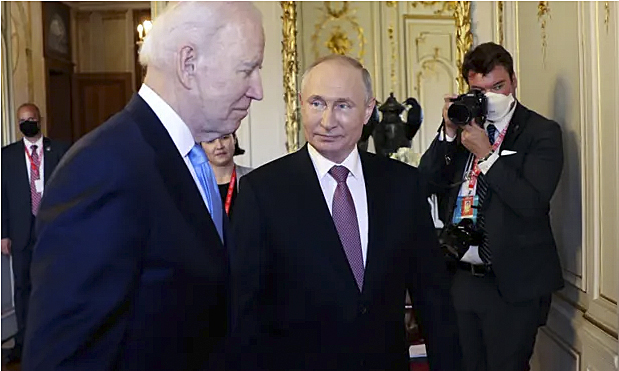 Russia Has Won the War by Cliff Kincaid

I received an email about an Alaskan cruise. You better go before Putin takes Alaska back for Russia. Biden won’t stop him.

Putin has no soul and Biden has no brain. That’s my position. But Biden’s handlers are smart enough to know that they don’t want to offend Putin by supporting the freedom fighters in Ukraine too vigorously. They go through the motions of providing some weapons to some fighters in some areas of the country under direct Russian assault.

But planes and a no-fly-zone, which could turn the tide, are off the table. That means Ukraine can’t win. It’s another no-win war.

Ukraine loses more and more territory to Russia and is now engaged in “negotiations” to end the war on Russia’s terms. This means Ukraine will be neutralized and Russia will dominate Europe. Pope Francis has stepped forward, to provide religious cover for Putin’s victory. That’s what the “negotiations” are all about.

Don’t believe the TV generals who say Putin is losing and is in a “desperate” situation because he has lost several thousand soldiers and key generals. Putin doesn’t care about loss of life. He certainly doesn’t care about Ukrainian losses and refugees.

They just had to wait until they could get Trump out of office for the war to begin. The Russians accomplished that through the use of their phony dossier, provided to Hillary and the Democrats for political purposes.

In a significant development, Pope Francis just discussed the war with Russian Orthodox leader Patriarch Kirill of Moscow. The Vatican said that “the two leaders agreed on the importance of current negotiations to end the war.”

The Vatican’s dealings with Putin and the Russian Orthodox Church deserve major media attention. David Satter, a former Moscow correspondent, says Patriarch Kirill was exposed by material from the Soviet archives as a KGB agent. “This means he was more than just an informer, of whom there were millions in the Soviet Union. He was an active officer of the organization,” wrote Satter.

Despite what you read and hear, James Pindell of the Boston Globe points out most of the world is on Russia’s side. Most nations won’t enforce sanctions. He notes that “…most of three huge continents — Asia, Africa, and South America — are either still working with Russia or trying to project the image of neutrality.”

Even Biden is on Russia’s side, counting on Putin to make possible another Iran nuclear agreement. No wonder Ukraine is losing. They have to lose to make the Iran agreement possible.

Senator Lindsey Graham has called for Vladimir Putin’s assassination.  Biden won’t authorize that because he knows that Putin can strike directly in the heart of Washington, D.C. Biden has enough of a brain to know that his personal survival is at stake if he goes too far. His people can’t even agree to call Putin a war criminal.

In 2016, in one of the most sensational cases, the Russian creator of the propaganda channel, Russia Today (RT), Mikhail Lesin, was found dead in a Washington D.C. hotel room. The speculation was that Lesin was in Washington, D.C. to cooperate with the FBI, and expose corruption and other misdeeds by the Putin regime.

Former FBI agent John Whiteside, who handled Russian espionage cases, told me in an interview that it wouldn’t surprise him if Putin had engineered the death of Lesin. “Putin is a KGB guy through and through,” he noted. Since the evidence implicates the Putin regime in the murder by poisoning of former KGB agent Alexander Litvinenko, Whiteside found it reasonable to assume that he could do the same in America. He said, “Could Putin reach out to the United States? Absolutely. I wouldn’t doubt it for a minute.”

In 2013, as he was preparing his first invasion of Ukraine, Putin visited the Vatican and acted like a religious believer. Putin made the sign of the cross, gave the pope a Virgin Mary icon, and bent over to kiss it. The pope followed suit.

There has been talk of collaboration — even a merger — of the Roman Catholic Church and the Russian Orthodox Church in global affairs. Discussions between these churches are already taking place under the rubric of the Pontifical Council for Promoting Christian Unity.

This is the real danger of a New World Order. It’s a religious New World Order conducted with the collaboration of a Marxist pope and a KGB-controlled Russian Orthodox leader.

To avoid this fate, forget the talk about Biden ordering the assassination of Putin or providing enough weapons to Ukraine to make a difference.

As I argued in a previous column, there is no alternative but to impeach Biden on national security grounds or remove him from office because of cognitive impairment. The war, which is already lost, should not be an excuse for inaction.

This emotional plea reflects his knowledge that Biden’s plan is for the peace of the grave for Ukraine. The country is being sacrificed to please Putin. Zelensky understands Biden has sold out his people.

Forcing Biden out leaves Kamala Harris as president. But the Democrats are so embarrassed by her performance they will likely seek to remove her, too.

Anything is preferable to a brain dead president pretending to lead the Free World.