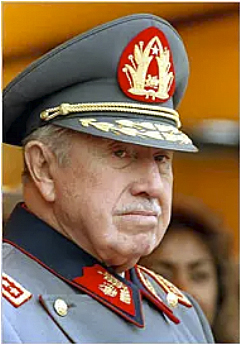 The media’s ecstatic jubilation over the death of General Augusto Pinochet on 12/10/06, including the AP report “Death of Pinochet shakes the nation” by Eduardo Gallardo, does not surprise me. What still amazes me is not only the blatantly biased, one-sided reporting of his “brutal” 17-year rule, but also the lack of sensitivity for those who lived under and supported him, and now mourn his death. The elitism is also apparent: The Chileans, who mourn him, are not only given short shrift, but do not know for a fact that he saved them from communism, but only “believe” he did so!

With great reluctance, this same writer (who also reported and gloated over Pinochet’s travails in England a few years ago) intimates that his government “laid the groundwork for South America’s most stable economy.” The fact is that Pinochet also saved Chile from becoming another Cuba by deposing Socialist President Salvador Allende, who was planning his own communist coup in 1973. Pinochet may have had the secret help of the US, but he openly had the support of the Chilean housewives, who went in the streets of Santiago protesting Allende’s rule banging their pots and pans.

Once in power and after establishing stability and prosperity in Chile, Pinochet held elections, established the rule of law, and eventually handed over the reins of power to democratic rule. This is more than can be said for communist dictator Fidel Castro, who never held elections and still holds power (with his brother Raul) 47 years after the Cuban revolution.

As for statistics, despite media hype, Pinochet’s rule was relatively bloodless, even by the conventional count of 3,197 victims, compared to the cost of communism in the 20th century at 100 million victims (The Black Book of Communism), including the 30,000-40,000 deaths in Cuba’s island prison. (Where is the outrage for Cuban victims?)

Enemies, not to mention the victims, of totalitarian communism, like the great statesman, Margaret Thatcher, have ample reasons to be “greatly saddened by his death.” De mortuis nil nisi bonum.

Dr. Faria is the author of Cuba in Revolution: Escape From a Lost Paradise (2001),

This article may be cited as: Faria MA. Pinochet saved Chile from communism. Macon Telegraph, December 12, 2006. Available from: https://haciendapublishing.com/pinochet-saved-chile-from-communism/.