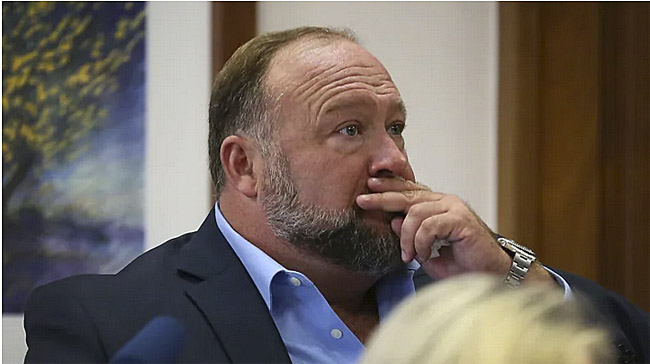 Mass Murder is Not a Hoax by Cliff Kincaid

Stephen K. Bannon and Darren K. Beattie were on “Real America’s Voice” claiming the jury’s $1 billion verdict against Alex Jones is somehow a threat to the First Amendment and free speech. Nonsense. Jones lied about the victims of Sandy Hook and was taken to court for inflicting mental pain and suffering on the families of the victims.

This is not a First Amendment case.

It’s funny how conservatives complain about two standards of justice but in the Jones case they gripe that a jury of ordinary Americans rendered the verdict and then decided upon the damages, stemming from inflicting stress and anguish on the families. That is the way the system is supposed to work.

Are conservatives sympathetic to crime victims or not?

Jones repeatedly claimed the 2012 shooting at Sandy Hook Elementary School in Newtown, Connecticut, which killed 26 people, including 20 children, was a hoax aimed at promoting tougher gun control laws. On this basis, he made money from gullible people who bought his vitamins, thinking they were promoting his “research” into the case.

Why Adam Lanza shot these people is something to be further investigated. Some evidence indicates he was involved in pedophilia.

But Jones did not do serious research. Instead, his claims of a hoax fed the media’s effort to make American conservatives look like morons and paranoid lunatics.

Jones told Bannon, “They’re coming after everybody else.” In fact, he is not a conservative and never has been. Yet the media persist in calling him “right-wing.”

Bannon’s defense of Jones should give pause to those legitimate conservatives who sometimes go on his show. They are making the conservative cause look bad. They are also hurting the Republican Party, which Bannon is associated with.

Jones will go down in history for making some of the most outrageously false claims in the history of American media. They include:

You need to understand what this is all about.

Jones was a regular on Russia Today (RT), the English-language state-owned TV propaganda channel for the Russian government. Russia Today aired a three-part television series about 9/11 being an “inside job,” a claim also made by Jones. The Kremlin propagandists must have been laughing out loud at the thought that some Americans actually believe the U.S. Government engineered an attack on itself on 9/11 and blamed the Muslims.

The Jones film, “The Obama Deception,” featured a former member of the Lyndon LaRouche organization who believes that Karl Marx was a British agent. LaRouche began his career as a Marxist and, like Jones, claimed that the 9/11 terrorist attacks were an “inside job” carried out by U.S. operatives.

Russia Today was eager to publicize Alex Jones and his claims about 9/11, the Bilderbergers, bankers, and various other villains and culprits because they diverted attention from the nature of the communist threat in Russia.

This is not to say that there may be some truth in some of the claims that Jones makes about some of the groups and individuals manipulating U.S. policy. But Jones takes these claims to a ridiculous extreme, in order to create the impression that he somehow has inside information about the government and the forces behind it. That has been the key to his “success.”

Don’t be duped by Jones and his followers. They are not conservatives.

In researching school shootings and the rising crime in America, we need serious efforts to understand the demonic forces responsible for the murder and mayhem.

Consider the fact that Parkland school shooter and pothead Nikolas Cruz was just sentenced to life in prison for the 2018 massacre that killed 17 people. Cruz had told police about extensive drug use, including marijuana, and “demons” in his mind. His mother abused alcohol, cocaine and marijuana.

Personally, I believe he should have received the death penalty. That might be a deterrent of some kind to future such events. But that’s what a jury, brainwashed into believing Cruz was somehow a victim of his upbringing, decided.

A “Review of Cases of Marijuana and Violence” exposed numerous cases of marijuana linked to violence and mass murder. We need these facts before Maryland votes on November 8 to legalize (question #4) the drug state-wide.

Liberals who favor marijuana legalization react to these cases by urging more “gun control” laws, regardless of whether they are effective or not. It’s appropriate and necessary to challenge this claim and look into the motivations behind these tragedies and then impose the right punishment for the crime.

But when Alex Jones reacts, with no basis in fact, by saying that a particular mass shooting was a hoax, leading to harassment of the families of the victims, that’s unacceptable and wrong. He has been ordered to pay, based on the millions of dollars he made exploiting the tragedy. I do not sympathize with him.

What should be done, in general, is highlight the fact that millions of Americans and their families and children are not safe. Featuring Alex Jones as a victim of the justice system, somehow linked to a left-wing conspiracy, is a joke.

Bishop E.W. Jackson is sponsoring a special broadcast, “Stopping the Killing of Children in America’s Cities,” to focus attention on the top 10 cities in child killing since January 2020. “More people must express outrage at the sheer carnage of innocent children that the media overlook while demonizing police,” he says. For example, nine children under the age of 18 were shot dead in Chicago in 2020 between June 20 and July 8.

The father of one victim “asked why there haven’t been protests on behalf of victims like his daughter the way Black Lives Matter has staged events castigating police.”

Indeed, that’s one of the big questions.

But when conservatives embrace the scam artist Alex Jones, they make a mockery of their professed belief in law and order. They undermine their own “conservative” principles and can’t be taken seriously. In fact, they may not be conservatives at all.