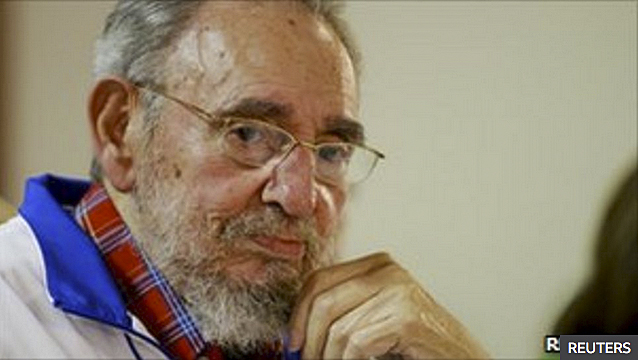 The latest medical reports from Havana assert that Cuban dictator Fidel Castro, who is 80-years-old and has ruled the island for 47 years, will recuperate from his mysterious intestinal illness and return to “public life.” Venezuelan president, and Castro’s sidekick and fawning admirer, Hugo Chavez, likewise affirms that Castro does not have cancer, does not have a terminal disease, and that he will recover, and together they will lead the new Latin American socialist axis of Brazil, Venezuela, Ecuador, and, of course, Cuba. The Venezuelan strongman has just recently twisted the arms of his rubber-stamping Assembly to force it to grant him the power of legislating by personal decree — that is, dictatorial powers — to accelerate the conversion of his oil-rich nation into another socialist paradise a la Cuba.

But the news from Spain’s leading newspaper El Pais regarding the health of the Maximum Leader is not so rosy. While El Pais corroborates that the debilitating illness is not cancer, it does intimate that, had the condition been originally treated elsewhere by competent physicians, a successful outcome could have been attained. Obviously, Cuban surgeons in the socialist workers’ paradise, the best of the best, have botched the tyrant’s medical care.

If socialist medicine cannot treat a readily treatable condition like diverticulitis in a man, or rather a demigod, with access to the best technology, the best medicines, the best surgeons, then what can we really expect of the much-touted free health care of Cuba’s socialized medicine for the average Cuban? As a posted article from Investor’s Business Daily (investor’s.com) reports: “This wouldn’t be so noteworthy if Castro hadn’t spent the past five decades citing Cuban health care as evidence of the superiority of his communist system. Enough U.S. congressmen, academics and left wing activists believed it to prompt Castro to turn Cuba’s medics into political instruments. Tens of thousands of them have been shipped through the hemisphere, and as far away as Pakistan and Indonesia, as his promotional envoys. This helped Castro’s apologists rationalize that while there may be no freedom in Cuba, at least there was free medical care.”(1)

The Cuban dictator has undergone three failed operations for diverticulitis that apparently were botched by Cuban elite surgeons in Havana. Cuba is not releasing any details and rumors floating around Havana by “radio bemba” (lip radio, i.e., Cubans gossiping in the streets) are not reliable. In Cuba, the state of health and medical care of Fidel Castro is a “secreto de estado,” a guarded secret of state.

What we do know is that diverticulitis is usually a benign disease, and treatment for more serious cases, including those requiring surgery, is routine in most developed nations, including those in Latin America. Instead, the Cuban surgeries have worsened Fidel Castro’s condition so that, according to El Pais, he is now seriously ill, unable to eat or drink and receiving only intravenous fluids. Reportedly, peritonitis has set in from leaking anastomoses, and the end may not long be in sight. Fidel Castro may or may not be on his deathbed, but Dr. Jose Luis Garcia Sabrido, Chief of Surgery at the Gregorio Maranon Hospital in Madrid, has been consulted repeatedly. Apparently, it was he who diagnosed the condition and pointed out the messy medical care administered to Castro. The reports beyond that become sketchy.(8,9)

Once again a foreign doctor had to come from a capitalist country to investigate the free health care mess in the workers’ socialist paradise. In 1993, citizens in Cuba experienced suddenly a mysterious epidemic of blindness, afflicting over 26,000 Cubans. Dr. Maurice Victor, an American neurologist, went to Cuba and found that the devastating illness was due to Vitamin B1 (thiamine) deficiency caused by chronic malnutrition. Foreign doctors gave a helping hand and the epidemic was eventually controlled.(2)

And yet, in the case of the personal treatment of Fidel Castro, we should not put all the blame on Cuban doctors and socialized medicine.

Fidel Castro has become a hypochondriac in the last several years, and he orders his physicians and surgeons around as if they were soldiers or personal servants. He lectures them on politics and medicine. He assigns the best doctors to himself and to service in the trailer he hauls around wherever he goes, carrying special food and drink for him and providing for his own personal medical care.

At this juncture, I must confess that the first I heard of the dictator’s intestinal surgery and his turn for the worse, being aware of Fidel Castro’s unbounded vanity and imperious know-it-all, I suspected he had been advised surgical treatment with the standard colostomy, but had refused it, and instead, ordered his surgeons to proceed with an end-to-end anastomosis. As the pieces of the puzzle come together, it appears that scenario indeed may have been the case.

And Castro’s physicians had better do as they are told. In 1927, the eminent Russian neurologist and scientist, 70-year-old Vladimir Bekhterev (1857-1927), who had also been physician to Lenin, was killed by Stalin after the good doctor had the temerity of diagnosing the Russian despot with “grave paranoia,” and not doing what was expected of him!(7) Fidel Castro, we must remember is still an old Stalinist. Cuba and North Korea are the last two unreformed communist states, where autocracy still rules, and the people remain virtually in bondage, despite “free” health care and education!

The death of Fidel Castro may not bring instant freedom to the island prison. The Cuban people will still have to contend with his brother Raúl (5,6), who has been in charge of the military and already heads the government; but knowledge of Castro’s medical care (mis)management may do wonders in debunking the much-touted myth of the wonderful free health care of Cuba’s socialist paradise.(3,4)

This article may be cited as: Faria MA. Fidel Castro’s medical care in the socialized Cuban paradise. Surgical Neurology 2007;67(4):431-432. Available from: https://haciendapublishing.com/fidel-castros-medical-care-in-the-socialized-cuban-paradise.