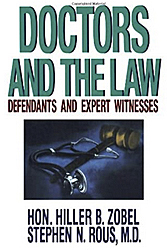 Doctors and the Law by Hon. Hiller B. Zobel and Stephen N. Rous, MD

This book is a thinly-veiled attempt to defend the status quo of litigation-on-demand — “better the devil you know than the one you don’t.” Essentially, it advises physicians to accept the system and conform to the rigors of legal imposition when caught in the net of a medical lawsuit. It defends contingency fees, the system which allows the attorney-litigators to keep as much as 40% of the malpractice award and in the end leaves the injured plaintiffs with only 20-30% of the original award. Contingency billing is something which is unethical for physicians, and erstwhile was frowned upon by the legal profession. Today it is the rule for big-bucks litigation. The book also defends the obfuscation of collateral sources which allows for double and triple-dipping by injured plaintiffs.

Zobel and Rous’ book does not point out the fact that many of the impositions of civil litigation including rampant liability are of recent vintage, beginning in theory in the 1930s and becoming reality in the 1960s, when the legal establishment accepted the flawed concept that widespread litigation was good for society and opened the floodgates of the litigation industry that today is inundating the country.

The authors repeatedly tell us that in civil litigation — which reaches all the way to the courtroom up to the time the jury renders it’s verdict — that 80% of the time, the defendant wins. This figure is highly misleading for two reasons. First, because over 90% of cases are settled and do not reach the courtroom. Second, because of the subtleties of justice, as F. Lee Bailey once proclaimed, “in America an acquittal doesn’t mean you are innocent, it means you beat the rap. My clients lose even when they win.” And even though Bailey was referring to criminal law in his remark, this truism also holds for physicians netted in civil tort cases. Whether physicians settle or fight to the end, or whether patients win or lose, the fact is everyone loses except the attorney-litigators running all the way to the bank.

So often physicians, trying to minimize and contain the damage to themselves and their families, settle malpractice lawsuits, thus avoiding the rigors of a protracted legal battle, and/or the publicity of a trial. The trial attorneys win by default, and this process in turn encourages more lawsuits. In effect, the litigation-lottery game becomes a form of legal extortion in which the doctor is forced to participate. Ailing patients lose because what they need is a physician they can trust and help them regain their health. Instead, they get immersed in a protracted, adversarial legal battle in which their health suffers, and they themselves frequently succumb while waiting for resolution of a conflict that not infrequently goes on for years.

Lastly, Doctors and the Law doesn’t miss an opportunity to defend the legal profession. It fails miserably in its attempt to dismiss as erroneous the unfavorable image of the attorney-litigators in society. For example, they bemoan the unfavorable image in which the legal profession was depicted in the film, The Verdict. Perturbed, they write, “accurate or contrived, the film encapsulates what a large portion of the public believes to be the way lawyers act on behalf of their clients and what some lawyers believe to be the way doctors react to their own professional misplays.” In short, they have failed in their attempt to debunk the conventional wisdom of many who regard the tort system as a legal jungle, many attorney-litigators as ambulance chasers, and medical experts as “hired guns.”