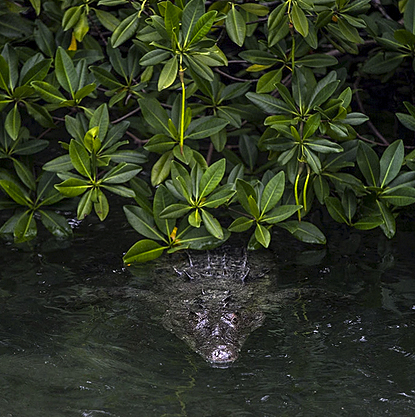 Cuba — (Part II): The Hunter and the Hunted in the Lost Caribbean Paradise

As we pointed out in Part I of this article, in Cuba all natural resources are at the disposal of the Revolution ­ i.e., Fidel Castro and his ruling elites. Cuban ecologists who speak out are quickly silenced, and so national treasures like the tropical forests of the Ciénaga de Zapata, the marshland areas adjacent to the Bay of Pigs, are being destroyed, and with them, their exotic flora and fauna. Campesinos spent more time capturing young parrots (Amazona leucocephala) to sell to the Russians before they left and collecting mollusks for foreign collections than working in the unproductive farm cooperatives.

In “Natumaleza Cubana,” author Carlos Wotzkow estimates from his own studies in the region that 50 percent of the Ciénaga de Zapata ecosystem has already been destroyed and lost in the wanton environmental degradation and ecologic destruction. (1)

Likewise, the “Plan Turquino,” the much-touted government plan that employed young soldiers in agriculture and the tending of cattle has been an utter disaster. These “production zones” have brought desolation to once productive land. Cattle have destroyed rice fields and other crops, and although the government boasts about the number of cattle in the country, the Cuban people wonder where the meat, milk and other dairy products have gone.

As in George Orwell’s “1984,” the people listen unquestioningly to the announced production figures, but no one believes them. In fact, only children younger than age 7 and the elderly are allowed to buy milk with their ration cards, and meat rations remain meager.

In 1995, one of Wotzkow’s colleagues visiting a farm wondered why the cows and even the bulls were missing tails. Was this a congenital disease? No, the campesinos (peasants) were going out at night and slicing the tails off the animals to feed their families. Out of necessity a new dish had appeared ­”flaming tails.”

Many examples can be cited of the ongoing environmental destruction throughout the island. Another devastated area is the La Laguna de Ariguanabo, a once beautiful lagoon that from time immemorial served as a natural habitat for migratory birds as well as predatory hawks, the Falco peregrinus. The lagoon has been drained and the nearby primal Ceíba forests, the Ceíba de la Cangrejera (Ceiba pentandrata), cut down and erased out of the geographic annals, turned into a bullfrog (Rana catesbiana) breeding farm for consumption in the tourist industry (i.e., the ancas de rana dish).

Wotzkow does not neglect to discuss what he terms “the militarization of the sciences” and the development of the Frente Biologico for potential biological war against the United States with the use of migratory birds.

We have discussed the issue of the Cuban potential for bioterrorism and her bioweapons program. (2-5) Suffice to say that, unaware of the Frente Biologico’s agenda and accepting Castro’s “peaceful, scientific” intentions, many American institutions have given logistic, scientific and financial support to the Cuban regime for the study of bird migration. Wotzkow mentions specifically the Smithsonian Institution, the University of Pennsylvania and several private individuals.

Incredibly, even the U.S. government provided Cuba with materials in the 1980s that could potentially be used in her biological warfare program. This is substantiated by the research of Professor Manuel Cereijo of Florida International University, who found that the CDC provided Cuban scientists with the St. Louis encephalitis virus, a dangerous arbovirus in the same family as the West Nile virus but which carries a much higher mortality (up to 20 percent). In a series of recent articles, NewsMax.com has reported, and the CDC has confirmed, that many dangerous viral and bacterial specimens were shipped to a variety of nations, including Iraq and Cuba.

Most perplexing and reflective of the dire circumstances existing in Cuba today, relating to both environmental and economic deterioration, is the unknown grisly story of Havana’s National Zoological Park. The park has been run under the direction of the local chieftain (“Cacique”) Abelardo Moreno Bonilla, who was known as “the tiger” because he would steal the meat allocated to the felines! The meat would be consumed by the chieftain’s family and friends. Eventually, the tigers themselves were sacrificed, and the meat sold to tourists for $8.00 a steak!

Revelations reveal more ghastly nightly occurrences at the zoo, stories that could serve as the plot for B-rated horror movies. The partially devoured bodies of Havana students have been found in the park, consumed by the hungry felines. It turned out the students were hunting the tigers and leopards for food, but, unfortunately, sometimes the tables were turned in the battle for survival, and the students became the hunted instead of the hunters. On one night, a man’s body was discovered. He had apparently been kicked to death by the African ostrich he had been pursuing for food!

The hunting of man or beast brings me one way or the other to another item that I wanted to discuss from Wotzkow’s magnum opus, “Natumaleza Cubana.” (Unfortunately, I cannot cover every important environmental issue discussed in this book.)

While ordinary Cubans have been disarmed because the Maximum Leader doesn’t trust his civilian population with firearms, those who are more equal than others living in this Orwellian Caribbean farm can fish and hunt everything that swims, crawls or flies in the hapless island. Here I am not deriding the poor Cuban campesino who uses an air gun, antiquated single-shot escopeta (“shotgun”), 22-caliber rifle or any other illicit firearm that he may be able to get his hands on, to hunt in order to feed his family in the Parque de Cristal in the old Oriente province or in the historic Sierra del Escambray in Las Villas, near my native city of Sancti Spiritus.

They have to survive, even if they have to risk imprisonment or their lives for hunting in forbidden land. Some have been shot for hunting cattle in the latifundia, run by the biggest landowner in Cuba, the eldest Castro brother, Ramón, or for hunting the transplanted white-tailed deer belonging to the mayimbe hunting reserve under the administration of the chieftain, Comandante Guillermo García Frías. This injustice reveals that Fidel Castro and his minions are more akin to King John and the Sheriff of Nottingham than to Robin Hood and his band of illicit hunters in Sherwood Forest.

Hunting by members of the privileged mayimbe class and the upper echelon of Cuba’s military society is a large and lucrative sport, which is sometimes extended to VIP tourists with hard cash. Thousands of birds are shot each year by the Cuban nomenklatura and their guests. Prime targets are the doves (Zenaida sp.) and ducks that stop during their migration in the marshes of El Jíbaro near Sancti Spiritus, the same area my father and I traversed during our 1966 escape from Cuba. (6)

But, because hunting by the privileged parties involved is unregulated and exploited to the hilt without attention to the environment and natural habitats, many native Cuban species of birds are nearing extinction, including the lechuza, the Cuban owl (Tyto alba); the various hawks and birds of prey, buhos, gavilanes (Buteo platypterus) and cernícolos (Falco sparverius), and even the Cuban parrots, the cotorras (Amazona leucocephala).

With the lack of foliage and destruction of habitats, and the birds having nowhere to hide, the mayimbe hunter has reason to smile as he thinks of the Revolutionary hunters’ slogan: “Birds that escape in the night will fall in the morning.”

Birds and other fauna that aren’t shot or trapped, or their young captured in their nests, are sold and exported by State-run agencies for hard cash, the ill-conceived policy justified by the Cuban bureaucrats (of course with the consent of the Maximum Leader).

The fauna of Cuba’s once wondrous system of caves have not been spared. In Pinar del Rio, Matanzas and Oriente provinces, the extensive system of caverns and its interesting and diverse fauna, including bats and fish, has been destroyed by the military. The caves have been used extensively, without consideration of the fragile interrelated ecological systems, to store tanks, cannons, trucks and other heavy ordnance, so that only the usual hardy survivors remain: cockroaches (Periplaneta Americana), rats (Rattus sp. ) and mice (Mus musculus).

In short and suffice to say, as Wotzkow reveals in “Natumaleza Cubana,” the triumph of the Revolution in 1959 has brought nothing but environmental degradation, deforestation, pollution, the loss of flora and fauna, and habitat destruction, without any economic benefit to the nation and the hapless Cuban people. Through four decades of destruction, the environmental community and the international press have remained silent. The long silence remains deafening. And yet the devastation of a once beautiful and prosperous island has brought the Caribbean nation to the edge of an environmental and ecological apocalypse!

Miguel A. Faria Jr., M.D., is Editor-in-Chief of the Medical Sentinel (www.haciendapub.com) and author of “Vandals at the Gates of Medicine” (1995); “Medical Warrior: Fighting Corporate Socialized Medicine” (1997); and for the lesson of gun control in Cuba, see his latest book, “Cuba in Revolution: Escape From a Lost Paradise” (2002). All three books are available from https://HaciendaPublishing.com.

This article may be cited as: Faria MA. Cuba — (Part II): The Hunter and the Hunted in the Lost Caribbean Paradise. HaciendaPublishing.com, February 11, 2012. Available from: https://haciendapublishing.com/cuba-part-ii-the-hunter-and-the-hunted-in-the-lost-caribbean-paradise/

Originally published in NewsMax.com on November 10, 2002. It has been updated with photos for Hacienda Publishing.