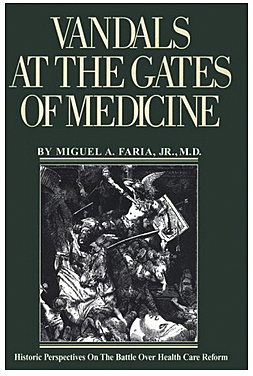 Book Review of Vandals at the Gates of Medicine: Historic Perspectives on the Battle Over Health Care Reform. Reviewed by Jane M. Orient, MD

According to an old Cuban proverb, “Camarón que se duerme, se lo lleva la corriente” (shrimp that sleep are swept away by the current). Some physicians may find Dr. Faria’s wake-up call as welcome as a blast of Arctic wind. In his view, the current policy of most medical organizations — “nonconfrontation and cooperation” — could make them, in effect, accomplices of the barbarians.

From Faria’s historic perspective, the currents that some consider the wave of the future are as old as the Code of Hammurabi. Because of the threat of severe government reprisals, the most knowledgeable physicians in the civilized world at that time recommended against treating patients — the ultimate “defensive medicine.”

As an example of a leader who forestalled imminent collapse in a time of crisis, Faria points to Diocletian. Although he subdued military enemies and reestablished law and order, his domestic “reforms” accelerated the corrosion of the foundations of the Roman Republic. Diocletian abrogated codified laws and installed an overbearing centralized government that overrode the rights of citizens and local governors. The specific remedies are familiar: wage and price controls, subsidies, collectivized unemployment and other social benefits, heavy taxation, regimentation (“regulation”) of every aspect of life, and a kind of national service under which workers were bound to their jobs in perpetuity.

Faria warns against “technocrats in the self-procreating bureaucracies” and others seeking to rationalize further government intervention as a vehicle to achieve their desired objectives. He cautions that despite “diversity” and “multiculturalism” we seem inexorably headed for enforced conformity to the consensus of a ruling elite. He advises us to be wary of the Machiavellian craft of divide et impera (divide and conquer), which may work by fomenting class warfare or redistributing benefits to those who are “more equal” in the Orwellian sense.

Faria advocates a restoration of American constitutional principles, free market incentives, and the sacrosanct patient-doctor relationship. In fighting for the integrity of their profession, physicians should neither apologize for their success nor bow to pressures for “pseudoaltruism.” Faria argues for Aristotelian moderation: virtue-based, true compassion accompanied by rational self-interest.

Faria explains the crucial distinction between a republic and a social democracy. In a republic, the most important office is that of private citizen, and both people and rulers must obey the same laws. In contrast, a social democracy is always ruled by a politically favored elite. Faria points to his native Cuba as a showcase for the ultimate results (which are far different from those sometimes portrayed in the medical literature). He also describes the ethical transformation that has occurred in “soft-Left” social democracies, to the detriment of patients.

Even for those who may find the basic message repugnant, this book contains a wealth of historical tidbits: the origin of barber-surgeons; the role of Paracelsus in placing medicine and surgery on an equal footing; and the effects of the Plague of Justinian. An extensive bibliography and a good index enhance its usefulness as a reference.

This book should be prescribed reading. (Those who are short of time or impatient with historic detail should start with chapter 11, “The Legacy of Republican Government.”) Those who disagree with Faria’s conclusions should refute him. Spirited debate should be encouraged; the dishonorable course is to sit on the sidelines.

Like John Philpot Curran, Faria believes that those who are blessed with liberty are obligated to keep eternal vigilance. If they shirk their duty, “servitude is at once the consequence of [their] crime and the punishment of [their] guilt.” The book describes those consequences in graphic detail.