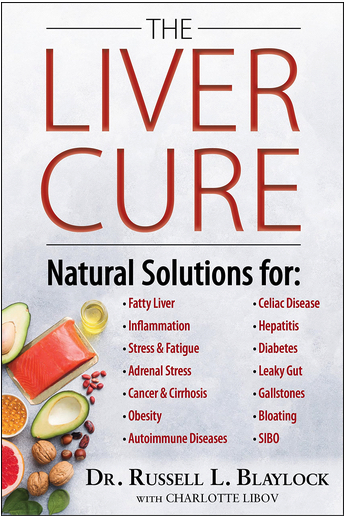 Dr. Russell Blaylock, who retired from active neurosurgical practice to devote his time to researching the effects of diet on disease and now directs Theoretical Neuroscience Research in Mississippi, gives us another bunch of goodies, packed twice over in one book. This time he takes a deeper look at the liver, and with each chapter we learn not only the role of the liver in normal physiological states but also states of disease. If you follow Dr. Blaylock’s advice, and you are in good general health, there are many tips you can take from him to increase liver health, resulting in an even greater well-being. Unfortunately, as we age, we are subject to many benign (and some not so benign) conditions that can also be (at least) partially remedied by a focus on maximizing liver potential. Dr. Blaylock never says to his readers that they should abandon conventional medical and surgical treatments. As an excellent physician and surgeon trained in the practice of Western medicine, it is doubtful he would ever believe that. Instead, he believes that proper diet can work in synergy with traditional medicine and surgery to produce much better outcomes than either the former or latter two could achieve alone.

Dr. Blaylock notes that the liver works almost nonstop in nutrient metabolism and storage, somatic detoxification, somatic immunity and blood, cholesterol, and bile production. The liver even shares some endocrine-like roles as well as vitamin production, glycogen production from glucose, and production of most other plasma proteins found in the blood.  Sixty-five percent of the liver is composed of hepatocytes, and these cells are responsible for nutrient processing plus detoxification. Given their number and function, one can see why they are of greatest concern to both patient and physician out of all the liver cells, because they are most affected by general lifestyle (including eating and use of “recreational” substances, both legal and illegal).

The book addresses the hepatocytes and detoxification first, after general overview of the liver, but other cells, such as the stellate and Kupffer, are also minor chapter topics, where he relates them to the pathophysiology of SIBO (small intestinal overgrowth syndrome). Here, a leaky gut ends up throwing its microbiome into the bloodstream, as it no longer possesses the tight junctions between enterocytes needed to hold them. The stellate and Kupffer cells are activated by the misplaced flora, and release cytokines, but cytokines often end up hurting the very tissues they are deployed to protect, and in this case damage to the hepatocytes may result. Dr. Blaylock also mentions the role of the liver in modulating SIBO, which usually means that there is an increase in the number of organisms in the small bowel, and the continued excitation of hepatic cytokine production may lead to several serious liver diseases, including hepatocellular carcinoma. Other liver disease inducing agents, such as alcohol and fat, will speed up the liver disease process originating from leaky small gut.

I didn’t find mention of the hepatic sinusoidal endothelial cells, which regulate, survey, and remove other cells and molecules on their way to the hepatic parenchyma from the blood. This is a relatively new area of pathophysiologic research, and may not have much clinical yield yet, so my assumption is Dr. Blaylock might not have studied these cells in depth yet for this reason.

Reading other reviews of The Liver Cure written by people purchasing it through Amazon, I see that when a non-physician and non-biological scientist attempts to read this book, they sometimes think it is the type of book to be read cover to cover. It is not, and that probably explains the several poor reviews among a sea of excellent ones. One should read the introductory chapter on liver anatomy, function, and pharmacology, and probably the chapter on detoxification, both in health and disease. Those are chapters one and two. Beyond those chapters, three through eight are highly recommended because they cover the genetic aspect of liver disease, symptoms of liver illness, the impact of the general American diet on liver health, the type of lifestyle one leads and how it puts the liver at risk for disease, and specific food additives (such as artificial sweetener) and other chemicals that should be avoided to maintain a healthy liver. I think these are enough for the average person to read if they have no specific health issue they need to address. If they do, or suspect they might, they’d better consult their gastroenterologist first, but after that, and then reading chapters 1-8, it is best for them to skip directly to the appropriate chapter that best describes the pathology they are dealing with.

Dr. Blaylock has provided the general public with an excellent resource and handbook of supplementary treatments for liver health and liver disease, which he has researched well, and satisfies his readers that his recommendations are on a scientific basis. He covers the pathological states only in as much detail as he needs to, to give his readers some understanding and extra relief their physicians might not have provided. He is a terrific teacher, and I know because even with a relatively mild weight gain of 30 pounds due to stress and gallbladder disease, the CT shows fat has already infiltrated my liver. My internist is not worried; she just says to lose the weight. I am losing it, but because my blood shows no elevation of the common liver enzymes found with liver pathology it is not NASH (nonalcoholic steato-hepatitis), according to Dr. Blaylock. I’m glad and can partially credit Dr. Blaylock’s suggestion to take probiotics as the reason for no associated inflammation.

This article may be cited as: Bogart, AR. Book Review: The Liver Cure by Russell L. Blaylock, MD. HaciendaPublishing.com, August 26, 2022. Available from: https://haciendapublishing.com/book-review-the-liver-cure-by-russell-l-blaylock-md/.