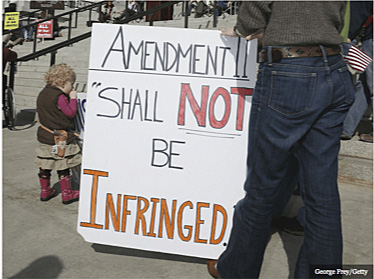 America, Guns, and Freedom examines the dangers posed by gun control doctors and researchers who seek to push gun control under the guise of “public health.”

Author Miguel A. Faria, Jr., MD, a neurosurgeon by practice, has keen insight into the dangers facing freedom when those intent on restricting the Second Amendment do so under the banners of safety and healthcare, while enjoying deep financial backing.

Faria’s position is also informed by the fact he was once the editor of the Journal of the Medical Association of Georgia. He now uses his trained eye to parse medical journals and healthcare think tanks, warning freedom loving Americans of the dangers posed by doctors, especially large groups of doctors, who share a passion for gun control.

For example, he discusses how the American Academy of Pediatrics (APA)—not exactly a group one might otherwise associate with gun control—was part of a “coalition” allegedly seeking “a variety of patient privacy-invading measures [in the early 21st century] in the name of gun safety.” In another part of the book he stresses how certain “public health” hold to their biases to the point of skewing what their discoveries in favor of gun control. He does this by examining the pro-gun control findings of a 2002 study published in the Harvard School of Public Health’s Journal of Trauma. Faria wrote:

Public health researchers ignored the beneficial aspects of gun ownership and concentrated only in obtaining supporting evidence for their long-known thesis that firearm availability is responsible for violence in our society.

He also looks at a 2017 study published in Pediatrics, which included teenagers as old as 17 years in reporting 1,300 gun-related deaths of “children.” When Faria got into the numbers he saw, “78 percent of the deaths occurred among 13 to 17 year olds; 53 percent were homicides and 38 percent were suicides. Less than 12 percent were accidents involving children 12 or younger.”

In other words, the bulk of the homicides involved teenagers who were prime age for gang-related activity and street crime, while the actual group on which the study was ubiquitously focused—children—constituted only a small percentage of the deaths.

Faria also uses America, Guns, and Freedom, to highlight the life-saving benefits of private gun ownership and concealed carry. He bolsters his examination of these things with the same enthusiasm that he showed in bolstering claims of bias and danger in “public health” gun control push.

America, Guns, and Freedom is a great read for anyone who wants to understand the myriad threats aligned against the right to keep and bear arms in the 21st century.

AWR Hawkins is an award-winning Second Amendment columnist for Breitbart News and the writer/curator of Down Range with AWR Hawkins, a weekly newsletter focused on all things Second Amendment, also for Breitbart News. He is the political analyst for Armed American Radio. Follow him on Twitter: @AWRHawkins or on Instagram @awr_hawkins. Reach him directly at awrhawkins@breitbart.com. Sign up to get Down Range at breitbart.com/downrange.

This review was originally published at Breitbart.com on October 10, 2019. It is posted here for the enjoyment of readers at HaciendaPublishing.com. The photo used to illustrate the article also appeared in the original book review posted on Breitbart.com.