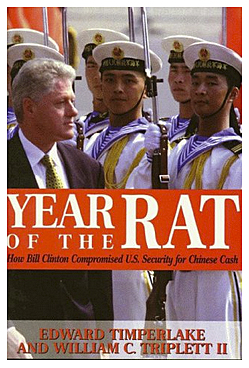 Something is rotten in Washington’s corridors of power. And we aren’t talking about lying about sultry sex (and alleged private matters that may or may not be high crimes and misdemeanors), but corruption in the highest circles of our government — the Departments of Navy, Justice, Defense, Commerce, culminating with bribery and potential treason involving the President and Vice President of the United States.

In their new book, Year of the Rat, national security experts, Edward Timperlake and William C. Triplett, II, outline in graphic detail the selling of U.S. innermost national security secrets to a hostile foreign power, Red China, for illegal and treasonous campaign contributions. Consider this is tainted blood money from the butchers of Tiananmen Square where upwards of 3,000 to 4,000 students were killed in cold blood. The implications of the Clinton-Gore administration welcoming those responsible to Washington, D.C. with 19-gun salutes does not pass unnoticed by the authors. Clinton-Gore would do anything for money to gain power in 1992 and retain power in 1996. Chinese spy John Huang working for Lippo moguls Mochtar and James Riady (also Chinese intelligence agents) played pivotal roles as did Arkansas triad member Charlie Trie and Macau criminal syndicate and prostitute ringleaders Ng Lapseng and Ted Sioeng.

We learn about intriguing (and determined) women, four Asian (all Chinese or of Chinese decent) who also had what could be characterized as “improper relations” with the President (and Vice President), only this time the relations were not sexual but treasonous. One of the women, princeling Lt. Col. Liu Chaoying, a PLA intelligence agent, insisted on and met Bill Clinton, placed money in the Democratic coffers, and thereafter (helped by the President’s lobbying) obtained concessions for COSCO in the leasing of the naval base at Long Beach, California.

Most egregiously, while Clinton was preaching draconian gun control for law-abiding American citizens, he was entertaining Chinese gun runners, like Wang Jun of the Red Chinese firm Polytechnologies, with White House coffees and a Democratic National Committee (DNC) fund raising event. Mr. Wang himself (now indicted) manned COSCO’s ship the Empress Phoenix, which was intercepted by U.S. Customs bringing to the port of Oakland, California 2,000 automatic weapons destined for Los Angeles gangs! Undaunted, in May 1998, Clinton approved the launching of a satellite by Lockheed Martin and a Red Chinese firm in a joint venture with Polytechnologies.

But not all of the characters in this nefarious story are communist Chinese, but American capitalists who placed corporate profits ahead of America’s national interest, and so the businesses they headed donated millions of dollars to the DNC to help the Democrats regain Congress in the 1996 and 1998 elections. In return, the Clinton-Gore team signed waivers allowing these companies to transfer our most sensitive satellite (i.e., missile launching) technology to Red China, obliterating the safety margin and technological edge we previously had on our sworn and potential enemies. (China then transferred sensitive U.S. technology to Pakistan, Iran, and North Korea.) As a result, according to American intelligence and the Cox Report, China now has 20 reliable ICBMs targeted at U.S. cities and although not à la par with the U.S., China poses a serious threat to our national security. In fact, during the 1996 Taiwan Strait crisis in which China attempted to intimidate Taiwan and the U.S. sent its 7th Fleet to discourage a communist invasion, a leading Chinese general threatened to nuke Los Angeles adding, with great assurance, that the U.S. would not endanger Los Angeles to defend Taiwan.

We now live in a more dangerous world and the people who have endangered the lives of Americans are still leading this nation! It’s beyond human understanding. Given what we now know, President Clinton was lying when in April 1996 he stated: “For the first time since the dawn of the nuclear age, there is not a single solitary nuclear missile pointed at an American child tonight. Not one. Not a single one.”

The selling out of our national security secrets to the Red Chinese, as thoroughly documented in this book, is such a dastardly presidential deed as to defy comprehension by ordinary Americans. These acts are so inimical and evil that their disbelief provides the greatest cover to those involved. After all, who wants to believe that bribery and treason in the very pinnacle of our republic might just be true — particularly in this great era of national prosperity?

In an exclusive interview with newsletter editor David Bossie, Rep. Dan Burton (R-IN), Chairman of the House Committee on Government Reform and Oversight, corroborates: “We had 79 people involved in fund-raising for the Democratic party take the Fifth to avoid incriminating themselves. And there are another 23 witnesses, like James Riady of the Lippo Group and Liu Chaoying of China Aerospace, who live in other countries and we have been unable to interview them. I have asked FBI director Freeh if he had ever been involved in any investigation in which so many witnesses took the Fifth or fled. He said the only time he remembered such a situation was during an investigation of organized crime in New York.”

The recent revelations coming out of the Cox Committee (one third of which was censored by the administration as deemed “too sensitive” for public consumption) reveals the frightening extent of Red Chinese espionage and the loss of our most sensitive nuclear secrets. Just recently, in fact, the Red Chinese announced they had built a neutron bomb (which, along with multiple nuclear warhead technology, we now know was part of their stolen espionage loot).

Can we believe the president when he holds his arm to his chest, looks us directly in the eye, and pleads as he did on March 19 of this year: “I can tell you that there is no espionage at the [nuclear weapons] lab since I have been president, no one has reported to me that they suspect such a thing has occurred?”

Truth is indeed stranger than fiction — and more frightening too!

Miguel A. Faria, Jr., MD is Editor-in-Chief of the Medical Sentinel.

This article may be cited as: Faria MA. Year of the Rat: How Bill Clinton Compromised U.S. Security for Chinese Cash by Edward Timperlake and William C. Triplett, II. HaciendaPublishing.com, September 1, 1999. Available from: https://haciendapublishing.com/year-of-the-rat-how-bill-clinton-compromised-u-s-security-for-chinese-cash-by-edward-timperlake-and-william-c-triplett-ii/.