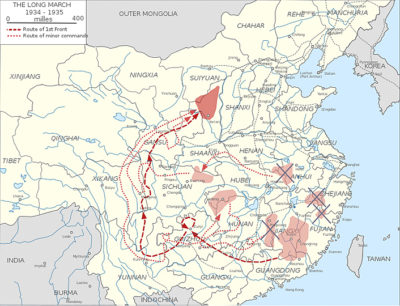 Sun Shuyan, author of The Long March: The True History of Communist China’s Founding Myth, was born in the 1960s, reared and schooled in communist China, as well as at Oxford, England, where she won a scholarship. Sun Shuyun is now a documentary filmmaker who “for the last decade divided her time between London and Beijing.” This short biographical vignette of the author is essential because it parallels her “divided,” and seemingly ambivalent, views on Mao and his legacy — viz-a-viz, the People’s Republic of China (PRC). Sun Shuyun’s father was a hard-line communist who bitterly resented the more moderate course China took in recent years, and upon his death was cremated in his Mao uniform with his medals. The author herself seems to have, as of yet, not completely broken and freed herself totally from her communist childhood indoctrination. Criticism of Mao and China’s communist history is obliquely alluded to and only indirectly uttered from the mouths of some of the elderly survivors of the Long March who she interviews.

The book is “dedicated to the men and women of the Long March,” and appropriately so, as Shuyun relies on the historic and personal accounts related to her by the several survivors who participated in the Long March as teenagers, and who were incredibly still alive at the time of the writing of the book, settled along the districts the Long March followed between 1934-1936. These octogenarian and nonagenarian survivors were not forgotten, but for the most part were abused and persecuted before and during the Cultural Revolution by the Red Guards, treated as pariahs, deserters, even traitors, by the PRC they help found. It is only recently these veterans have been rehabilitated, acknowledged as loyal Red Army men and women, and given pensions as participants in the Long March. Their tales are heartrending and not always flattering to Mao and the communist government he ushered in 1949. Nevertheless, for the most part despite their travails and persecutions, these veterans are still faithful to the Revolution and proud of their role in the Long March.

Connoisseurs of Chinese communist history in general and the Long March in particular will be struck by at least two salient aspects of this book. One is the disclosure of the mysterious course and heretofore untold story of the ghastly fate (forbidden communist history) of the 20,000-strong 4th Army of General Chang Kuo-t’ao (or Zhang Guotao), the twice betrayed Western Legion. The truth is the Red Army men and women of the Western Legion were deliberately ordered by Mao to march to their deaths to be massacred by the formidable cavalry of the Muslim army of the Mas (tribesmen allied to Chiang Kai-shek) operating in the remote and barren province of Gansu in northwestern China. The second aspect of Sun Shuyun’s book, based on the true accounts of Long March survivors, pertains to how much it is in accord with the authoritative biography Mao: The Unknown Story by Jung Chang and Jon Halliday, which I have reviewed elsewhere. Chang and Halliday blame the lost of the 4th Army, the “Legion of Death,” to Mao’s deliberate machinations and political plotting against his rival, General Chang Kuo-t’ao. Sun Shuyun’s survivor accounts all but confirm the conclusions drawn by Chang and Halliday, without actually making definitive statements about the fact. In short, in this and in many other mysteries of the Long March, Sun Shuyun’s book confirms the research findings of the much more comprehensive tome, Mao: The Unknown Story published only a year earlier in 2005.

Here is another example: Sun Shuyun’s book confirms Mao and the communists lost support of the people and even Party leaders after the political intrigues and bloody purges that followed in the wake of the Futian incident, when 20,000 Party functionaries were denounced, purged, and summarily executed on Mao’s orders, as “enemies of the people” and “Nationalist spies,” purportedly members of the non-existent Anti-Bolshevik (AB) faction within the Party. Three old men intriguingly told Shuyun, “the water began to flow upstream” (p. 61), meaning hundreds of thousands of people fled from Mao’s Jiangxi Red base, fearful for their lives and escaping the desolation. That is why Mao was marginalized and lost power forcing the Party to plan the Long March to flee the Nationalists. It was Mao’s barbarity and disastrous policies that turned Chiang Kai-shek’s 5th Campaign into a Nationalist victory and forced the Red Army to abandon their Soviet base in Jiangxi, fleeing in the rout the Long March really was. The people of the Red Jiangxi Soviet had lost faith in the communists, as purges and mass killings took place, resources were squandered, and Chiang Kai-shek was given an excellent opportunity to begin and embark on his 5th Campaign that forced the communists to leave Jiangxi in the massive retreat, which Mao and his propagandists only later turned into the “victorious” and “epic” Long March.

This is one of many revelations that has come to light debunking the official histories of the Chinese Communist Party archives and various heroic myths forced upon PRC historians, lionizing Mao and bolstering the image of the Chairman as the infallible leader of Chinese communism. Here again, Sun Shuyun’s own research and the account of survivors is in perfect accord with the previous revelations disclosed by Chang and Halliday in their masterful biography. And yet all mistakes cannot be blamed on Mao. Just before setting on the Long March, the Party ordered its own purge to cleanse the Red Army on the March and ensure the loyalty of those left behind in the Jiangxi Soviet. Thousands were executed. Sun Shuyun admits, “Twenty years of communist upbringing had left their stamp on me, when all I was told, heard, and read was the good things the Party did.” General He Long’s 2nd Army, just before embarking on its own long march, exterminated most of its own soldiers, so that from 1932 to 1934 its number dropped from 30,000 to 3,000! (p. 84).

In conclusion, Sun Shuyun’s book, based on accounts of actual Long March survivors as well as Party documents and published memoirs, confirms many of the assertions made by Chang and Halliday, assertions that were discounted by many of Mao apologists in Western academia: Bloody purges, forced conscription of children into the Red Army, mass desertions by soldiers, mythic epic battles (such as Luding Bridge), hostage-taking (particularly women, children, and old people), executions of those whose family could not pay ransom, the non-existent treason telegram of General Chang Kuo-t’ao, Mao’s culpability in the fate of the Western Legion, etc., etc. Although the author, Sun Shuyun, has not completely come to terms with the whole tragedy of communist horror in China, she has been an honest and truthful historian and her book is a welcomed addition to history, augmenting our knowledge of the Long March, adding a fresh perspective, and helping demolish, if piecemeal, the mythology surrounding Chairman Mao, while exposing, unwittingly, the true savagery and real tragedy of Chinese communism.

This article may be cited as: Faria MA. The Long March (1934-1936) and the forgotten saga of the Western Legion of the 4th Army — as recounted by survivors. HaciendaPublishing.com, March 28, 2014. Available from: https://haciendapublishing.com/the-long-march-1934-1936-and-the-forgotten-saga-of-the-western-legion-of-the-4th-army-as-recounted-by-survivors/

The photographs used to illustrate this commentary came from a variety of sources and do not necessarily appear in Shuyun’s The Long March: The True History of Communist China’s Founding Myth.