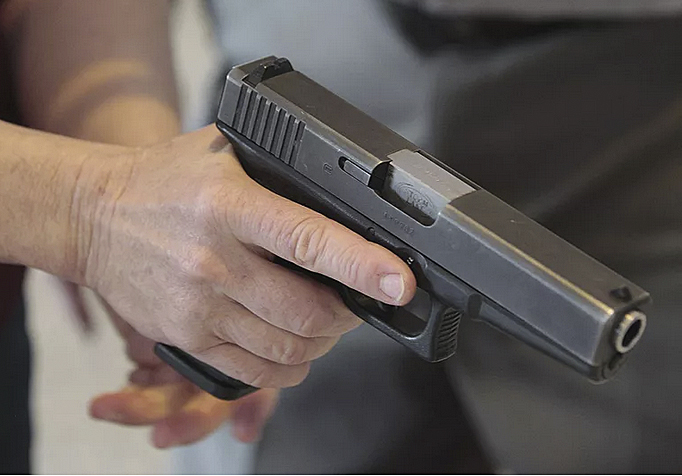 Tales of Human Survival with Firearms by Miguel A. Faria, MD

Guns and Self-Defense: 23 inspirational true crime stories of survival with firearms (2019) by Robert A. and Sims Waters appropriately begins with a quotation from a Washington Post writer expressing the erroneous view and, at the same time, contempt that elitist liberal journalists hold for the average American, and for any citizen who dares to conceive the idea of protecting his or her home and family with a firearm. Reading this fascinating book, the reader soon learns how mistaken the arrogant intelligentsia is holding to such misinformed and thoroughly hoplophobic views.

In their most recent book, the authors recount “23 inspirational true crime stories of survival with firearms.”  And once again, the reader won’t be disappointed. Highly entertaining, these thrilling stories provide lessons in sociology and survival:

1. Convenience store work is inherently dangerous, second only to cab drivers, and especially so for clerks working at night. Yet most chain convenience store businesses forbid employees to carry weapons, making them sitting ducks for robbers and other dangerous criminals. This is testified to by two dramatic cases, one in Toledo, Ohio; another one in Naples, Florida.

2. Carjackings can be deadly and a determined citizen can play a pivotal role, even if not intended to do so. In one case, a valiant and determined nurse defended herself with a firearm and “single handedly” stopped a vicious carjacking ring in Milwaukee, Wisconsin.

3. Armed citizens have assisted cops who are in danger by coming to their aid during life or death situations,  as in two cases: One case in the Arizona desert, and another near Ocala, Florida.

4. Many of those cases also illustrate the axiom that criminals prefer to prey on the elderly and the more vulnerable in society — even the blind and paralytic confined to wheelchairs. They deem these individuals weaker and less likely or incapable of mounting any defense. In several cases, feisty senior citizens successfully defended themselves with firearms against much stronger, younger, and even armed assailants. To illustrate that point, the authors relate a case that occurred in an Internet Café on the outskirts of Ocala, Florida. In another case a Macon, Georgia, grandmother found herself  “ducking bullets and throwing lead,” as she described it. And a couple who fought back put an end to the “Cutthroat Committee,”  a criminal gang of felons operating in the Jacksonville, Florida area.

5. Poorly treated or unrecognized mental illness is a contributing factor in many cases of assault and battery.  Unwary citizens may suddenly be forced to defend themselves, and the firearm remains the only tool that can reliably be used to protect oneself from such deranged madmen — disturbed individuals that have fallen through the cracks of society and the mental health system has failed to institutionalize and treat effectively. In one such case in Pocatello, Idaho, a deranged madman violently attacks his neighbors with a machete.

6. Other cases cited illustrate the problem of revolving prison doors in America’s criminal justice system, whereby criminals are thrown back onto the streets before the ink has dried on the arrest papers! Moreover, many criminals commit additional crimes while out on parole and carry stolen guns to commit various crimes even though the law prohibits them from carrying or possessing weapons. Specifically in “How does thirty years in prison become five?” the authors write, “The question still remains: how did a long-term career criminal with multiple violent sex crime convictions get released after only five years? Had he served his full thirty-year sentence, he would not have been able to cause a reign of terror in the small, normally peaceful community of Lake City, Florida” (p. 96).

7. The police cannot be there in time to save you. “Dial 9-1-1 and Pray” illustrates the point that the 5 to 15 minutes before the police arrive at a crime in progress may seem like an eternity, and may, in fact, mean the difference between life and death. The firearm in the hands of the intended victim makes the difference.

8. One cannot trust criminals with any pronouncement they might make during a robbery or violent confrontation. The case where the malefactor says, “Please don’t shoot. It’s a fake gun,” drives home the point to not necessarily believe what thugs may claim! The St. Petersburg, Florida, case illustrates the necessity for individuals to always be aware of their surroundings, be adept with their firearms, and keep their distance from the criminals. Another case demonstrated that one or more armed men violently entering your home, claiming they are “police,” in reality  may be predators bent on robbing you. These assailants in many case would not hesitate to kill you, whether they get their way or not — fearing identification later, they will eliminate witnesses so they won’t get caught.

Lastly, I’m touched by the human generosity of citizens who, despite having undergone horrendous ordeals defending themselves from wanton criminals, still express their humanity. Almost all of them expressed tremendous fear for their lives and had no other way out of danger but by having to pull the trigger. Consider the lady who was left “financially ruined, physically shattered, and struggling with post-traumatic stress disorder… She had black eyes, a large gash on her nose, several teeth knocked loose, and bruises everywhere… chronic disabling nerve damage to her back and spent more than a year in a wheelchair.” And yet her thought after she shot the criminal was, “ ‘what did I do?’ She couldn’t believe she had just shot someone… It took police more than 6 minutes to arrive” (p. 130-131). Contrast this lady to the criminals who uniformly express no remorse for their intended victims or the crimes they perpetrated, except that they got caught!

Guns and Self-Defense will help you formulate a plan for self, family, and home defense. But you must consider your state laws. Has your state enacted “Stand Your Ground” and Castle Doctrine” legislation? Know your state laws and reconcile them to your moral code, whether inside your home or in the street. Back away and escape if possible, but only if it will not endanger your life or those of others. If you are not familiar with firearms, take a gun training and safety course, and follow the rules.

At home, when sensing imminent danger, call 911, and get your gun. You may have less than one minute to get ready and repel a home invasion. Take the safety off, but keep your finger off the trigger until you are ready to shoot. Shoot only when your life or the lives of others are in imminent danger. Fire at the main body mass until the threat is no longer present. Do not shoot when the predator is down or has turned to run. After the danger has passed, put down the gun, render assistance to your family, and await the police. Be wary of wounded thugs. They may have another weapon.

In short, this is an excellent little tome that will keep you at the edge of your seat. The knowledge imparted can definitely save your life and the lives of those you love. Get this book and read it!

This article may be cited as: Faria MA. Tales of Human Survival With Firearms. A Book Review of Guns and Self-Defense. HaciendaPublishing.com, August 25, 2020. Available from: https://haciendapublishing.com/tales-of-human-survival-with-firearms-by-miguel-a-faria-md/.