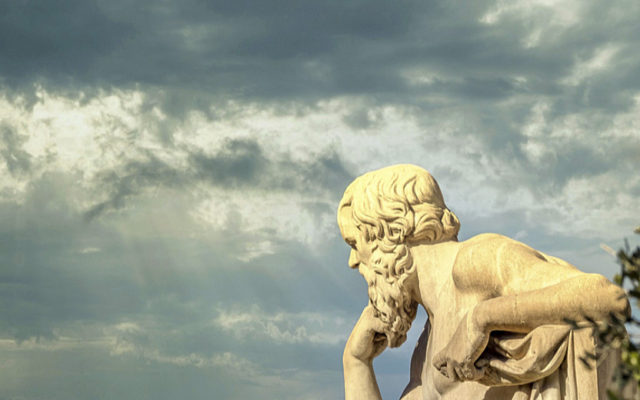 The study of the nature of reality leads to the Medieval argument (conflict) between Realists and Nominalists. I will defer further discussion on that controversy for now, and instead, deal with more contemporary philosophies.

Existentialism was a great philosophy for the 20th century in the same fashion that Stoicism was for the ancient world. However, both philosophies were too cold and aloof for most people, who prefer more consoling and comforting metaphysics. Christianity offered comfort in this world and salvation in the next. Today, pragmatism offers utility in tandem with the advances of science. Christianity triumphed over Stoicism in the same fashion that pragmatism has triumphed over existentialism and other more modern philosophies.

In fact, the pragmatism of William James has vanquished all, working hand in glove with such fads as the nonsense of “the politics of meaning,” the fad of celebrity worship, as well as the more serious and politically relevant “cult of victimhood,” and political correctness. These pseudo-philosophies seem to work in tandem in our modern age in socialistic fashion advancing the power of the State.

John Dewey (1859-1952) is a man who has left his mark on this nation’s education system, and to some extent philosophy and ethics. Dewey not only claimed that truth partakes of no transcendental or eternal reality, but also insisted that truth is merely an instrument used by men to solve their immediate mundane or spiritual problems. That useful instrument must necessarily change as man’s problems change (instrumentalism).

Dewey, of course, was a disciple of the American physician-philosopher William James (1842-1910), who founded the prevailing philosophy of pragmatism, whereby the truth of a proposition is “not determined from miracles of faith or logical reasoning, but should be judged solely, from its practical outcome.”

The logic of pragmatism had led to the development of situational ethics and moral relativism in which we are today mired, and the rejection of moral absolutes and the moral chaos in which we live in the 21st century.

I was told an interesting proposition by a “liberal philosopher with a streak of pragmatism.” He asserted: “Truth is a property of sentences. Sentences are human creations. Therefore, truth is a human creation.” This time I simply responded, “only one thing is for sure in your assertion, and that is, it is not true!”

In the study of logic, it would be said that the two premises would not justify the conclusion, either because the first premise is false or because the validity of the argument was wanting. In less metaphysical terms, one would simply state that were those assertions true, then Euclid would be astonished to learn that there are no such things as a equilateral triangles and parallel lines, and thus the buildings built on such geometric concepts and engineering feats are figments of our imagination!

Consider the mathematical proposition that 2+2 = 4; humanity’s opinion in this matter is irrelevant! And the architectural wonders built on such simple arithmetics are again figments of our imagination. From Pythagoras to Frank Lloyd Wright, such geniuses would be equally astonished as to the audacity of the premises or the validity of the argument!

But contradictions in proponents of pure reason and logic are legion. Let’s consider the philosopher clergyman George Berkeley’s (1685-1753) metaphysical stand of subjective idealism. Berkeley virtually rejected Rene Descartes’ (1596-1650) dictum, cogito ergo sum (“I think therefore I am”), and responded with his solipsism; Berkeley believed in nothing and denied the real existence of anything that did not exist in his own mind. And yet he believed in a pantheistic, immanent God. In short, he had no credence in universal truths, no objective reality, unless they were the realities of his own mind. Rene Descartes may think he exists in his mechanical world, separate from his mind (dualism) — but he does not, unless he exists in Berkeley’s mind (solipsism and immanence).

And from these metaphysical speculations, it is only short, easy steps to complete skepticism, moral relativism, situational ethics, deconstructionism — and back to sophistry!

It is not difficult also to project philosophy into political science, so that we no longer need strict construction of the U.S. Constitution or determine Original Intent, but interpret the parchment as a flexible, living document, according to the conditions of the time. This liberal concept turns the document into a dead document, irrelevant, but that is their real objective. Liberals have a way with words, deconstructionism:

‘When I use a word,” Humpty Dumpty said, in rather a scornful tone, “it means just what I choose it to mean — neither more nor less.”  ”The question is,” said Alice, “whether you can make words mean so many different things.”

“The question is,” said Humpty Dumpty, “which is to be MASTER — that’s all.”

From Alice,Through the Looking Glass by Lewis Carroll

I have been told that Judeo-Christian religion and Western philosophy have led to “interminable wrangles” in Western history.

Christian religion, like secular philosophies, brought dissension and controversies within the Western intellectual tradition but these debates, even conflicts, through experience and the process of trial and error, helped Western thinkers and planners to sift through the good and the bad, discarding the bad and preserving the good for the edification of Western thought and civilization.

So in essence, we had to go through Plato, Aristotle, Zeno and Epicureus as well as St Augustine and St Thomas Aquinas (and Medieval Scholasticism), and Martin Luther (and the Reformation) to reach the Renaissance and the rediscovery of the Greek and Roman Classics to attain the Enlightenment of Rene Descartes and John Locke, the skepticism of David Hume, and the Critique of Pure Reason of Immanuel Kant. And all of these led to the edification of thought and the betterment of Western institutions, and in time the miraculous creation of the United States of America.

Western culture and civilization, despite their “interminable wrangles” led to the recognition and attainment of the transcendental truths of the origin of Natural Rights to life, liberty, property, and the pursuit of health and happiness, and freedom of worship that we are fortunate to enjoy today in the free countries of the world.

It was that Western philosophy that brought us the intellectual freedom “to pursue our own private passions (i.e., freedom of worship, writing poetry, debating politics or philosophy, hunting or enjoying fresh mountain air in the country).

Pragmatism, a great departure from the idealism of philosophy or the charity of religion, a late comer to Western intellectual thought has wrought moral relativism, situational ethics, lax discipline in schools, and even an overly lenient criminal justice system. Excuses are found to justify irresponsible and criminal behavior to blame society or upbringing rather than the individual.

These modern concepts have led to lives devoid of moral compasses, especially in the impressionable young and often rebellious adolescents; and it is these empty concepts of moral relativism and situational ethics bolstered by the philosophy of pragmatism that often serve as an (a)moral excuse for youngsters’ impermissible behavior — and not surprisingly, gangs of “alienated” youth roam the cities leading a life of crime approaching chaos in urban society!

I have been told, by a law professor no less, that today’s problems are much more complex than in former times, and new paradigms are necessary to solve these otherwise insoluble problems. Being a learned intellectual he posited that Cicero’s problems were not comparable for example to President Barack Obama’s problems in the Middle East (e.g., Egypt and Libya).

I pointed out that Cicero was not just a great orator and lawyer defending his clients in court but as a Roman patriot and one of the two consuls of the Republic, Cicero faced formidable, insurmountable problems in his own time, not the least of which included resisting the abuses of the popular demagogues, opposing Julius Caesar and Marc Antony and the incited Roman mobs, but even attempting to save the Roman Republic by suppressing the insurrection of the traitor Catiline; later Cicero even tried to reconcile the two warring factions, the Senate and the military dictator Julius Caesar. No wonder he had been voted Consul and “Father of his Country” at least twice by the Roman Senate, and at the time of his own death by assassination, valiantly showed his bare neck to the sword of Marc Antony’s assassins.

Yes, we have our own societal problems today just as the ancients had theirs. Ours may seem more complex and insoluble because they are our problems. But, the ancient Romans, we must admit, faced theirs frequently with more courage and gravity. They did not have the advantage that time has given us with the advances of culture, progress, and the soothing of manners and mores of more advanced Western civilization, and the wider recognition of moral and ethical principles.

I have also been told that Natural Rights are a mere slogan! And yet, the moral code and the principles of self-governance in Western society are derived at least in part from Natural Rights theory and the Enlightenment. Time-honored principles of morality and government are derived from Natural Right’s theory fortified by a good dose of Graeco-Roman philosophy (e.g., the rule of law, the rights and civil duties of citizenship, self-government, right of appeal, etc.) and Judeo-Christian principles (e.g., compassion, charity, the sanctity of life, etc.).

Natural Rights have become transcendental truths in our political psyche as the American heirs of the Western intellectual and political traditions. What are our Natural Rights? The individual rights to “life, liberty, property, and the freedom to pursue our own health and occupation” to use John Locke’s expression, or the self-evident truths, unalienable rights to “Life, Liberty, and the pursuit of Happiness” to use Thomas Jefferson’s and the Founding Fathers’ words enshrined in our Declaration of Independence.

Continue to Part II of this essay…

1 thought on “Philosophic Ramblings (Part I): Morality and Society”