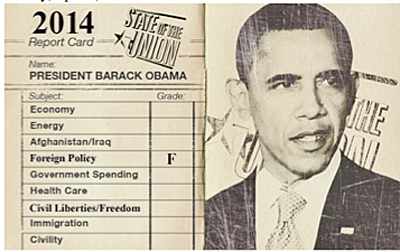 Barack Obama swore as U.S. President to uphold the Constitution of the United States. Instead he has violated his oath of office repeatedly by expanding the powers of the federal government at the expense of individual citizens and attempting to yield the sovereignty of the U.S. to the U.N. The Obama administration, for example, has sided with the U.N. against state laws in his own country on several occasions. In Arizona, the Obama administration attempted to prevent the state from enforcing immigration laws. Perhaps more egregiously he colluded with the U.N. to use the treaty power of the U.S Constitution to circumvent the entire document, particularly when it comes to the Second Amendment. We refer to the U.N. Small Arms Treaty that Obama and many Democrats supported. This treaty represented a backdoor attempt to impose restrictions on U.S. gun rights guaranteed by the Second Amendment, including registration of some firearms, banning and confiscation of others. By using the U.N. treaty, Obama and his political allies hoped to bring about gun control, bypassing the protections of the U.S. Constitution.

Barack Obama, virtually as his first accolade, received an unearned Nobel Peace Prize from his left-wing admirers in Stockholm, not for what he had achieved in terms of bringing about world peace and harmony, but for what he would supposedly accomplish as a promising American president!

During the preceding presidency of George W. Bush, Muammar Qaddafi of Libya, the l’enfant terrible of past ages, was tamed, and the “strongman” of Libya renounced the use of terrorism, allowing the U.N. to inspect his country for nuclear weapons. Ironically, that act of submission years later helped seal his fate when Obama decided to flex his skinny biceps in the airspace of Libya as a popularity-gaining stunt. With his unearned Peace Prize under his belt, Obama ordered the illegal bombing of Libya, killing untold civilians. Qaddafi was killed in the ensuing civil war but peace and stability in the region remain nowhere in sight.

Tunisia and Egypt, two former U.S. allies and friends, have also been destabilized by the “change” brought about by the inclement weather of the “Arab Spring” that Obama so enthusiastically endorsed in the Middle East. As a result, our enemies in that region are on the rise, and we are losing our staunchest friends and allies!

And as if that was not enough, in North Africa on the night of the anniversary of 9-11 in 2012, the U.S Ambassador J. Christopher Stevens and several other courageous Americans were killed while serving at their post in the diplomatic mission in Benghazi, Libya — massacred by heavily armed gunmen, the type of insurrectionary mob our President Obama supported in the “Arab Spring.”

According to European newspapers, torture and “medieval depravities” were inflicted on the Americans before they were killed. A cover-up has resulted since then, and former Secretary of State Hillary Clinton has not been forthcoming with the truth about what really happened in Benghazi and explaining why our diplomats were not protected. The investigation has fallen short and no one has been prosecuted.

On December 4, 2011, the U.S lost a sensitive U.S. RQ-170 drone, conducting reconnaissance missions in Iran near the city of Kashmar, to the Iranian Islamic government. Why wasn’t this highly sensitive drone destroyed before it fell into the Iranians’ hands? Reportedly, President Obama did not order or refused to order its destruction. This past September 2013, the Iranians reported that they have completed the decoding of the surveillance data and software extracted from the captured CIA drone. The captured data is reportedly a “gold mine” of intelligence that will be available to Iran as well as to its allies, China and Russia.

Obama did attempt to get all the political and military credit for the tracking down and killing of Osama Bin Laden, the mastermind of 9-11 and the head of the Islamic terrorist group al-Qaeda, in Pakistan on May 2, 2011. But the credit belongs to the U.S. Navy Seals, who conducted the secret operation, and the much-maligned Central Intelligence Agency (CIA), whose analysts and assets had been tracking Bin Laden assiduously for years.

The latest flop is the Ukraine fiasco in the Crimea. Do you remember the scandalous incident when during missile defense talks in 2012 Obama told then Russian President Dmitry Medvedev that he [Obama] would have “more flexibility” after the U.S. presidential election? The chickens of poor diplomacy came home to roost in the Crimean situation during the last couple of weeks. It now seems obvious the destabilizing situation in the Ukraine may have been fomented in part, not only by Russia’s belligerence and expansionism, but also by Obama’s perceived pusillanimity and slavish servility to the Russians! It is worth reminding the reader the long planned U.S. Missile Defense for the Ballistic Defense of Europe (aka as the European Interceptor Site) which was to be deployed in 2009 in Poland and the Czech Republic (with the enthusiastic approval of those countries which fear militant Iran as well as expansionist Russia) were cancelled by Obama utilizing his “flexibility” option. If Obama exercised his flexibility abandoning America’s European allies to accommodate Russia, it stands to reason Obama likewise would have more accommodating flexibility with Russia’s annexation of the Crimea!

In a recent letter to the editor in the Macon Telegraph, an astute reader, summarized the situation as follows: “Recall that in 2009 President Obama sent Hillary Clinton to do a “reset” with Russia — as though geopolitics is some kind of video game in which you can start over if you don’t like how things began. This reset involved cancelling the sanctions President Bush had imposed on Russia for invading the country of Georgia in 2008. Additionally, Obama pulled the security carpet out from under our Eastern European allies when he unilaterally cancelled the missile defense shield that we had promised to deploy to Poland and the Czech Republic. Finally, in the 2012 presidential campaign, when Mitt Romney said that Russia was a geopolitical threat, Obama arrogantly sneered and mocked him for saying so.”

It seems the letter writer agrees with me that Erick Erickson was on the right track, when he exclaimed in his GOPUSA column, “there are chickens roosting in the Crimea.” Let’s add that President Barack Obama, the Nobel Prize winner, is mired knee-deep in blame! In short, the foreign affairs scenario can not be worse for the U.S under the present administration: Simply, the Russians have Vladimir Putin protecting their interests; we have Obama squandering ours!

This early mid-term report card is short and obviously incomplete but it can be added to and amended as needed by the alert and vigilant readers of GOPUSA by writing comments about other foreign affairs incidents that I may not have mentioned or not reported in enough detail. Hopefully, we will also have an Obama report card on domestic issues soon!

This article may be cited as: Faria MA. Obama’s Mid-term Report Card — Foreign Policy at a glance! HaciendaPublishing.com, March 24, 2014. Available from: https://haciendapublishing.com/obamas-mid-term-report-card–foreign-policy-at-a-glance/

The photographs used to illustrate this commentary came from a variety of sources and did not appear in the GOPUSA.com article.