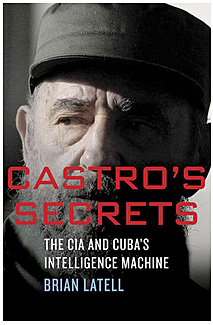 Faria: Fidel Castro, Cuban Intelligence and the Assassination of JFK

A book published last year by Brian Latell, a professor, scholar, and retired CIA officer who had been active in foreign intelligence for 35 years, has not received the attention it deserves. The book, Castro’s Secrets: The CIA and Cuba’s Intelligence Machine (2012) relies extensively on information provided by half a dozen Cuban defectors and several retired CIA officers. However, the most intriguing and reliable revelations come to light from Florentino Aspillaga (“Tiny”), the most knowledgeable and valuable foreign intelligence officer to ever defect from Cuba’s foreign intelligence service, the powerful Directorio General de Inteligencia (DGI). Why does the book require careful perusal and attention? Because it contains information on the role the DGI, which had been run by Fidel Castro himself (until 2006), played in the death of JFK.

Tiny Aspillaga defected that fateful summer in 1987 “the Cuban Year of the Spy,” when six major Cuban defections took place. Aspillaga had served with distinction in the elite ranks of the DGI and had even received a personal commendation from Fidel Castro.

Prior Knowledge of JFK’s Assassination

President Kennedy and his brother Robert, the Attorney General, had brought immense pressure to bear on the CIA in order to continue their obsessive but futile covert war against Fidel Castro, which resumed in the Spring of 1963, several months after the Cuban Missile Crisis, and did not end until November 22, 1963, the day of JFK’s assassination. It was futile because Fidel via his DGI double agents had been aware all along of the clandestine CIA operations, including continuing plans for a coup and “regime change,” as well as Castro’s assassination.

But most intriguing, particularly with the approaching 50th anniversary of the assassination of JFK, were the revelations of Tiny Aspillaga concerning Cuba’s involvement in that tragic event. The super defector revealed that as a young radio operator at Castro’s ultra-secret Jaimanitas listening post on the northern coast of Cuba near Havana, he was suddenly and without precedent ordered to redirect his listening antennas from his usual target, the CIA, and switch the dials to Texas! It was the morning of November 22, 1963, three hours before the JFK assassination that took place at 12:30 p.m. (Dallas time). Aspillaga informed Latell, as he had told his previous debriefers (and had written in his unpublished memoirs in 1990): “Castro knew. They knew Kennedy would be killed.” Latell then goes on to rearrange the pieces of this giant jigsaw puzzle and comes up with a clear, and in my opinion, the most probable version to date of the connection between Fidel Castro and the Kennedy assassination. We should note Castro had always publically insisted that the Cuban government knew nothing about Lee Harvey Oswald until they heard about Kennedy’s assassination in Dallas on November 22, 1963. But this declaration has been proven to be a lie. Oswald had visited the Cuban embassy in Mexico City several times in September 1963, attempting to obtain a visa to enter Cuba. He allegedly dated the Mexican receptionist at the embassy, Silvia Duran, with whom he had become acquainted during his visits.

What had not been known was that Oswald had become belligerent and stormed out of the Cuban embassy making a threat to kill Kennedy. Fidel Castro admitted to Jack Childs, who he trusted as an old Bolshevik, friend of Khrushchev, and senior official in the American Communist Party (along with his brother Morris Childs), that “Oswald stormed into the embassy, demanded the visa, and when it was refused to him, headed out saying, ‘I’m going to kill Kennedy for this.’ ” What Fidel did not know was that Jack Childs and his brother Morris Childs were in fact FBI master spies, American double agents. This information was too sensitive to be discussed at the time of the Warren Commission in the mid-1960s and the House Assassination Committee in the late 1970s and was filed as Top Secret in order to protect the two brothers and their wives who were still in active service as FBI double agents.

Lee Harvey Oswald’s comings and goings, to and fro, between the Cuban and Russian embassies (and the CIA secret tapes of conversations of the Russian embassy) — in late September and October of 1963, while seeking a visa to visit Cuba — is well documented in another enthralling and well-researched book, Our Man in Mexico: Winston Scott and the Hidden History of the CIA (2008) by Jefferson Morley.

Another intriguing but little discussed, or even known documented fact, is that Oswald visited Cuban exiles, Sylvia and Annie Odio, at their home in Dallas on September 25, 1963, shortly before Oswald traveled to Mexico. Their father was a Cuban rebel incarcerated in a Cuban prison since 1962 for anti-Castro activities. According to Sylvia Odio, Oswald was accompanied by two Cubans, who were evidently Castro’s agents.* They tried to pose as anti-Castro activists to get information from Odio to convey to the Cuban secret service. Oswald also wanted to prove and give credence to his pro-Castro activities in the U.S. before he visited the Cuban embassy seeking a visa to travel to the communist island. This information was obtained by the FBI but was not given to or used by the Warren Commission, which was in a hurry to conclude their report before the approaching November elections of 1964, at the instigation of the new president, LBJ. This is all well-documented in both Brian Latell’s book, Castro’s Secrets and Edward J. Epstein’s book, The JFK Assassination Diary.

Returning to Oswald’s visitations to the Cuban and Russian embassies in Mexico City, Latell has convinced me that Fidel knew of the imminent assassination because as Cuba’s supreme spymaster, Fidel had been apprised of Lee Harvey Oswald’s threat to kill Kennedy following Oswald’s visit to the Cuban embassy in Mexico City that September 1963. The experienced senior DGI agents posted at the Cuban embassy at that time plausibly used calculated human psychology to plant the seeds and “winding up” the distraught Oswald without necessarily having to formally recruit him for the assassination mission. Oswald did not need further encouragement. He had already been “wound up” by the barrage of vitriolic speeches Castro made denouncing, attacking, and warning Kennedy and the CIA; all through October and November, and up to the time of the assassination in Dallas, Castro had been hammering, warning JFK.

The warnings were not being heeded, and so Fidel Castro, through his DGI agents in the Cuban embassy, allowed and probably even encouraged Oswald to shoot Kennedy, before the CIA snipers would have a chance “to get” Castro. Fidel had planned well. He had the perfect alibi at his Varadero beach resort home, where on November 22, 1963 he was conveniently entertaining Kennedy’s friend and envoy, Jean Daniel. Ominously at the same time, CIA Chief of Operations Des FitzGerald, acting as Robert Kennedy’s personal (and family related) envoy, was meeting with Cuba’s would-be military coup leader and Castro assassin, Comandante Rolando Cubela, to add the final touches to their plot. Castro knew all about this too, just as he had known about previous arrangements made in the first week of September in Porto Alegre, Brazil, where Cubela’s conversation with the CIA were probably monitored via secret listening posts.

At the same time in Havana, Fidel Castro chose a gathering at the Brazilian embassy on Sunday, September 8, to announce his warning to Kennedy and the CIA via his chosen American journalist, Daniel Harker. Castro admonished the Americans: “We are prepared to fight them and answer in kind. U.S. leaders should think that if they are aiding terrorist plans to eliminate Cuban leaders, they themselves will not be safe… United States leaders would be in danger if they helped in any attempt to do away with leaders of Cuba.”

The Attorney General’s legal war against the mafia continued, even during the second stage of the covert war against Castro — i.e., Operation Mongoose (1961-1962) — when the mafia had been asked to help with the assassination efforts against Fidel. The mafia was still on the run, despite “the services” it had rendered in Illinois during the 1960 presidential election and was still providing via the informant Johnny Roselli of Chicago and the questionable information provided by Santos Trafficante of Florida. Trafficante may have still been a friend of Fidel from their Havana days. In 1959, Fidel had allowed Trafficante to leave Havana for Miami with his casino money, and after providing further services in the South Florida-Miami community, Trafficante ended up in Tampa, where he remained the long time (and tight-lipped) crime boss until his death in 1987. There were also the mafia godfathers Sam Giancana of Chicago and Carlos Marcello of New Orleans, both of whom came to hate Robert Kennedy with a passion, and they had frequently not minced words about their hatred for both Kennedy brothers because of their ingratitude and treachery.

I am convinced that the mafia leaders came to believe in their legendary reaching power and thus suspected their own indirect involvement in the JFK assassination. Consequently, they used the mobster and nightclub owner, Jack Ruby, to kill and silence Oswald, the supposed “patsy.” Likewise, many of these mafiosos who had been involved in the ill-fated Operation Mongoose were later themselves fatally silenced, including Johnny Roselli, the friend of the legendary “American James Bond,” CIA Chief Bill Harvey, and the flamboyant and outspoken Chicago boss, Sam Giancana. To send a clear message and warn others about enforcement of the mafia code of silence, Roselli and Giancana were both murdered in gruesome, gangland style. Marcello died in Louisiana of Alzheimer’s disease in 1993. Trafficante never talked. There were no leaks.

I have also come to believe Oswald did the shooting alone, despite the objections to the controversial “magic bullet” theory and the highly disturbing Zapruder film, and my own long-time, previously held belief that there were other shooters. Oswald did it alone but apparently with the blessings (and encouragement) of the infamous DGI — and ultimately Fidel Castro.

* Watch a video interview with Sylvia Odio at http://www.youtube.com/watch?v=1am-EkfBcmM

This article may be cited as: Faria MA. Faria: Fidel Castro, Cuban Intelligence and the Assassination of JFK. HaciendaPublishing.com, November 21, 2013. Available from: https://haciendapublishing.com/faria-fidel-castro-cuban-intelligence-and-the-assassination-of-jfk.

Different versions of this article were published in GOPUSA.com on November 21, 2013 and in the Macon Telegraph.

The photographs used to illustrate this essay for Hacienda Publishing came from a variety of sources and do not appear necessarily in Latell’s book or in other public versions. It is reprinted in the wake of Fidel Castro’s death, November 25, 2016.