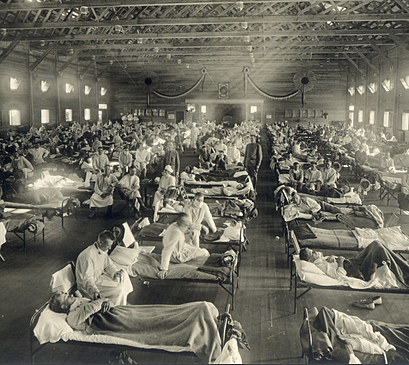 And I looked, and behold, a pale horse; and his name that sat on him was Death.
Revelation 6:8

At the peak of his reign in A.D. 540, after accomplishing major political, judicial, and military successes, Justinian’s empire was struck by the old enemy of mankind, one that not even Justinian could conquer: pestilential disease. The bubonic plague, which struck with a vengeance in A.D. 540, is justifiably the worst recorded pandemic to ever afflict humanity. Records regarding the dimensions of the devastation, suffering, and death were carefully kept by Justinian’s chief archivist, secretary and historian, Procopius….

At the time the horrible plague struck, Justinian was engaged in a war that was being waged fiercely on two fronts. We have already described the military feats of his armies as they battled the remnants of the Germanic tribes in the West. But during the years A.D. 541 and 542, Justinian was also engaged in the East fighting the recalcitrant Parthians….

If we think of the dimensions of the devastation of the bubonic plague of the 6th Century in the midst of the Dark Ages—the savage imperial wars waged against the barbarian hordes, the terrible famines, the ubiquity of death and destruction, and finally, the full unleashing of the cataclysmic pandemic, the worst pestilence the world has ever seen—it should not be difficult to find within man’s psyche invocations against the full horror and conjurations in the face of the surrealistic visitations of the dreaded Four Horsemen of the Apocalypse….

Justinian, defeated by the cataclysm, realized that the bubonic plague was a new and unconquerable enemy, an enemy that was demolishing his once invincible armies and killing his generals faster than the wounds inflicted on the battlefield by his mortal enemies. Demoralized and disheartened, he returned to his capital, Constantinople, only to find that there too the terrifying pestilence was relentlessly killing his people, rich and poor, regardless of kinship or station in life.

The mortality in the city at this time was approaching 5,000 deaths a day and would eventually reach an all-time high of 10,000 deaths daily. In despair and in need to fill the void, Justinian sought solitude, and the comfort and solace of religion.

Excerpted from “The Reign of Justinian” and
“The Bubonic Plague of The 6th Century,”
Vandals At The Gates of Medicine

In a previous essay, “In Search of the Fountain of Youth,” I discussed the great advances brought about in research, development, and medical technology which contributed to the unprecedented increased in lifespan in our 20th Century.(1) In this article, I will expand on this same topic, as it relates to strides made by public health in the conquest of infectious diseases and prolongation in lifespan. Here is the story:

Prolongation of productive lifespan took place in the late 19th and early 20th Centuries as a result of the successful conquest of innumerable diseases that had been ravaging mankind since time immemorial. For example, typhoid fever, typhus, and diphtheria (as well as sundry afflictions such as streptococcal and other garden variety bacterial infections that cause pneumonia, gastrointestinal disorders and other ailments) were controlled by a variety of medical and public health measures. Dr. John B. Thomison, Editor Emeritus of the Southern Medical Journal, reminds us that, as late as 1898 during the Spanish-American War, America “lost more men to typhoid fever than were killed in battle.” And indeed, among U.S. forces (consisting of 107,000 troops), the death toll from typhoid fever was 15,000 deaths out of the 27,000 cases afflicted with the infestation.(2)

As we shall see, the same was true for typhus in World War I. Cleanliness and the much-maligned pesticide, DDT, conquered typhus; so that by the time of World War II, typhus had been eradicated and death from this virulent infection was nonexistent.

Childhood diseases, such as whooping cough and measles, and sexually transmitted diseases (STDs), such as syphilis and gonorrhea, and the dreaded disease, tuberculosis, were eventually controlled through improved public health measures, hygiene and sanitation, advancing medical care, and subsequently, the widespread use of antibiotics.

One of the achievements of this era (and it cannot be overstated) was public health’s implementation of public education, particularly the need for personal hygiene and public sanitation. In a recent publication, Drs. Nathan and Jonathan R. Hiatt point out that between 1843 and 1858 life expectancy in the U.S. and Great Britain was less than 42 years. With the efforts of Dr. John Snow, a public health advocate and early anesthesiologist who had a keen interest in epidemiology and other issues in public health—such as the use of uncontaminated potable water for drinking and proper disposal of sewage—public health essentially eliminated cholera in Britain by the 1870s and helped stretch the lifespan of British citizens.

The advent of the Industrial Revolution (c.1750-1850) brought an “improved standard of living, higher wages, improved nutrition, cheap soap, and inexpensive cotton clothing” which also contributed to better health and longevity.  The typhus epidemics, for instance, were better controlled because cotton clothing, unlike lice-infected woolen, could be washed and rendered free of lice.(3)

The discovery of the germ theory of disease concomitant with the advances in bacteriology and microbiology, the development of antiseptic techniques, and the progressive elimination of dirt and filth, were all major building blocks on which the solid basis for public health, sanitation, and personal hygiene were founded.

All of these measures, taken during the age of scientific medicine in the mid- to late 19th and early 20th Centuries, contributed significantly to the prolongation of life. By 1900, improved nutrition, superior sanitation, and the advances in the field of bacteriology had increased life expectancy to age 47.3.

Before the advent of scientific medicine, tuberculosis was a devastating disease. In the 19th Century, in fact, tuberculosis struck with a vengeance. It was said that when Emperor Napoleon was pursuing his conquest of Europe, fully a quarter of the continent’s graves were filled with tuberculosis victims.(4)

Tuberculosis was christened the “White Death” because the skin of those afflicted turned alabaster, thin, and translucent, making small veins visible. Tuberculosis was also called Consumption because it “consumed” the health, strength, and constitution of its victims.4

The increase of tuberculosis (also referred to as TB, Tbc, etc.) in the 19th Century, it must be conceded, was due to some aspects of the Industrial Revolution, such as the movement of large numbers of people from rural areas into crowded cities and heavily populated areas.

Tuberculosis was non-discriminatory, for in the end, the White Death took both the poor and the rich, the destitute and the affluent, the masses and the intellectuals. The 19th Century British novelist, Anthony Trollope (1815-1882), succumbed to it, as did his brother and sister, as well as four of his children. Other untimely victims were the Brontë sisters: Emily (1818-1848), Anne (1820-1849), and Charlotte (1816-1855), all of who died of phthisis, yet another name for this dreaded disease.

The American transcendentalist author of Walden, Henry David Thoreau (1817-1862), and the famous Franco-Polish composer and pianist, Frédéric Chopin (1810-1849), also perished from the White Death. So did the English physician, John Keats (1795-1821), who gave up surgery for romantic poetry.  Franz Kafka (1883-1924), the Czechoslovakian existentialist philosopher and short story writer, succumbed to TB in the prime of his life. In fact, Panati points out that, in the year Kafka died (1924), over 200,000 Americans also died from tuberculosis.(4)

In 1900, tuberculosis was the third most frequent cause of death with a mortality of 194.4/100,000 population; by 1930, tuberculosis had dropped to fourth, and its mortality had further declined to 71.1/100,000.(5) The improvement was due to better understanding of tuberculosis and its milieu, so that better education could be implemented and sanatoria (isolation) could be instituted; x-ray could be used for diagnosis and follow-up care; improvement could, perhaps, even have resulted from the rudimentary and crude medical treatment of the time: pneumothorax (1898) and thoracoplasty (1911). As a result of these measures, and most importantly, the use of antimicrobial therapy, by 1988, tuberculosis mortality had dropped to the bottom of the list and ranked 21st.

I am in accord with Drs. N. Hiatt and J. R. Hiatt that “the decline in tuberculosis mortality is only one example of the accomplishments that increased longevity before the age of antibiotics and of modern scientific medicine.”(3)

In comparison to the scourge of our age, AIDS, the difference in numbers is astronomical. Despite the publicity rendered to our politicized malady (AIDS), the total number of victims of this new affliction has topped 200,000 in the U.S., a high number, no doubt, but it has taken over a decade to reach this number. By comparison, tuberculosis claimed 200,000 lives in a single year, and then continued to ravage the land year after year, in a United States with a much smaller population pool. Moreover, we know a lot more about AIDS today, than physicians knew about tuberculosis a century ago. In the fight against tuberculosis, public health and physicians worked together with a unified purpose of eradicating the public menace. In contrast, AIDS, a politically protected disease, has been treated as a socio-political issue rather than a public health issue.

Because of the politicization of this disease, medicine’s fight against AIDS has become extremely difficult. Physicians and public health officials are not free to fight this epidemic as forcefully as they had been able to do with other diseases in the past. Public health workers and private physicians are still fighting this epidemic with one hand tied behind their backs. The mainstays of public health measures are not utilized because, when it comes to AIDS, physicians are restricted in what they can normally do to contain this dreaded disease. There is no universal testing because of legal restrictions and cumbersome rules regarding counseling, and no contact tracing because confidentiality must be protected at all cost, even if infected individuals place others at risk. Thus, measures to combat AIDS are limited, not only because of circumscriptions in our medical knowledge and the ingenuity and resilience of the virus, but by the force of law and the political expediency of the moment.(6,7)

Let me conclude by stating that recently the mood of public health officials was characterized as “somber,” as a result of the Republican conservative tsunami that swept Congress and the nation on November 8, 1994.(8)

And, yes, public health advocates do have legitimate reasons for their “somber mood,” but not for their “gloomy predictions.” It appears that the direction of the new Congress is to refocus public health from an increasingly politicized agency to its former traditional role and more mundane goals of stamping out truly epidimiologic diseases. As a staunch supporter of public health in its former role, I hope public health will heed the message and thereby resume its glorious mission of fighting true pestilential diseases and afflictions, whose culprits truly follow Koch’s simple Postulates of Pathogenicity, rather than the trendy ideologies (i.e., politization of AIDS policy and promotion of gun control “research”) that have so recently defocused its mission.

4. Panati C. Extraordinary Endings of Practically Everything and Everybody. New York, Harper and Row Publishers, 1989.

This article, which originally appeared in the May 1995 issue of the Journal of the Medical Association of Georgia as Dr. Faria’s “Editor’s Corner,” was subsequently updated and re-published as Chapter 17 in Medical Warrior: Fighting Corporate Socialized Medicine (1997). It has been posted here and is now accessible on this website for the benefit of our readers.