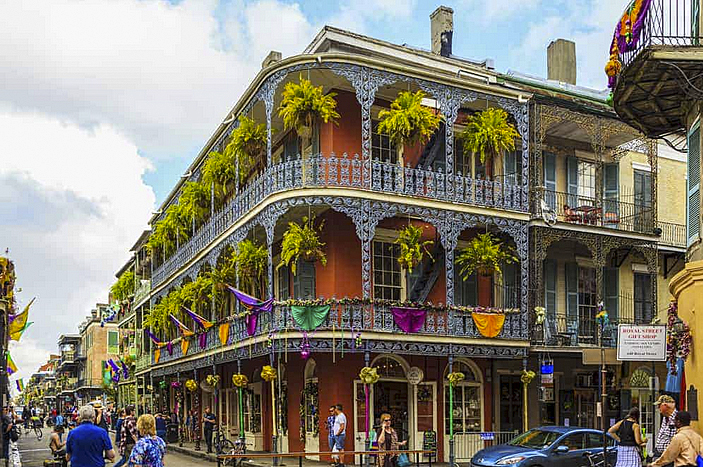 For a city that depends on tourism, these kinds of incidents are devastating to the economy of New Orleans.

Videos showed hundreds of people fleeing the gunfire, running for their lives. Even though police officers were in the vicinity last night, the brazen shooters were not deterred. A 15-year-old boy was the shooter in the Iberville Street incident. The victims were also teenagers.

In the French Quarter, there are always extra officers since members of the New Orleans Police Department (NOPD) are assisted by members of the Louisiana State Police. Unfortunately, it does not seem to deter the regular outbursts of violent crime.

In New Orleans, crime increased dramatically in 2020 and the trend is continuing for 2021.Violent crimes such as shootings, armed robberies, car jackings and murder are significantly higher this year.

According to the personal finance website, WalletHub, New Orleans has suffered through the highest per capita increase in homicide in the country since the start of the pandemic. WalletHub reported that there were “18 homicides per 100,000 residents in Q2 2021, which topped the list, as did its 7.42 homicide increase since Q2 2019.”

Similar data is also being reported by residents of New Orleans. In the annual Crime Coalition survey, New Orleans residents testified that the city is becoming unsafe. In the 2020 survey, “57 percent of residents said the city was safe. In the 2021 survey, only 35 percent say it’s safe — that’s a 22-point drop.”

The citizens of New Orleans have an accurate perception of the crime.  According to the NOPD, by mid-July, there were already 250 shootings, 108 murders, 120 carjackings and 192 armed robberies in New Orleans.

New Orleans has had a violent crime problem for decades; however, it has only gotten worse in recent years. Historically, New Orleans has been ranked as one of the murder capitals in the nation.

The reasons for the carnage are longstanding and multi-faceted such as broken families and no discipline in public schools. However, New Orleans also has a dysfunctional criminal justice system. The recently elected Orleans Parish District Attorney was financially supported by George Soros and believes in a much more lenient approach to dealing with criminals than his tough on crime predecessor. Also, the criminal court judges are notoriously lax in handling juvenile offenders, who comprise a major percentage of these violent offenses.

Currently, the city has about 1150 police officers, but to adequately provide safety to citizens and tourists alike, law enforcement experts contend there needs to be approximately 1600 officers.

The shortage began during the last mayoral administration when budget cuts resulted in the cancellation of new recruitment classes of officers. The deficit has never been addressed since that time. In the meantime, the overall anti-police attitude across the country has impacted New Orleans as well. This has led to many officers taking retirement or leaving for other departments such as the neighboring Jefferson Parish Sheriff’s Office.

In this respect, New Orleans is like many other cities led by Democrats. Statistics show that crime is exploding in all these areas. While the soft on crime approach was a problem for many years, the riots of 2020 truly accelerated the crisis in urban America.

In the aftermath of the death of George Floyd, crime in cities across the country erupted. Along with riots and looting, there were irresponsible calls to defund the police. With police being targeted by Antifa and Black Lives Matter protesters, more officers decided to retire. At the same time, it became much more difficult to recruit new police officers to join departments under siege.

Throughout the country, cities with Democratic leadership are seeing a tremendous increase in crime in 2021. While President Biden and congressional Democrats like to blame “guns,” the real problem is that there are too many criminals on the streets. Cities across America do not need gun control, instead, what is really needed is criminal control.

Jeff Crouere is a native New Orleanian and his award winning program, “Ringside Politics,” airs nationally on Real America’s Voice Network, AmericasVoice.News weekdays at 7 a.m. CT and from 7-11 a.m. weekdays on WGSO 990-AM & Wgso.com. He is a political columnist, the author of America’s Last Chance and provides regular commentaries on the Jeff Crouere YouTube channel and on Crouere.net. For more information, email him at jeff@ringsidepolitics.com