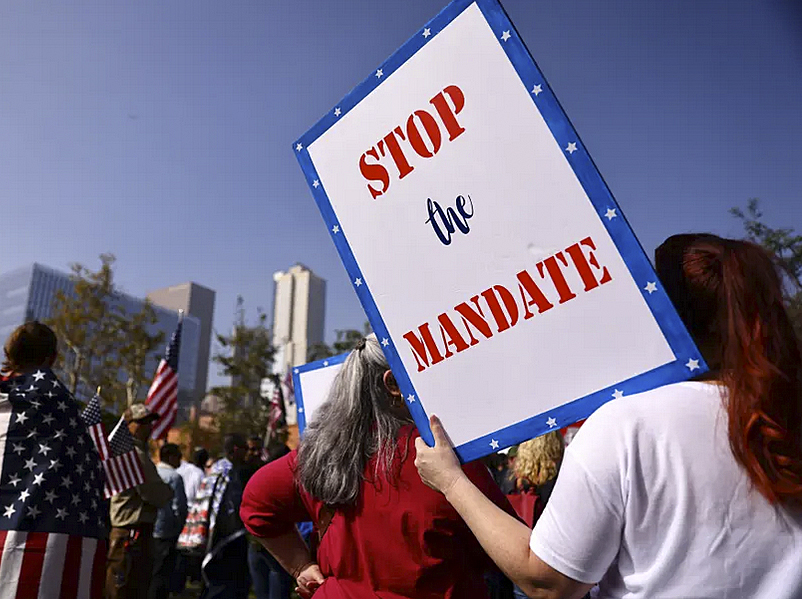 Opposition Is Growing To Un-American Vaccine Mandate by Jeff Crouere

After two years of fear mongering from the country’s political, media and medical elite, President Joe Biden ordered a highly controversial COVID-19 vaccine mandate on September 9, 2021. He authorized the Occupational Safety and Health Administration (OSHA) to prepare these orders for businesses with over one hundred employees.

On November 4, 2021, OSHA officially announced the rules; however, enforcement was not set to begin until early in 2022. The orders require employees to take the COVID-19 vaccine or submit to weekly tests proving they are free of the virus. The businesses might have to terminate their best employees if they do not comply with these stringent requirements.

This was Biden’s most aggressive step to force Americans to take a vaccine, regardless of their age or health condition. It also mandated compliance regardless of whether employees were previously infected and had natural immunity.

Coupled with the continuing mask mandates and the ongoing restrictions on certain businesses, the American people must realize that the hyping of the COVID-19 pandemic is not going away anytime soon. Regardless of whether the number of hospitalized patients or virus-related deaths is increasing or decreasing, the corrupt elite need the pandemic to continue. Of course, American citizens in the grips of fear of COVID-19 are easier to control and manipulate.

The Biden administration is intent on forcing mandates on the nation, despite the economic cost. Already, our economy is suffering from the Biden administration’s horrific mismanagement. The country is facing soaring inflation, increasing gasoline prices, foreign energy dependence and a wide-open border with a massive surge of millions of people pouring into the country.

Instead of dealing with the country’s real problems and offering useful solutions, the Biden administration continues to focus on its favorite issues: vaccine mandates and climate change action. No matter what issue develops, the Biden administration finds opportunities to advocate for more vaccine compliance and more green energy “solutions” to the “crisis” of climate change.

There should be little wonder why the poll numbers for Biden and the Democrats are plunging. This administration is not listening to the American people. Instead, it is forcing its unpopular agenda on the country.

Regarding the vaccine mandates, it is time the American people channeled the anger from the character Howard Beale, the anchor in the movie Network, performed brilliantly by Academy Award winning actor Peter Finch. In the movie, he famously encouraged people to open their windows and yell, “I’m mad as hell and I’m not going to take this anymore!”

The American people should not meekly accept our federal government trying to force citizens to take a vaccine against their will. The mantra, “my body, my choice” should apply to vaccines. In this country, medical privacy should be the guaranteed right of every American citizen. Whether we take a COVID-19 vaccine or not should be no one’s business, especially the federal government. These actions are hallmarks of communist dictatorships, not a 245-year-old constitutional republic like the United States of America.

Fortunately, there has been noteworthy progress in recent days. For example, the new commander of the Oklahoma National Guard, Army Brigadier General Thomas Mancino, informed the 10,000 troops under his authority that he will not be enforcing the COVID-19 vaccine mandate ordered by U.S. Defense Secretary Lloyd Austin. The order impacted all branches of the military, including the National Guard in each state.

Mancino made the announcement the day after his appointment to the position by Oklahoma Governor Kevin Stitt, who had already requested that the Defense Department end any type of vaccine mandate on the members of the Oklahoma Army and Air National Guard. Stitt called the mandate “irresponsible.”

General Mancino will not enforce the mandate on the Oklahoma troops despite the Defense Department’s order to “discipline and ultimately discharge (non-vaccinated) servicemembers.”  This protection will only extend to the Oklahoma National Guard members while they are under state command, not when they are under the authority of the federal government.

In his reply to these actions in Oklahoma, Pentagon spokesperson Admiral John Kirby, stated that Secretary Austin will respond to the Governor of Oklahoma “appropriately.” He claimed that Secretary Austin believes that the vaccine mandates make the country’s armed forces, including the national guard units of each state, “a more ready force.”

Along with the decision of the Oklahoma National Guard Commander, the opponents of the vaccine mandate secured a major victory in the United States Court of Appeals for the Fifth Circuit. On Friday evening, the court delivered a huge defeat to the Biden administration, which will not be able to proceed with plans to force businesses with over one hundred employees to mandate COVID-19 vaccines or weekly testing for their workforces.

According to the judges, the mandate most likely “violates the constitutional structure that safeguards our collective liberty.” The judges also claimed the mandate “grossly exceeds OSHA’s statutory authority,” and is “staggeringly overbroad.”

The decision was a powerful strike against the Biden administration’s aggressive vaccine plans. In one section of the decision, the three judge panel accurately noted the economic costs that would be imposed on American businesses, “The Mandate imposes a financial burden upon them by deputizing their participation in OSHA’s regulatory scheme, exposes them to severe financial risk if they refuse or fail to comply, and threatens to decimate their workforces (and business prospects) by forcing unwilling employees to take their shots, take their tests, or hit the road.”

These employees would “hit the road” only because of their stance on vaccines, not their work performance.

The mandate would have impacted eighty million Americans, about two-thirds of the private sector workforce in the country. According to Louisiana Attorney General Jeff Landry, who participated in the lawsuit against the Biden administration, “The Court’s action not only halts Biden from moving forward with his unlawful overreach, but it also commands the judicious review we sought.”

Let us hope this upcoming “judicious review” will put a stake in this un-American vaccine mandate for the last time.