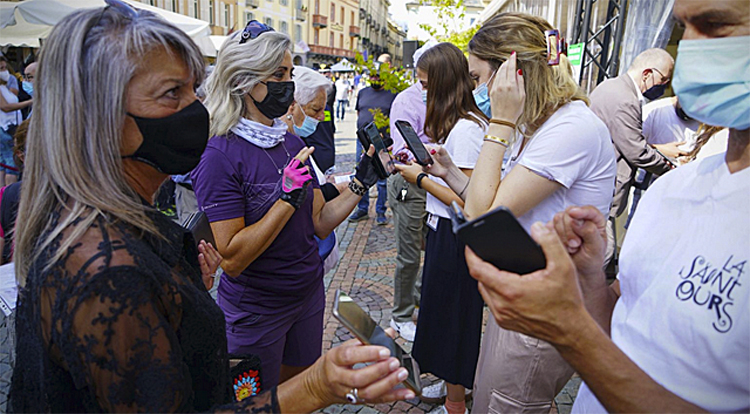 The insanity must finally end, now. After two years of living in fear, Americans must get up off their knees and embrace their freedoms once again.

Our forefathers did not fight and die for this country to be overtaken by insane bureaucrats, fearful politicians, and medical professionals beholden to the federal government and the pharmaceutical industry.

For two years, the mainstream news media has constantly sounded the alarm about COVID-19, then the Delta variant, followed by the Omicron variant. Not surprisingly, there is now another variant being promoted. In fact, there will always be another variant on the horizon.

This fear mongering is very profitable for the billionaires, the major corporations, and the pharmaceutical companies. It is also politically advantageous for Democrats who push for mail-in balloting, voter drop boxes and ballot harvesting. In addition, Democrats demand a ridiculously elongated period of voting. It worked brilliantly for Democrats in 2020 and they are counting on it to succeed again in 2022; however, for that to occur, Americans must remain in a constant state of fear.

Sadly, our country should have never locked down, not for one day. We will never fully recover from the millions of jobs and businesses that were lost. Megalomaniacs like Dr. Anthony Fauci, Chief Medical Advisor to the President of the United States, should have never been given a media platform. Not one mandate, which is blasphemous in a free nation, should have ever been issued.

We must rectify the glaring mistakes of the last two years. We must return to normality in our personal and business activities. America was built on the concept of liberty, not government dictates.

No worker and no student should be forced to vaccinate. Every vaccine and mask mandate throughout the country needs to end. The mandates have not been as beneficial as advertised by proponents such as Dr. Fauci, instead, have been extremely detrimental in many respects.

All workers need to return to their jobs and their offices. Our school teachers must return to the classroom. Remote learning does not work and has been an unmitigated failure. Students need to learn in the classroom, around their fellow students. They also need to see facial expressions of their classmates and teachers. All masking requirements are akin to child abuse and need to be eliminated.

Instead of trying to alleviate the fears of some teachers, it is time we started focusing on the next generation and what is best for our children, who have been harmed tremendously in the last two years. Children, who have an extremely high survival rate if infected by this virus, have been forced to suffer unnecessarily.

Over the last two years, major retailers and Internet giants have profited handsomely. While Walmart and other “big box” stores were allowed to remain open, small businesses were shut down. These small businesses employ most Americans. Many of those “mom and pop” businesses who shuttered have never reopened.

Our small businesses have been devastated by the federal government’s payments for Americans to stay home and not work. We must end these incentives and encourage Americans to return to their jobs. In this way, we will enable small businesses, the backbone of our economy, to remain open.

Sadly, the cure has been worse than the disease. While government officials locked down the country, issued mandates and promoted anxiety, millions of Americans suffered from deep depression. Of course, suicides have increased, especially among young people, and drug overdoses are at record levels. In the twelve-month period ending in April of 2021, there were 100,306 drug overdose deaths, an increase of 29% from the previous year.

While millions of Americans were fearful of leaving their houses, other health ailments were left untreated. One study indicated that 11% of adults delayed needed medical care due to COVID-19 fears. Predictably, this has resulted in too many Americans senselessly dying

The general health, psychological and economic toll of this virus on the United States and the world has been incalculable. There is no value that can be placed on the loss of priceless human life, but there is an assessment of the tremendous economic costs. In just the first year of the pandemic, it was estimated that the virus led to an economic loss of approximately $16 trillion.

Enough is enough, it is time we followed the lead of the good citizens of Denmark who are ending all virus restrictions. At the very least, we need to find inspiration from citizens worldwide who are fighting back. For example, the mandate protests in Europe have been massive and are growing. The Canadian truckers “freedom convoy” was labeled a “fringe minority” by the progressive fool of a Prime Minister. However, it was such an amazing success that Ottawa was shut down and the Prime Minister was forced to flee the city.

President Donald Trump certainly understands the needs of the country. At his Texas rally on Saturday night, he said, “It is time for the American people to declare independence from every…Covid mandate…tell this band of hypocrites, tyrants and racists that we’re done with having them control our lives; mess with our children and close our businesses. We’re moving on from COVID, whether they like it or not.”

President Trump is right, it is high time we returned to our lives, our businesses, and our families. We must stop listening to the purveyors of fear and start embracing the great American legacy of freedom. Otherwise, our future generations will not live in liberty, but will live under the oppressive rule of tyrants.