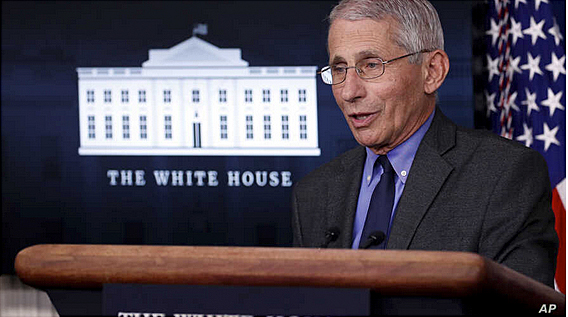 Dr. Anthony Fauci, the Director of the National Institute of Allergy, and Infectious Diseases (NIAID), has been a constant fixture in the media since the outbreak of COVID-19 in late 2019. Despite the relaxation of mandates and the falling virus death rates in the United States, Fauci continues to generate media attention.

He loves the media, and they love his “doom and gloom” message. In recent weeks, Fauci has been advocating for all Americans to vaccinate, including young people, and warning about the dangers of new variants.

This week, he appeared on a video for President Joe Biden. He called the “Delta variant” even more dangerous than the original virus. Fauci claimed it was “more transmissible” and a “variant of concern” especially to young people. The message was to get vaccinated “before it’s too late.”

This dire warning is in direct contrast to the evidence released in the United Kingdom. Their latest government report shows the fatality rate for the “Delta variant” to be 0.1%, lower than the “Alpha,” “Beta” and “Eta” variants. Why would Dr. Fauci misrepresent the threat of this new variant? Possibly to continue the COVID-19 public hysteria and his role as the media darling.

Fauci has served in his position since 1984, decades too long. There are good reasons to limit how long politicians and leaders of government bureaucracies should remain in office. It is an effective protection against corruption. After 37 years, Fauci has accumulated vast power and has become the highest paid person in the federal government, making $434,312 annually, an outrageous amount considering his pathetic COVID-19 track record.

While the media, President Biden and congressional Democrats have anointed him as the nation’s premier virus expert, in reality, Fauci has been a total failure. Throughout the pandemic, his recommendations have changed on vital issues such as masks and social distancing.

Not surprisingly, Fauci is losing credibility with the American people. A new Fox News poll indicates that 60% of Americans believe that COVID-19 emanated from the Wuhan Institute of Virology, the Chinese bio-laboratory. This is almost double the number of people, 31%,  who believe the virus started naturally in a Wuhan wet market. Thus, a strong majority of Americans reject the claims of Dr. Fauci, who continually downplayed the laboratory leak theory and insisted it was much more likely the virus started naturally.

Even bigger problems for Dr. Fauci involve accusations that he lied to the public. In a new book, Nightmare Scenario: Inside the Trump Administration’s Response to the Pandemic That Changed History, written by Washington Post reporters Yasmeen Abutaleb and Damian Paletta, it is revealed that in April 2020 Fauci “reluctantly agreed” to terminate a $370,000 National Institutes of Health (NIH) grant to a non-profit group that worked closely with the Wuhan bio-lab. Fauci initially challenged the termination until he discovered that President Donald Trump supported the cancellation.

Several months later, in testimony to Congress, Fauci claimed that he had no idea why the grant was revoked. This discrepancy infuriated U.S. Representative Buddy Carter (R-GA), who blasted Fauci for being “so obsessed with maintaining his own relevance and downplaying President Trump’s role in combating this crisis that he’s once again been caught lying.” Carter believes it is “time for Dr. Fauci to go.” Of course, he is right, Fauci should have been removed from his position long ago.

U.S. Representative Markwayne Mullen (R-OK) also lamented Fauci’s obvious deception. He called the discrepancies “very concerning” and said an investigation should be launched to discover “how the pandemic happened and what Dr. Fauci knew and when he knew it.”

Due to Fauci’s discrepancies and controversies about the origins of the virus, House Minority Whip Steve Scalise (R-LA) has called for “a full investigation by Congress.” Over 200 U.S House Republicans have joined Scalise in demanding that Speaker Nancy Pelosi (D-CA) investigate the origins of the virus and the role of the Chinese Communist Party is hiding the truth from the world.

For months, U.S. Senator Rand Paul (R-KY) has debated Dr. Fauci on everything from mask mandates to herd immunity to the U.S. funding of “gain of function” research, which involves modifying viruses to make them even more transmissible to humans. In a 2012 paper, Fauci argued that the “benefits” of “gain of function” research would “outweigh the risk” of a potential lab leak. Sadly, seven years later, after the United States, under the direction of Dr. Fauci, directed a NIH grant be awarded to EcoHealth Alliance, which funded this type of research at the Wuhan lab, COVID-19 was unleashed on the world.

Contradicting Fauci’s claims, evidence is growing that the virus started in that Wuhan lab. In a recent Wall Street Journal investigation their reporters disclosed that U.S. intelligence services have information that numerous workers in the Wuhan lab required hospitalization in late 2019 after experiencing symptoms matching COVID-19.

When the treasure trove of Dr. Fauci’s emails were released in early June by Buzzfeed News, Paul indicated his support for the firing of the NIAID Director. He tweeted, “Can’t wait to see the media try to spin the Fauci FOIA emails.” The emails showed Fauci receiving praise for backing the theory that the virus was contracted naturally in the Wuhan wet market.

The emails also showed Fauci downplaying the effectiveness of masks. In February of 2020, Fauci wrote, “Masks are really for infected people to prevent them from spreading infection to people who are not infected rather than protecting uninfected people from acquiring infection…typical mask you buy in the drug store is not really effective in keeping out virus, which is small enough to pass through material.” Fauci famously changed his position later in 2020 and became one of the world’s foremost advocates of masks.

Today, Dr. Fauci is desperately trying to maintain his credibility, but the truth is catching up to him. He is not a national treasure, instead, he is a fraud, who is trying to cover-up one of the biggest scandals in American history.

Jeff Crouere is a native New Orleanian and his award winning program, “Ringside Politics,” airs locally at 7:30 p.m. Fridays and at 10:00 p.m. Sundays on PBS affiliate WLAE-TV, Channel 32, and from 7-11 a.m. weekdays on WGSO 990-AM & www.Wgso.com. He is a political columnist, the author of America’s Last Chance and provides regular commentaries on the Jeff Crouere YouTube channel and on www.JeffCrouere.com.