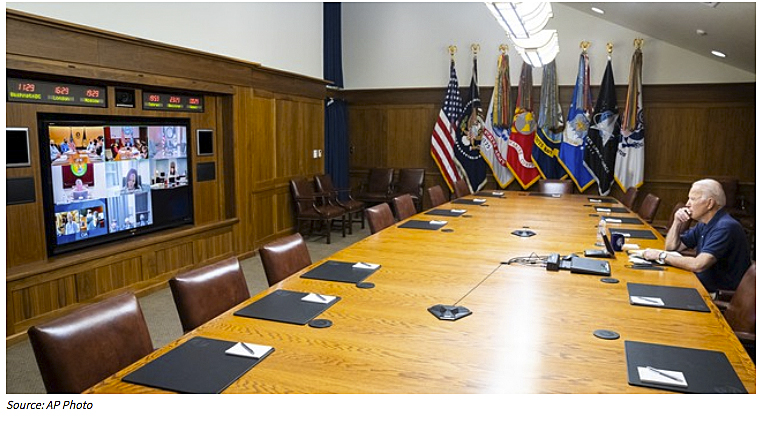 What About the American Hostages? by Jeff Crouere

Whatever the real number of hostages, it is outrageous that President Joe Biden ordered the withdrawal of our military before securing the release of every American in Afghanistan. We should never have left the fate of these Americans in the hands of the Taliban, a group that allowed terrorists to plan the 9/11 attacks in their country.

The Taliban is closely affiliated with Al-Qaeda, which organized the attacks that killed 3,000 innocent Americans on 9/11. Upon our withdrawal, Al-Qaeda is back in Afghanistan, along with ISIS-K and other terrorist organizations. Thus, the Taliban are not only back in power, but are also stronger than ever because they will be able to use billions of dollars of military equipment that President Biden left behind in Afghanistan.

Such equipment should have never been given to an organization that does not believe in women’s rights and adheres to a radical form of Sharia law that calls for stoning to death citizens that do not follow these draconian requirements.

Our country has been fighting the Taliban for 20 years in Afghanistan. This group has killed over 2,400 of our American military service members and almost 4,000 military contractors. Another 66,000 Afghan national military and police were killed by the Taliban. In addition, thousands of others have been seriously wounded or mentally scarred by America’s longest war.

This group of killers is now going to determine the fate of possibly hundreds of Americans, thanks to President Biden. It is a hostage situation because these Americans are not being allowed to leave the country. There are reports that the hostages are in danger as Taliban terrorists are going door-to-door looking for them.

This deadly situation was confirmed by one hostage, Nasra, using only her first name because of her fear of being identified, who told the Voice of America that the Taliban are “hunting Americans.” According to Nasra, the Taliban are “apparently…going door-to-door…trying to see if anybody has a blue (American) passport.”

Nasra and other Americans in Afghanistan are living in true fear. It is reminiscent of another American hostage situation. In 1979, 53 Americans were taken hostage by extremist Islamic “students” at our embassy in Tehran, Iran. When this happened, our country was consumed by the compelling story. For example, the ABC news program, Nightline, was created by the coverage of the hostage situation.

This humiliating crisis was one of the major reasons why President Jimmy Carter lost his re-election bid in 1980 to Ronald Reagan. Millions of Americans blamed Carter for not rescuing those hostages. Eventually, the hostages were released after 444 days in captivity, in the immediate aftermath of Reagan’s inauguration on January 20, 1981.

In this case, many more Americans are being held hostage by another radical Islamic group, the Taliban, in Afghanistan. While our hostages in Iran were held in one location, the American embassy, our Afghanistan hostages are located all over the country.

Our hostages are in extreme danger, but their plight is being totally ignored. Unfortunately, the Biden administration, the media, and Democrats are no longer focusing on Afghanistan. The left wants to “move on” from the Afghanistan debacle and highlight other issues, such as the U.S. Supreme Court decision on the Texas abortion law.

The left realizes that the tragedy of American hostages in Afghanistan will politically bury Joe Biden and the Democrats, so it will not be covered. Without any media attention or pressure, these Americans will face even more danger living in a country controlled by terrorists.

Since our military has been removed from the country, the Biden administration is touting supposed diplomatic and economic pressure that will be used to persuade the Taliban to release these Americans. Some in the Biden administration are even discussing a working relationship with the Taliban. Of course, it is insane to discuss any type of affiliation with a group that killed so many Americans and is still holding American hostages.

As we celebrate Labor Day 2021, Americans must not forget that so many of our citizens are being held hostage. President Biden and the Democrats should not be allowed to “move on” to other issues until every American is freed.

We must remember that the Afghanistan withdrawal was an unmitigated calamity that put our national security in peril. Amazingly, the insufferable Joe Biden still refuses to admit wrongdoing and blames everyone else for his horrific mistake of withdrawing our troops while hostages remained in the country.

After witnessing this tragedy, Americans are uneasy and souring on President Joe Biden. It is no surprise that his poll numbers are dropping as he does not inspire confidence and his word is worthless. Biden repeatedly lied about the operation in Afghanistan and continues to show no remorse for his actions.

To make matters worse, he acted in a disrespectful manner at the ceremony for the 13 American military service members who were killed in Afghanistan. At the dignified transfer, Biden kept looking at his watch. This disgusted the Gold Star family members who attended. The insult was compounded when Biden made remarks that focused on the loss of his son, Beau, rather than the loss of these grieving parents.

A president who will not properly honor our brave military heroes will not care about hostages being held by our enemy. Thus, it is imperative that the American people continue to advocate for the release of their fellow citizens. While the left wants to change the subject, the American people must keep the pressure on until the freedom of these hostages is secured.

Jeff Crouere is a native New Orleanian and his award winning program, “Ringside Politics,” airs nationally on Real America’s Voice Network, AmericasVoice.News weekdays at 7 a.m. CT and from 7-11 a.m. weekdays on WGSO 990-AM & Wgso.com. He is a political columnist, the author of America’s Last Chance and provides regular commentaries on the Jeff Crouere YouTube channel and on Crouere.net. For more information, email him at jeff@ringsidepolitics.com