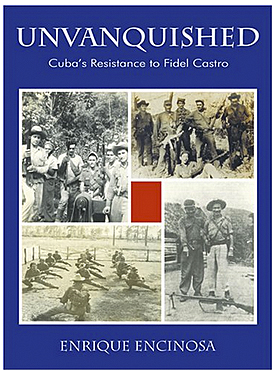 Unvanquished: Cuba’s Resistance to Fidel Castro is a cliffhanger, non-fiction book that reads like a novel. It’s the stupendous work of the serious scholar, Enrique Encinosa, who has written the definitive works on the guerrilla wars waged by anticommunist Cuban rebels against the repressive, totalitarian regime of Fidel and Raul Castro. His original masterpiece, Cuba En Guerra: Historia De La Opocision Anticastrista, 1959-1993, has now been updated and abridged for the Anglo-American public and published in English!

This book is not for the easily offended or fainthearted. The poignant text, carefully annotated, and the product of meticulous research with a succinctly arranged text, is accompanied by graphic photos of rebel leaders with machine guns and bandoleers, armaments, armed rebel battalions, and also pictures of those who died attempting to bring freedom to Cuba or captured and executed by the communist dictator.

Why would campesinos (peasants), workers, and students pick up arms and lead open revolts in the Escambray Mountains against Castro’s “worker’s paradise?” Why would Cuban exiles living good, comfortable lives in Miami with their families leave to go back to the hell of communist Cuba, breach communist defenses to conduct clandestine operations, infiltration, and uprisings against Fidel Castro’s communist government? You must read this book to find out.

You will find heroism fighting communist repression in these pages—although most of the time there was little chance of winning. The Castro brothers were bolstered by the Soviets; America and the CIA had ceased helping the rebels long ago.

This 229-page book has a complete bibliography, Oral Sources, and a written index. It is illustrated with poignant photography. The book is easy to read and should be displayed prominently in the library of (and after having been read by) all freedom-loving people, those who truly want to know the unvarnished truth about Cuba’s communist regime.

What was the cause of the unknown war fought in Cuba’s Escambray Mountains, 1959-1965, for example? Like the kulaks of the former Soviet Union exterminated by the Soviets under Joseph Stalin in the 1920s and 1930s, the anticommunist rebels called alzados were campesinos (rural people, peasants) who fought heroically the communist invaders, who had taken their land and forced them into collective farms in the name of agrarian reform. I will say no more. Suffice to say that this is the story of those who have fallen in the effort to liberate Cuba, and their stories have not been told, until now!

Those who have opined that Cubans have not fought enough to obtain their freedom should read Encinosa’s chronicle. This is the story that proves them wrong. This little tome chronicles the previously unwritten and little-noticed, heroic efforts of those who have tried to bring freedom to Cuba by armed insurrection from inside and outside Cuba, efforts that have been ignored by the American media.

Mr. Encinosa deserves the highest praise for his achievement! I highly recommend this book to all readers interested in the tragic fate of Cuba and want to learn more. You will be rewarded with enlightenment for your well-worth effort at finding the truth.

This article may be cited as: Faria MA. Unvanquished: Cuba’s Resistance to Fidel Castro by Enrique Encinosa. HaciendaPublishing.com, July 27, 2011. Available from: https://haciendapublishing.com/unvanquished-cubas-resistance-to-fidel-castro-by-enrique-encinosa.