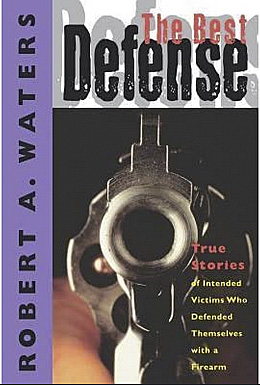 The Best Defense by Robert A. Waters

This book recounts true stories of intended victims who defend themselves with firearms. It is a must-read book for the millions of Americans who already own firearms, or those who intend to buy, or even think of buying, a gun for self-defense or home and family protection.

While these easy to read chapters make gripping stories, they also provide didactic lessons in citizen self-protection, factual information on why law-abiding citizens must be capable of protecting themselves and their families from vicious predators and criminals, because, as these stories clearly demonstrate, the police simply cannot be there to protect every citizen every time a crime occurs. Here are some of the very valuable lessons we learn:

The dramatic denouement chapter, “The Last Ride of the Dixie Mafia” keeps you at the edge of your seat, but you might already be there from the preceding chapters.

The book should be read not only by all citizens who own firearms for self- and family protection, but also by those who don’t — particularly, gun-banning politicians who believe the Second Amendment is outdated and intended only for duck hunters. After ten years, I still remember some of the dramatic episodes. Get this book and read it! I am reading both of his newer books — Guns Save Lives and Guns and Self-Defense — as well.

Miguel A. Faria, M.D., is Associate Editor in Chief in socioeconomics, politics, medicine, and world affairs of Surgical Neurology International (SNI).  He is the author of Vandals at the Gates of Medicine (1995); Medical Warrior: Fighting Corporate Socialized Medicine (1997); and Cuba in Revolution: Escape From a Lost Paradise (2002). His recently released book is America, Guns, and Freedom: A Journey Into Politics and the Public Health & Gun Control Movements (2019).

3 thoughts on “The Best Defense by Robert A. Waters”