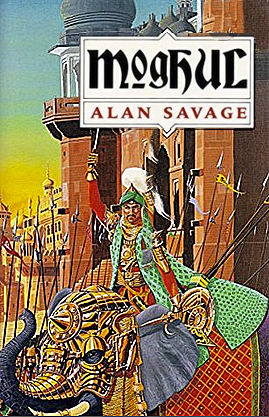 From Babur to Aurangzeb — India under the Moghuls

Moghul by Alan Savage, a pseudonym for a prolific British novelist, is a historic novel of adventure, sex, and brutality of epic proportions. As with Ottoman, Alan Savage’s previous dazzling adventure tome, this novel concerns and revolves around a fictitious (and not quite) renegade English family of male descendants, the Blunts, who while preserving some of their English identity through several generations, nevertheless, serve faithfully the ruling Moghul dynasty of Northern India (Hindustan) and Afghanistan. The time span is close to that of the chronicles of Savage’s previous novel, Ottoman, a time period concurrent with the late Renaissance in the West (spanning the late 15th through the early 17th centuries) with which Savage seems to be quite conversant.

Savage is also intimately familiar with the very early Renaissance of 14th century Italy, as noted in his subsequent masterpiece, Queen of Night (1993). All of these books are full of adventure, intrigue, betrayals, wars, sex and violence, and are not meant for readers with delicate sensitivities and prone to easily take offense. Women in our present zeitgeist may not appreciate Savage’s portrayal of women as servile sex objects, and men as being depicted as savage and cruel warriors, but the novelist is depicting men and women of flesh and blood in a different culture in a different time. They may decry his tone and depictions but, frankly, not the historical background, which is substantially accurate.

While the Blunts and many of the minor characters they come in contact with are fictitious, the major historic figures and the principal events in which they take part are historic.

Despite wars, treachery, savagery, massacres, pillage and plunder, the various Blunt men serve the Moghuls with amazing loyalty as commanding officers, although during insurrections and internecine warfare among the ruling Moghuls, they may occasionally side with the losing side and pay the dire consequences. Be that as it may, a younger Blunt is always ready to step in and assume the burden, the family continually serving the ruling emperor. The Blunt women are beautiful, bought maidens or captive slaves, European, Hindu, or more frequently Moslem, who become wives or concubines, and, by in large, fulfill their roles as submissive sexual partners and sometimes confidants. In time, they also become devoted mothers, who rule in the palaces and help the Blunts maintain a unique if precarious existence — half-Christian, half-Moslem; half-English, half-Moghul; half-civilized, half-barbaric — while safeguarding their homes and, as best they can, the troubled consciences of the Blunt men they come to love!

The Blunts serve in the armies and/or in the palace guard of the ruling Moghuls. Several successive Blunts with lofty military titles, such as “Blunt Bahatur,” “Blunt tuman-bashi,” or “Blunt Amir,” serve the all powerful “Badishahs” or Great Moghuls of Delhi and Agra in their wars of conquest in Hindustan against the various enemies: the gallant Rajput cavalry; in Kabul and Afghanistan against their long-time enemies, the Persians; in northwestern India against the mountain Patha tribesmen and Sikhs; and in central and southern India against the indomitable Mahratta confederacy. And so the fictitious Blunts live and die serving the Great Moghuls: Babur (1526-1530), the founder of the dynasty, a warrior chieftain who came from Kabul, dictated his memoirs, and claimed descent from both Genghis Khan and Tamerlane; Humayun (1530-1556), his son and less worthy successor; Akbar the Great (1556-1605), his son, another great ruler, a gifted warrior, as well as a tolerant unifier and enlightened administrator; Jahangir (1605-1627) and his famous wife, Nur Jahan, and once again a depraved son followed a great ruler; Shah Jahan (1628-1658) and his beautiful wife, Muntaz Mahal, for whom he built the great wonder of the world, the Taj Mahal mausoleum; and Aurangzeb (1658-1710), his son, a puritanical, intolerant, fanatical Moslem, and cruel and savage ruler, who bankrupted the nation and brought untold misery to India. Under Aurangzeb, the last Blunt and his son were to be executed but at the last minute are saved by the bell, the sudden death of the Great Moghul then in his nineties. Not only the Blunts in fiction, but all of India in historical fact, gave a sigh of relief. The book ends, as the last Blunt plans to move to Bombay with his family to forgo the decadent Moghuls who followed as rulers and work for the English East India Company to help his native India become a better country. The Moghul empire was now in full decline, the East India Company was in ascendancy, and by the mid-19th century the British would fully rule India.

This is an excellent historic novel, but it is not for the squeamish; there is plenty of sex and rape, blood and violence, impalements and executions, reflecting the mores and barbarism in India under the Moghuls. With this caveat, the historic novel is recommended for readers interested in the history of the period, written with flare and suspense, as well as the usual and expected novelistic license. (4/5 rating)

This article may be cited as: Faria MA. From Babur to Aurangzeb — India under the Moghuls. HaciendaPublishing.com, January 13, 2014. Available from: https://haciendapublishing.com/from-babur-to-aurangzeb–india-under-the-moghuls.

The photographs used to illustrate this book review for Hacienda Publishing came from a variety of sources and do not appear in Alan Savage’s Moghul.