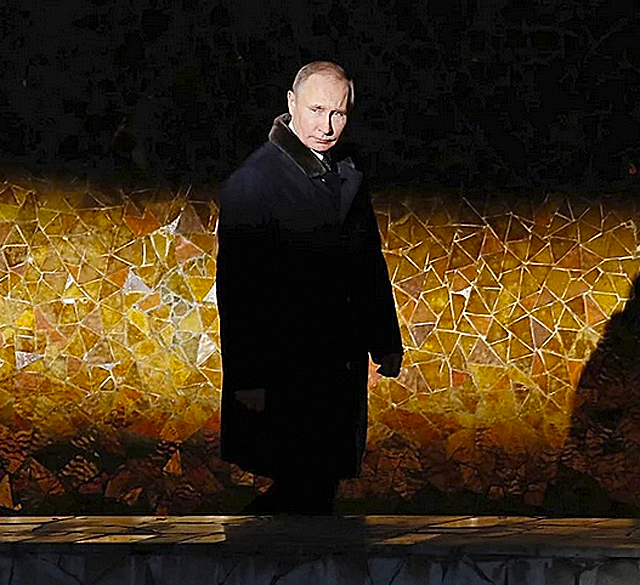 In response to a haciendapub.com reader asking for more information on Anatoliy Golitsyn’s predictions of long-range strategic communist deception and worrisome developments throughout the world, not only Russia but also China, Germany, and the U.S., I asked Dr. Russell L. Blaylock, HaciendaPublishing.com contributor, to comment on these developments. As usual, Dr. Blaylock went the extra mile with an excellent paper that immediately follows. In view of the new incident at the strait of Kerch at the entrance of the Sea of Azov in the Crimea in which Russia attacked, fired upon and seized three Ukrainian ships, taking prisoners including three wounded Ukrainian sailors, we are placing this article on the front page again.— Dr. Miguel A. Faria

It would be nice to believe that communist control of the Russian Federation ended with the announced fall of the Soviet Union, but there is growing evidence that this may be an illusion created by the admirers of Ronald Reagan, of which I am one. It is nice to think that President Reagan’s military growth policy bankrupted the Soviets and forced their collapse. Yet the very idea that “forcing the Soviets” to spend more money on defense caused their economy to falter is ludicrous, as they already assigned a great deal of their wealth to the military.

My friend Joe Douglass, Jr. gave me abundant evidence that this “collapse of the Soviet giant” was not so and it was my good friend and Soviet expert, John Lenczowski, who first told me of Golitsyn’s book, New Lies For Old. He also gave me some other evidence, principally on the situation in Czechoslovakia, that demonstrated a staged KGB episode disguised as a spontaneous rebellion against Soviet control of the country.

It is of interest that the CIA economic analysts and many others concluded that the USSR was financially viable and was in no danger of collapse right up until the time of the collapse. Independent analysts, at least one, concluded that the Soviet experiment was about to collapse based on the inability of a purely socialist country to maintain itself over an extended period. KGB Chairman Yuri Andropov (1914-1984) understood this, as did a number of insiders within he communist apparatus. It was known that even Stalin recognized that the Nazi economic fascist system was more viable than the communist model, being that the bills could be paid by allowing the corporations to continue to produce wealth and products for trade and export, as well as support the building and the maintaining of a massive military complex. Ironically, it was Hitler who learned the same lesson from Benito Mussolini.

Antonio Gramsci (1891-1937) made the case for a transition of pure communism toward a red fascist system, if communism was to survive. This was especially so in the United States. This economic transition in no way altered the ultimate plans of the communists — that is, eventual rule of the entire world by a communist/fascist system. They would do this by aligning with the Chinese communists. Here, as Dr. Miguel Faria acknowledges, Anatoliy Golitsyn was correct when most Soviet experts were dead wrong concerning Soviet designs for various strategic, long-range campaigns of disinformation and deception to undermine the West. This has been further corroborated and expounded upon by the highest-ranking communist defector to have ever reached the West, Romanian Lt. Gen. Ion Mihai Pacepa.

One of our best experts on the KGB (FSB) has been J Michael Waller. In his 1994 book, Secret Empire: The KGB in Russia Today, he notes that the Parliament remained in the hands of the communist party after the so-called fall of the Soviet empire. He also stated that the KGB set up special task forces for the training of political organizations to organize and manipulate the electoral process in favor of KGB-backed candidates.

Further, Waller notes that even the post-Soviet leaders wanted the Soviet security system to remain in the hands of the KGB. Even laws that were supposed to control and prevent abuses by the KGB were in fact without substance. Waller states that “many of the abusive powers they enjoyed when they were known collectively as the KGB,” remained. And further, “As with the USSR Law on State Security Organs of 1991, these laws were not imposed by lawmakers but initiated by the chekists.”

It was true that Boris Yeltsin was the first powerful figure to challenge the authority of the KGB and the Communist Party of the Soviet Union (CPSU). But Waller notes, while the reformers, such as Yeltsin’s Prime Minister Gaydar, moved forward with economic reforms, the chekists continued to have absolute control of security matters.  After Yeltsin, the state still reigned supreme and this required a powerful state security system — the old KGB. In essence, the civil government exercises very little control over the security organs — that is, they operated without any real checks and balances. In essence, Boris Yeltsin was out maneuvered by the chekists. With the replacement of the Ministry of Security and Internal Affairs (MBVD) with the GPU, we witnessed the overriding power given to the state security organs.

The Committee on Defense and Security was established as a permanent Supreme Soviet Body for day-by-day security matters. Waller notes that the members of this committee were carefully chosen and contained mainly active and former members of the KGB, MVD and military officers — controlled as a military-industrial enterprise. Key professional staff members were taken from the military and chekist bureaucracies.

Waller refers to John Lenczowski’s 1990 analysis, in which he notes that as regards the KGB, there were either no real reforms or conditions were even worse. John also noted that few in the West chose to notice the fact that the KGB’s totalitarian taint had not been effectively removed. It was also noted that perestroika preserved “the cult of chekism.” In agreement with Golitsyn, Waller recognizes that Andropov created the base for both perestroika and glasnost to keep the communist system from perishing. A demonstration of the deception by the KGB is noted by the following quote from Waller’s book:

The KGB responded by redesigning its image. The new strategy was to appear almost as a part of the democratic opposition itself. The KGB leadership demanded public laws by which it would be governed, then wrote those laws themselves so that chekist powers could be preserved. These image-making events were carefully orchestrated to give the impression that the KGB was gone forever and something new and beneficial had been erected in its place.

Waller cautions that their image-making campaigns should be carefully studied noting:

In Russia and the rest of the Commonwealth of Independent States, the self-perpetuating chekist culture, financed independently by growing business and organized criminal networks and wielding unknown political clout, reinforces the bureaucratic and social culture that finds dictatorial and otherwise abusive practices acceptable and even standard operating procedure. Further, he notes, “the security organs may be considered Russia’s fourth branch of government if not its core.

In the 1999 book, The State Within a State, the courageous Russian journalist Yevgenia Albats makes a powerful case for the idea that the Soviet state was in fact ruled by the KGB and not the CPSU, as was commonly believed. The fact that for the first time a KGB chairman, Yuri Andropov, attained the presidency of the country was of considerable importance. And according to Golitsyn it was Andropov who recognized the coming economic collapse of the USSR, and that if something drastic was not done to preserve the power of the state in a new form, all would be lost. The solution must, in essence, completely deceive the West that they wished to join the community of nations.

We now see a tremendous rise in communist elements in Europe, the United Kingdom, Latin America, and even the United States. Antifa is growing in ranks among the youth and becoming more violent. The drug culture has destroyed our youth, caused an explosion of criminal activity and growth of gangs nationwide. Our universities and colleges are now havens of leftist indoctrination and revolutionary ideas and actions. Radical, violent groups are growing, such as Black Lives Matter. A growing number of students and young people are embracing socialism as the wave of the future and see U.S. Senator Bernie Sanders as their leader. Sanders was a communist and still holds revolutionary, Marxist/Leninists core beliefs. Some 29 states have passed cannabis legalization under various pretexts, including bogus medical reasons, which will further dull the minds of our youth and dramatically increase the number of neurotics, psychotics and psychopaths in our society, and as a result we can expect more mass shootings and violence. Gun control is becoming more popular, which is the closing of a free society. Sexual deviancy is now mainstreamed and the idea of family is attacked daily. Our heroes are being denigrated, statues and memorials taken down and our history rewritten.

All of these things weaken our nation and move us closer to joining the collectivist governments and socialists movements of the world, ultimately leading to a globalist, one world government — a new world order, which the Russians and Chinese are already doing the utmost to control, courting former enemy countries, such as Turkey and Iran, and organizing political and economic organizations such as the Eurasian Economic Union.

Dr. Russell L. Blaylock is President of Advanced Nutritional Concepts and Theoretical Neurosciences in Jackson, Mississippi. He is Associate Editor-in-Chief in socioeconomics, politics, medicine, and world affairs of Surgical Neurology International (SNI). He has written numerous path-blazing scientific papers and many books, including Excitotoxins: The Taste That Kills(1994), Bioterrorism: How You Can Survive (2001), Health and Nutrition Secrets (2002), and Natural Strategies for Cancer Patients (2003).

This article may be cited as: Blaylock RL. Despite Golitsyn’s warnings, Soviet and KGB mentality still prevail in Russia.  HaciendaPublishing.com. May 22, 2018. Available from: https://haciendapublishing.com/despite-golitsyns-warnings-soviet-and-kgb-mentality-still-prevail-in-russia-by-russell-l-blaylock-md/.